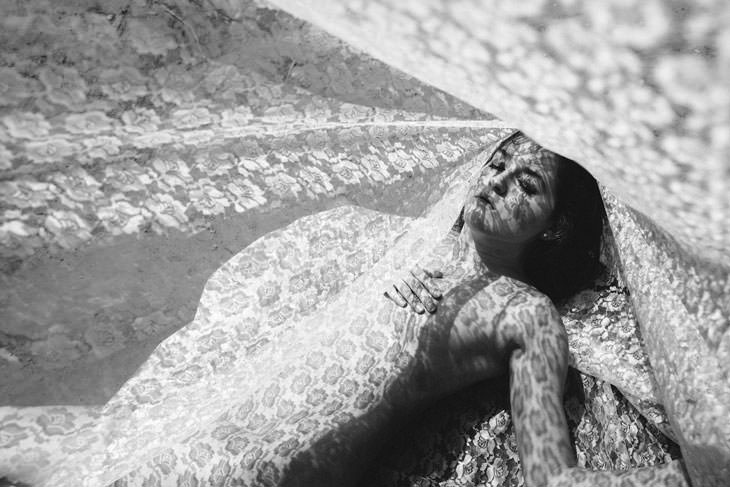 We’re proud to introduce you to upcoming photographer Mark Harless, who goes by Bleeblu. Only working within the photography industry for three years, Bleeblu has established a name and a style for himself as a fashion and conceptual fine art photographer. He is based in Madison, USA, but is willing to travel just about anywhere for photography.
He has been featured, interviewed, and promoted by Dark Beauty Magazine, Redox Magazine, Golden Age Magazine, PADMAG Vision Magazine, Nope Fun and many more. Mark is hoping to make 2014 the year for his photography, in terms of pushing himself and the boundaries he puts on himself when creating.

“I was the kid who stared outside the window during class. I imagined magical places that only existed in my head but didn’t have a way to share it with others. I was born with a beautiful imagination without an artistic bone in my body. It wasn’t until winter of 2011 when I stumbled upon a photo that could change my life forever. The next day I bought my first camera and I’ve held it close ever since. My name is Mark and I’m a photographer specializing in fine art and fashion.” – Mark Harless (Bleeblu) 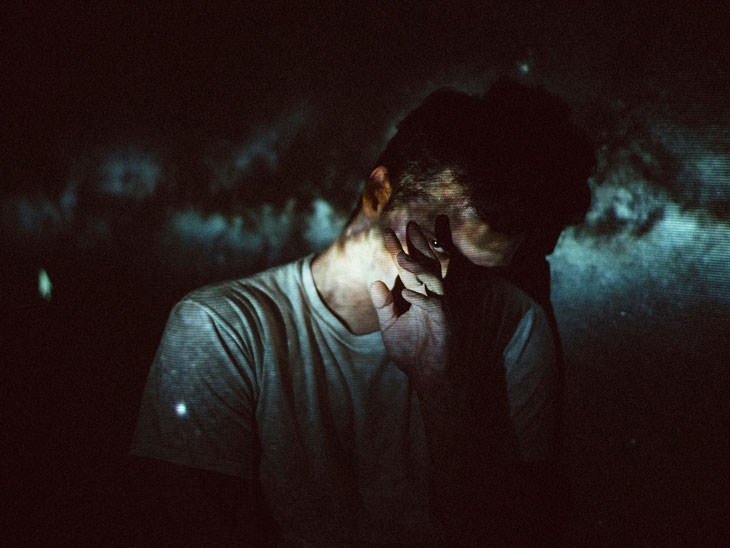 Read along with this down to earth conversation with Mark Harless, where we talk about photography, life, and inspiration. His portfolio of work is intriguing to look at, and his recent experimentation with videography has been done beautifully, which can be seen in this interview also.

And would you believe he’s the biggest PHLEARN fan ever!

Hi Mark! Thanks for doing an interview with us. First off, tell us how did you become interested in photography?

No, thank you!! I can’t believe the website that taught me how to use Photoshop is actually interviewing me!

I’ve always had an interest in photography to some degree. My dad was a hobbyist and he collected a lot of old film cameras. I finally made the jump to buy my first DSLR at the end of a four year long relationship. I decided my time was worth more than just brooding around the house!

When reading the about section on your site it says “it wasn’t until Winter of 2011 when I stumbled upon a photo that would change my life forever.” What was that photo? 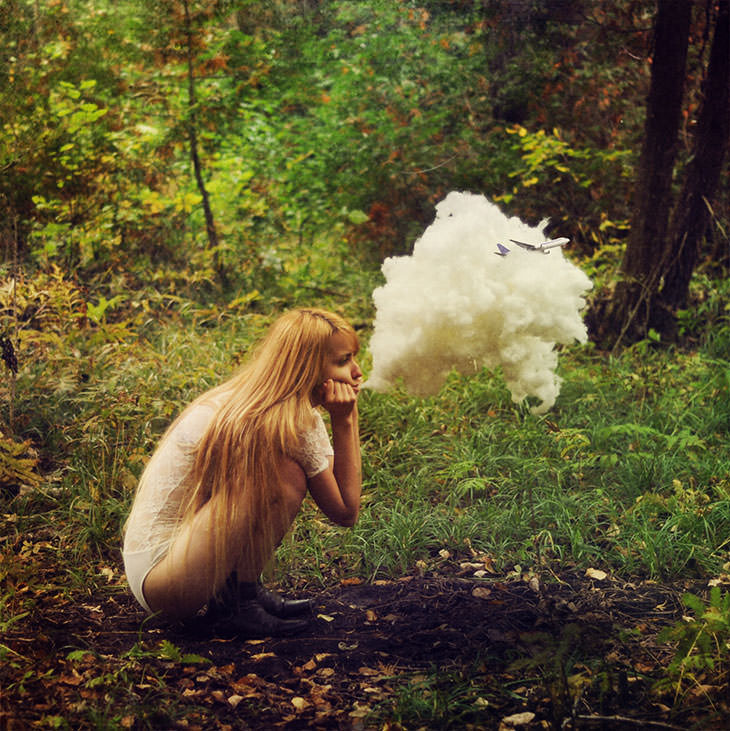 Ah, that photo is Lissy Laricchia’s “Creationism.” I thought it was the best thing I’ve ever seen in my life. I mildly stalked her work, among other photographers, months before I even thought about pursuing photography. Last New Years I was fortunate enough to meet all of my favorite photographers in Atlanta for a Flickr Meetup. It was kind of like meeting your favorite celebrities but not as exciting.

Anything and everything, basically. I’ve came up with ideas from movies, books, music, photos and real life events such as interactions and observations between people. 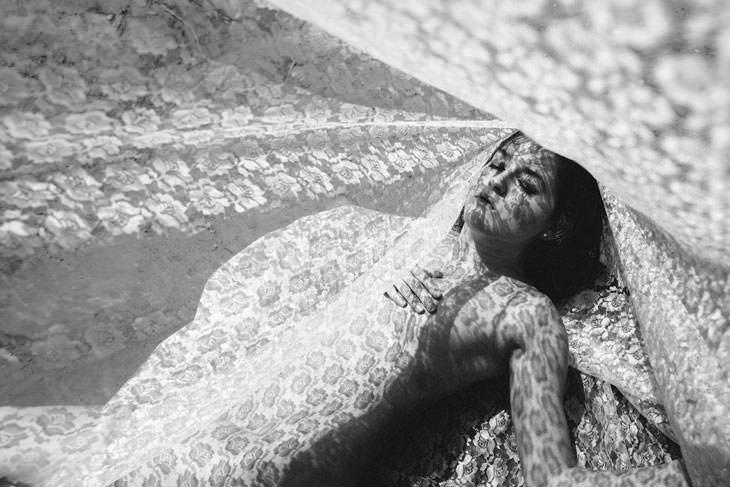 Do you have any formal training in photography or are you self-taught? What things did you find to be best throughout your process of learning?

I’m mostly self taught. I wasn’t going to school when I started taking photos. 95% of everything I do in my photos are things I’ve picked up from around the YouTu- I mean Phlearn that I’ve combined into my own style.

Please tell us about your lovely and haunting series titled “Fertilizer?” Is this series complete, or do you plan to continue to add more to the series?

“Fertilizer” was my attempt at having a reason to put naked people in plastic bags. It wasn’t until I was looking for a title for the series that I come up with the meaning. That death isn’t just the end. It’s not the beginning either. It’s just part of the life cycle. Show me the beginning and end of a circle. After we die our bodies will decompose and the plants and animals will feed off of us in the same fashion a bag of fertilizer would. I thought I completed the series but I’m a little unhappy with the overall mood of the collection. I’ve been considering adding more photos to it because lord knows I have enough trash bags.

Tell us about some of the difficulties that you may not or may have had while shooting fertilizer?

In general, I have a difficult time finding models for my type of work. It doesn’t help that I’m located in the Bible Belt, either. It’s not like I’m just some dude that takes pictures of half naked girls, which, I guess isn’t a false statement so I can’t blame anyone haha!

I don’t really do holidays. I barely say “Happy Birthday” to my friends and Christmas is just December 25th to me. I’m a grinch!

In general when coming up for ideas for shoots do you generally sketch out your ideas before hand? What do you do to help yourself get your brain going?

I’m a pretty shitty illustrator. I like to write down my ideas, with words, instead of stick figures. I usually find myself pacing back and forth or spinning around in my chair thinking of ideas. I find it’s best to visualize yourself actually doing the shoot in your head to come up with good ideas. Where’s the light coming from? What will the weather be like? What could I do to make this even better? 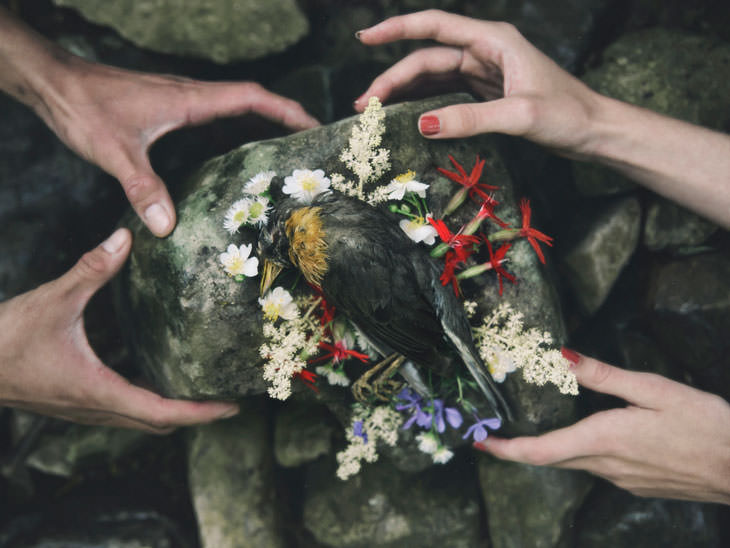 How important is Photoshop and post-processing to your works? Would it be possible to see a before/after? 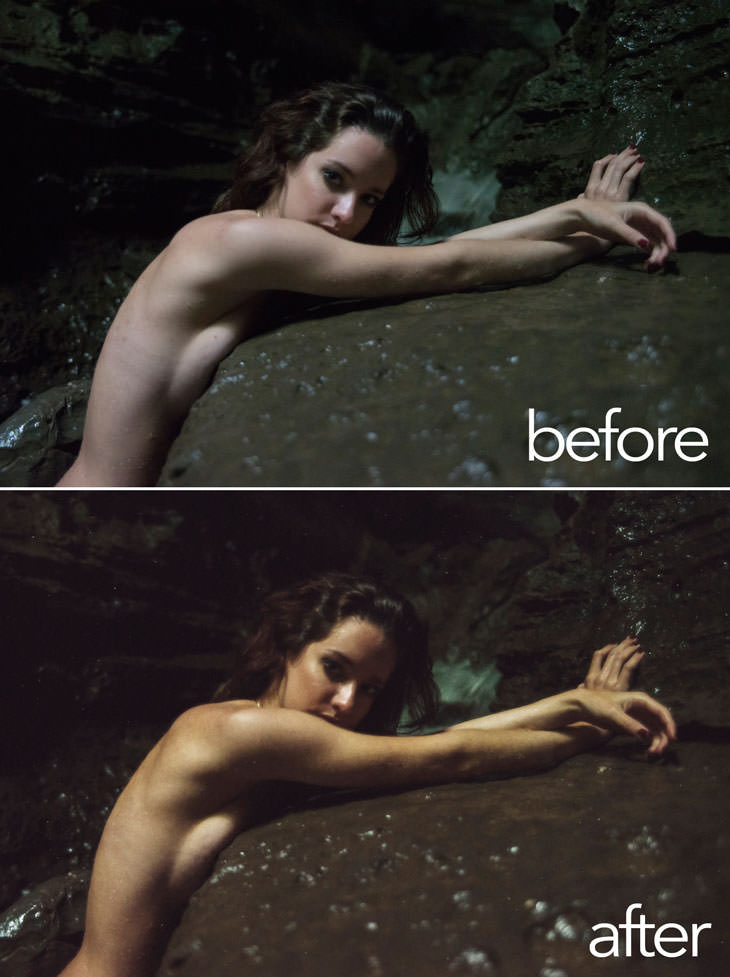 It is of the utmost importance! Post processing can change the mood of a photograph in its entirety. I remember a few months into photography I did a little social experiment. I took two photos of a friend sitting on my bed in her flesh. Just sitting there. Nothing sexual, nothing implied. I took one on a Polaroid using the flash and another on my DSLR and sent them out to some of my friends. The Polaroids were responded with “creepy,” “did you kill her after?” or my favorite, “that looks like a picture you can find in a pedophile’s attic.” The DSLR picture didn’t get any responses like that. So I learned that using a flash could make a somewhat normal photo turn to something that has shock value. 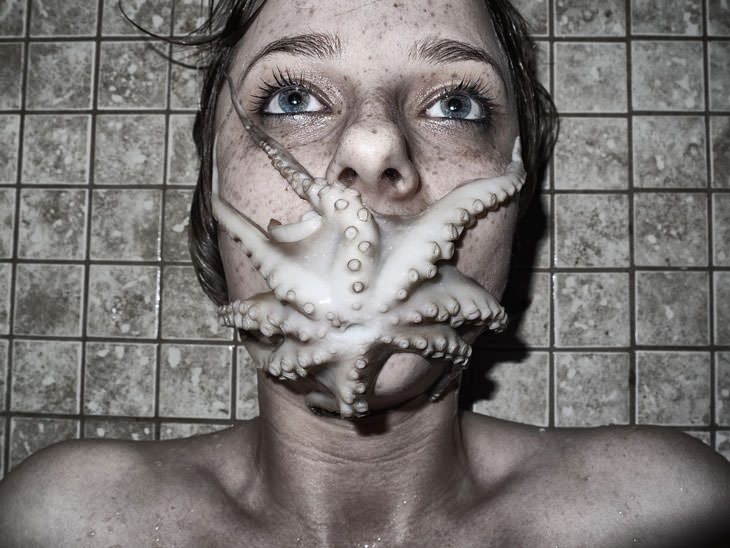 Do you have a favourite lens/ piece of gear/ or tool in your camera bag that you just can’t live without?

Does my camera count?

On July 14th, you told me that you are doing one of your biggest shoots yet. In general, what do you do to prepare for a shoot?

I like to write down a few pictures I envision in my head. Usually I don’t follow them so it’s really weird that I even bother doing that. I mostly just wing my shoots.

So far, what is your proudest moment as a photographer?

Other than being interviewed on Phlearn? Psh, nothing. Duh.

What is your favourite photo that you’ve ever taken?

I have new favorite photos every time I take a picture. Right now it’s this one because Cait can easily replace the Coca-Cola polar bear! 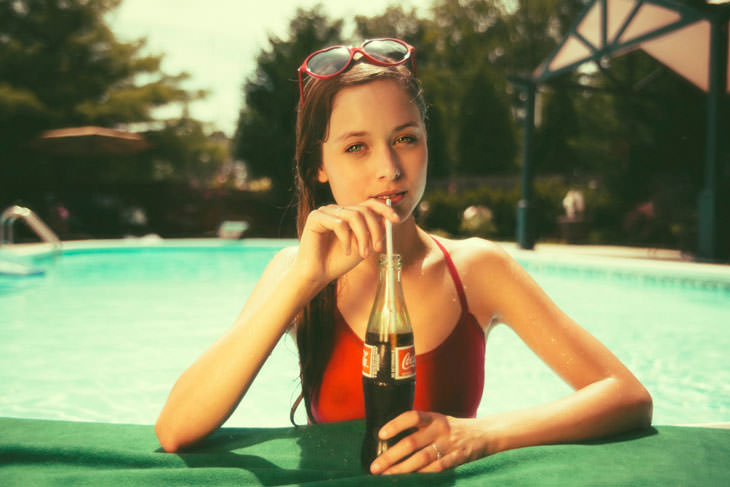 In one of your recent shoots titled “Heart-Shaped” you worked with model Cait Lynch to create one awesome set of photos! To top it off you also created a short 30-second video to go along with it all. How do you like creating video as an accent to your photography work? Will you continue to practice this in the future perhaps?

Thank you so much! Cait is such an amazing model. I ended up editing almost half of the 600 photos I took of her! I think I’m going to start doing little video teasers like the one I did for “Heart Shaped.” I have a much longer one planned for a shoot I’m planning out. I like the idea of being a videographer. I have a few ideas that photographs wouldn’t be able to capture. I’ve just been really lazy trying to figure out how After Effects even works. 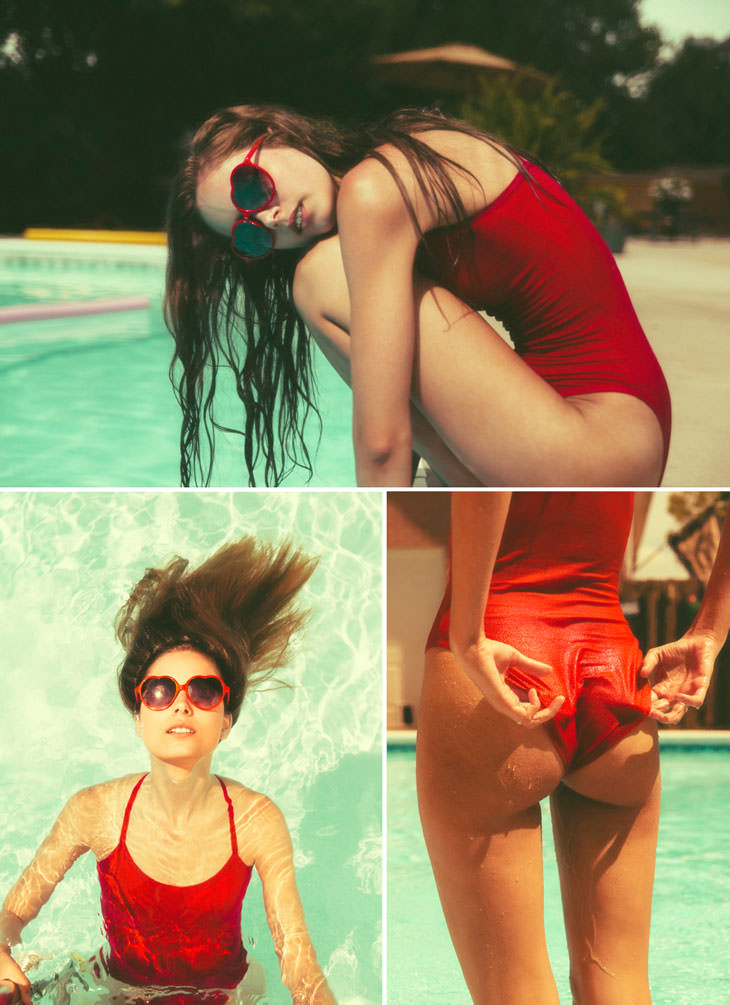 Who are some of your favourite artists and photographers?

What are you currently working on?

I’m trying to make 2014 the year for my photography. I’m pushing myself in directions I wasn’t even considering in 2013. So far, this year, I’ve added nine sets to my portfolio. I’m happy with the quality and quantity I’ve done but I always feel like I can do more and better, you know? Since I’m out of school for the summer I’m trying to squeeze out a few more ideas I’ve had in mind with models I’ve never worked with before. 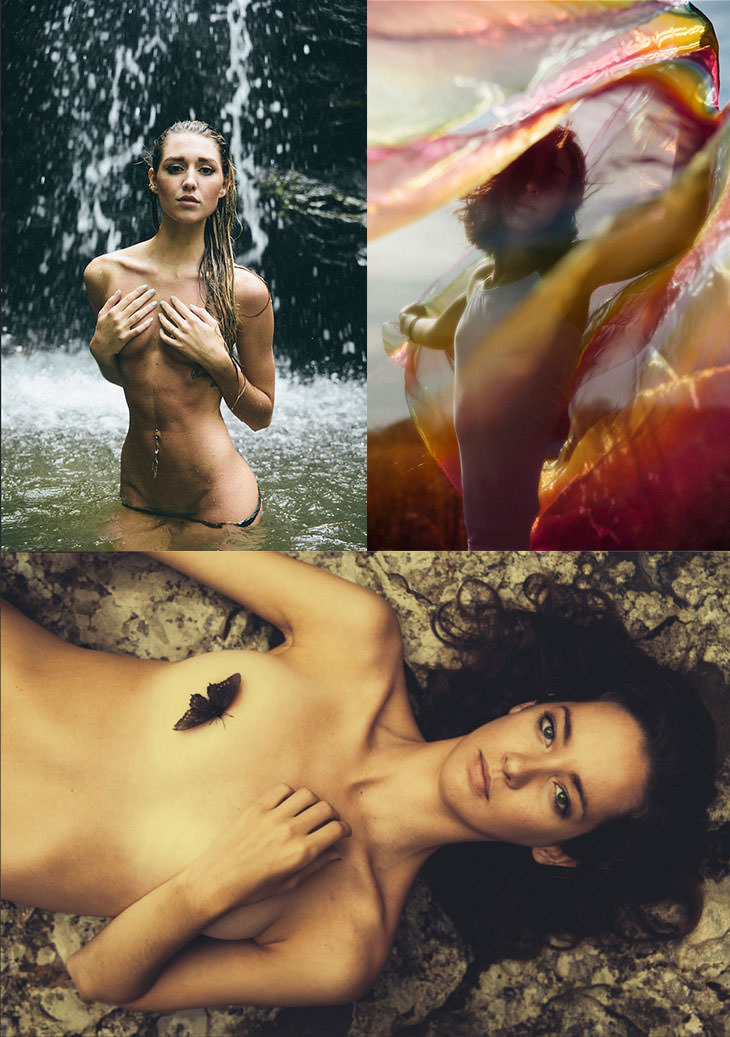 What do you like to do in your free time when you’re not behind the camera?

I enjoy going on hikes and camping. It’s a good way to find new locations to shoot at. Meeting new people to take pictures of is always fun. Really, anything I do has a photographic alternative motive so this question is unfair!

Tell us some of your hopes and aspirations as a photographer and an artist. Where do you want to see yourself in five years?

I just want to be paid to take pictures and travel the world! I don’t know if I’m taking the proper steps in the right direction but I’m enjoying what I’m doing now. 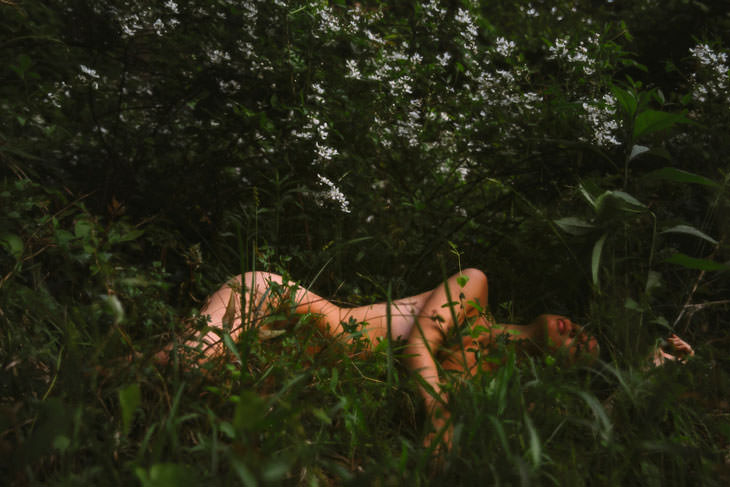 Do you have any advice to offer us fellow photographers and artists? About photography, art, or life?

Don’t ever get too comfortable. Everyone likes seeing cool pictures but if you do the same thing over and over again it begins to get stale. No one likes stale. 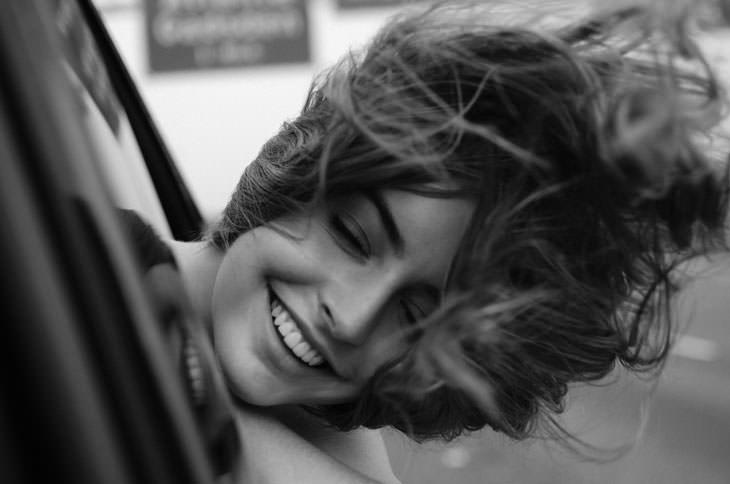