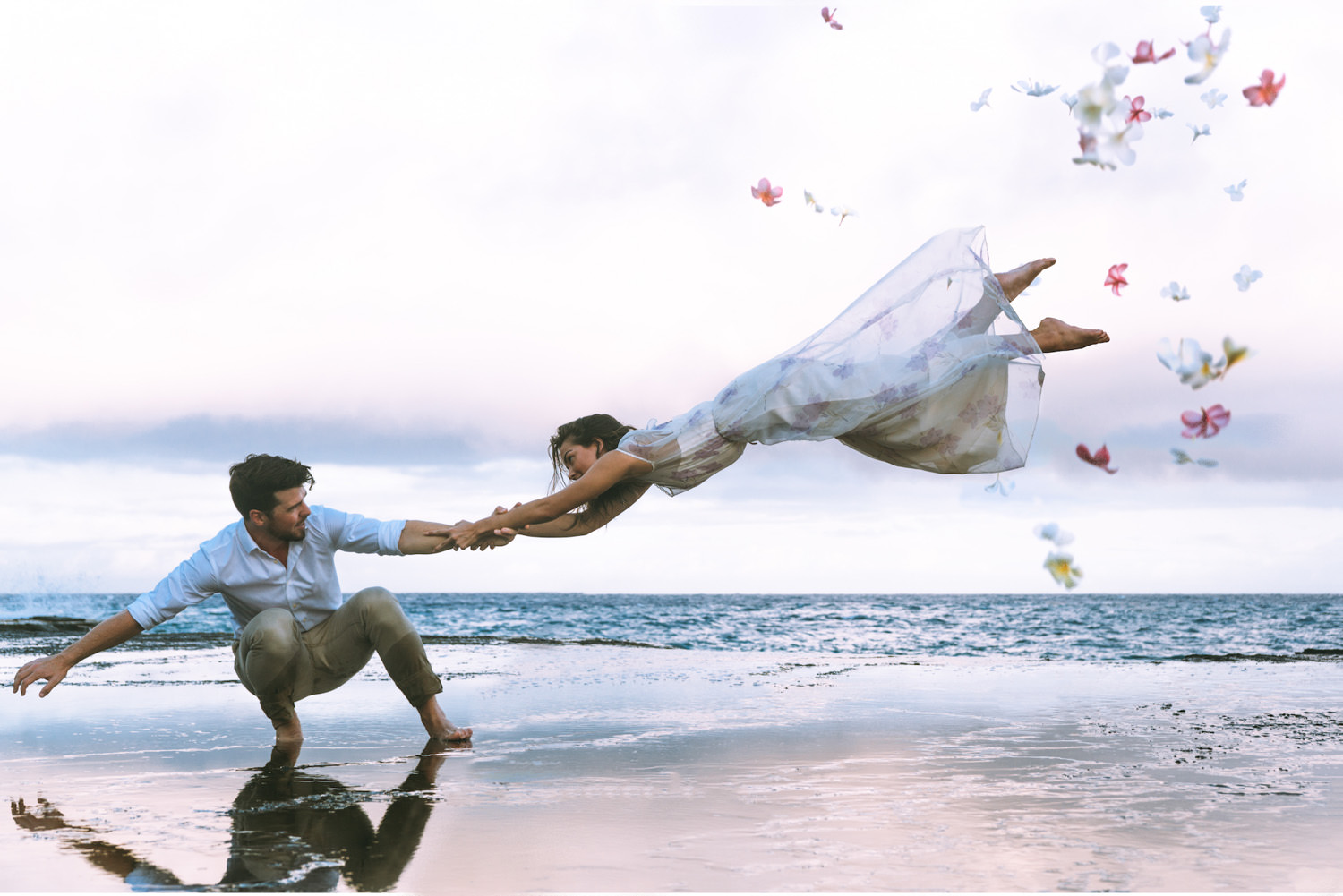 Travel and portrait photographer Christopher James has a special way of lifting his clients’ spirits. His levitation photography lands in the sweet spot between real and unreal, just the right amount of unbelievable and believable. Today, we have the pleasure of learning more about the Hawaii-based photographer. 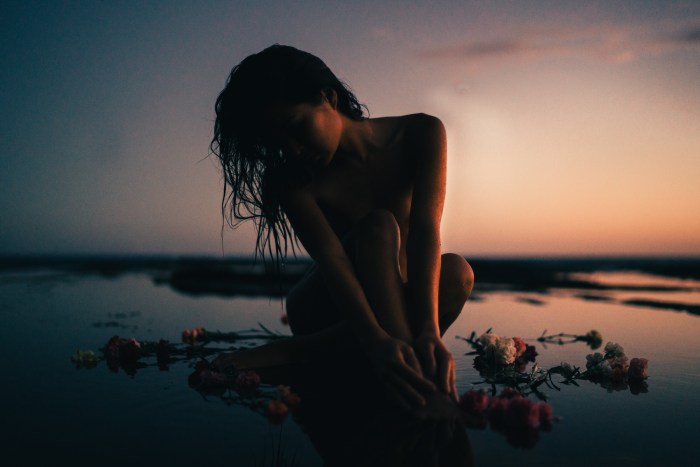 Do you have any quotes or mantras that you repeat to yourself as you go about your life and work?

It seems like, as artists, the highs and lows are exaggerated; creativity boosts versus the slumps. And sometimes, when you’re in that low, or you’re lost and you’re not sure if what you’re doing is valuable or productive, it feels like you’re in the dark. But coming to the realization that all other creatives feel this way, at some point or another, it means that we are in there together. I think that’s uplifting. We are all working, doing our best, and going through our highs and lows. We are all in the dark, but we’re in the dark together. When I hit lows, I remind myself of that; it’s not unique to myself, which I think helps me push out of it. 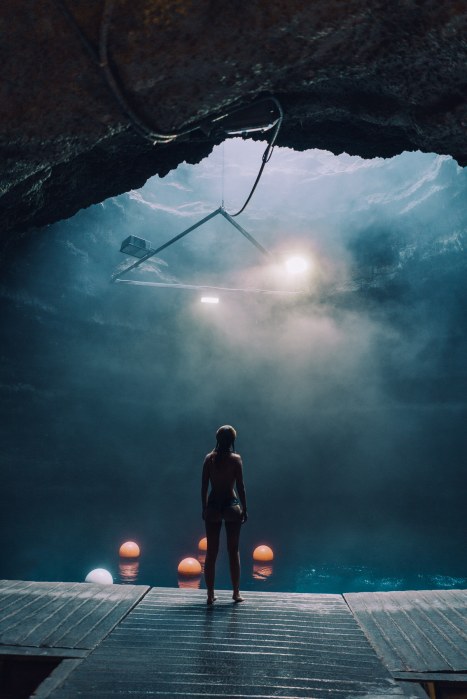 When did you begin to consider yourself a photographer and artist?

CJ: The first time I got a booking, the first time someone paid me, and it was like $200 or something like that. It was then I realized this was marginally profitable, but I enjoyed doing it, and that if I worked harder, pushing myself and improving my work, I could do it more. That was kind of a big leap for me, this was maybe about three years ago. 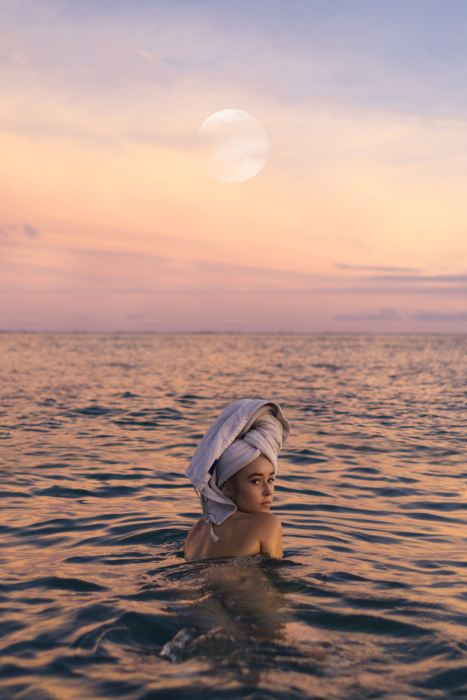 Leading up to that paid opportunity, what were you doing to share your work or pursue photography projects?

CJ: I had the benefit of beginning in photography right as Instagram was beginning to blow up, so I rode that wave quite a bit, using hashtags and such. But Hawaii’s a great place because there are a lot of couples, so I started to hang around the beach and approached a couple to offer to take a photo for them. The first couple I asked was that paid shoot.

Are there any other photographers or artists that you take cues from, or are influencing how you approach your work?

CJ: Absolutely. Ravi Vora is probably the first influential photographer that I’ve looked up to. He’s based out of LA. The reason I look up to him is that I hated the fact that people would always tell me that, “you need to specialize. That you can only shoot headshots, or you can only shoot this.” They tell you that if you want clients to take you seriously then you need to specialize. What Ravi did, though, is he managed to create a particular theme or style as his specialty. So, he could shoot automotive or portraiture or travel and every single photo would look similar and scream that it was his – regardless of the subject matter, you always knew it was a Ravi Vora. That really struck me, that someone could succeed in shooting different subject matter, by creating their consistent style. That’s what really pushes me to try to impart the same mood in all of my photos. 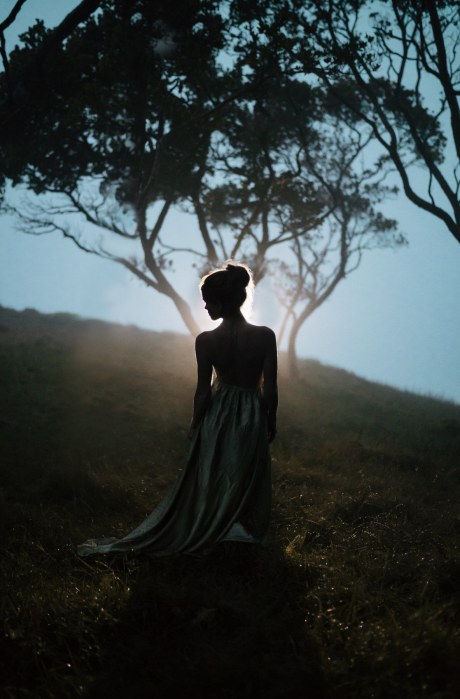 What is it about the levitation shots that connect with you? Why has that become such a specialization?

CJ: I have always been obsessed with mild surrealness, not things that are impossible, but things that are implausible, especially things like people leaning off of cliffs. It’s not so unreal that people write it off as fake, and it’s not real enough to be uninteresting. It’s kind of in that sweet spot that it becomes a conversation piece. One of my favorite photos is not even involving a huge cliff, it’s a girl on a dock over a small pond. People reached out and would say, “wow, it must have taken so much work to get the one shot and she must’ve been soaking wet afterward,” but the reality is that she was harnessed in. The narrative was so obvious to people that she fell in, that it worked; that misdirection and surrealness really played out. 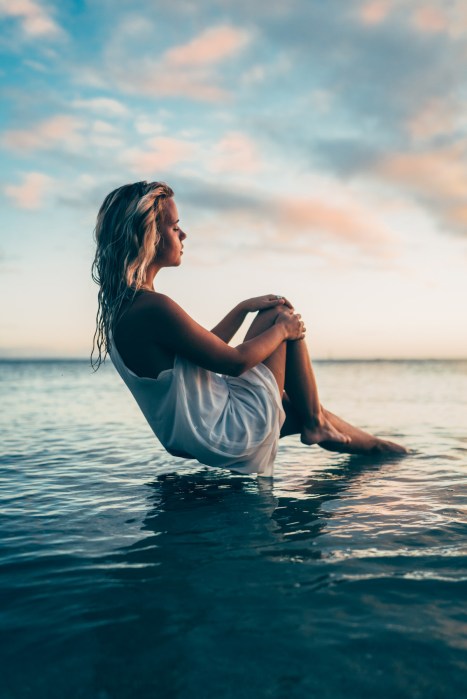 Do you have any particular habits or routines that you go to when you’re starting a new project, or when someone commissions you for work?

CJ: When I get booked, and I pretty much work entirely with private clients, (I don’t do much brand work), I always point out that this isn’t a green screen, this isn’t a studio where I am going to pose them and then superimpose a backdrop. It’s an adventure, and the photos are a part of it, but they’re a really small part of it. What they are paying for is for me to take them hiking for three days, or into the dunes, and it’s going to be arduous and tough, and that’s because these photos aren’t portraits, they are an ensemble piece. It’s a mixture of the right backdrop, the right light, the right time of year, the right outfit, and the right subject, which they are paying to be a part of it.

I think location scouting is one of the most underrated tools, even for portrait photographers, because the right backdrop and the right light not only does good things for the photo, but it inspires people while they’re there. If you’ve gone to Yosemite or Joshua Tree, you have these “holy shit” moments and something clicks in your subconscious, and your body language changes too. When people connect with nature, something happens. People act better, they act more free, they can breathe easier, they stand taller. So I think the right location is what I seek first. 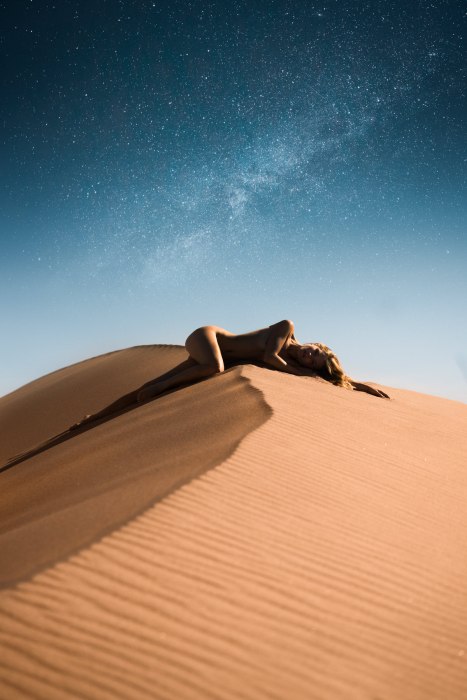 What do you do when you’re feeling stuck or like something’s just not working?

CJ: My biggest inspirational push is super simple: learn a new tool or a new technique. I think the tough part is when this becomes your full-time job you can’t afford to not do it because you don’t feel like it. My feeling schedule has been overridden by a work schedule now. I’ve found that the best way to get out of slumps is simply to learn something new, that can sometimes spark improvements. Or, do something like spend $30 and a rent a new lens for a while.

Is there a book or a blog resource(s) that you find yourself going to regularly for inspiration?

CJ: As far as websites, I have stuck with Fstoppers, SLR Lounge, Chase Jarvis blog, PHLEARN, Photoshop itself has some great stuff now on its page. Those are my standard for keeping up with photography.

Two others that have really messed with my head are The Strobist by David Hobby. He has a blog which is pretty much aimed at strobes and stuff like that, but he also has a small subsection called ecosystems, it’s kind of like a long-form essay about the place of the photographer in today’s world and marketplace. It’s really well written and easy to absorb.

And then there’s a guy who talks about color theory named Ted Gore. His landscapes are insane. Gore has a pretty long-form color theory page where he goes deep. 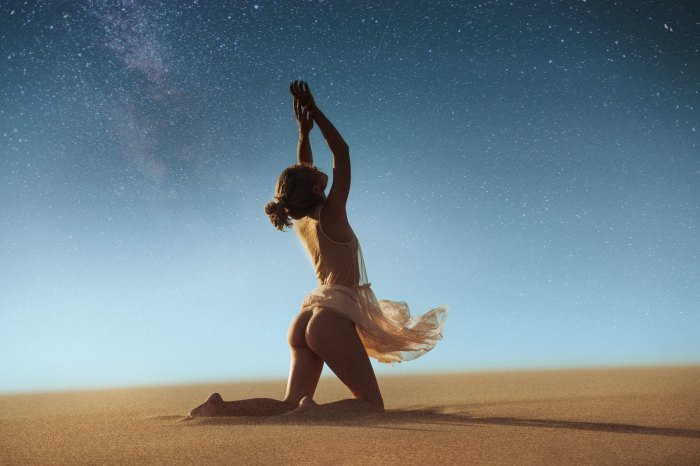 If the essence of who you feel you are were captured in a photo, what would be in that photo?

CJ: Oh, I have lots of those! So, going back to the Ravi Vora thing, I think the consistent style is the implementation of the artist themselves in the photo, regardless of the subject. I moved to Hawaii on a bout of needing to get away, and the photos which seem weightless, effortless, and free, those are the ones that speak to me the most – the ones of someone running away, a massive expanse when you have that center composed subject and that big vista. Those are the ones that hit me. Freedom can mean isolation, and center composing is a very isolating effect, but any of those photos really speak to me and/or represent me.

And do you have a favorite photo that you’ve captured? One that’s particularly meaningful to you.

CJ: It’s a picture of my girlfriend at the time, nothing crazy, she has her back to me, looking over her shoulder, city lights in the background. The reason it really means something to me is that it was the first time I was able to effectively communicate my emotions into a photo. It was a vulnerable-looking photo. I had learned to use photography as a language at that point, and I was pretty proud. I remember thinking about how I wanted the photo to look and feel, and it actually turned out how I had hoped. 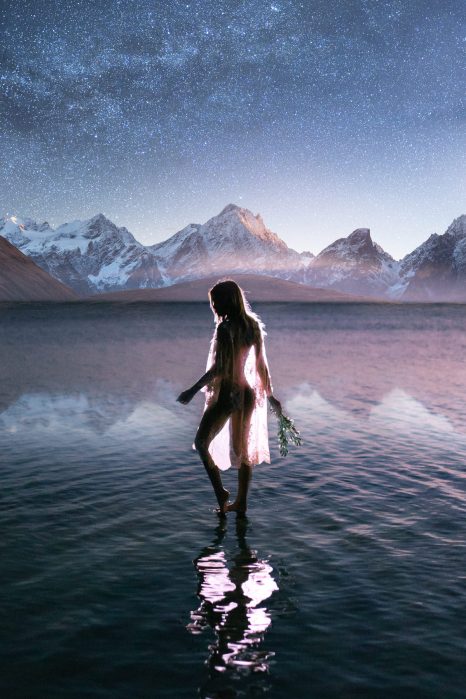 What are you focusing on right now in your work? And what’s on the horizon?

CJ: For me, it’s always a constant battle between what my clients want and what I want. On my personal schedule I am always trying to shoot things that I am not good at, that I am specifically bad at shooting or having very little knowledge in, because that will let me implement them into my client shoots. I’d really like to separate myself from what I’m known for, which is levitation stuff, and get to a point where clients will allow me to let me shoot things with them that I’m new at.

Chase Jarvis said something a while ago and it really kind of resonated with me. He said every shoot you do, every time you pick up your camera, it must benefit you in two of these three ways: the first way is monetarily – you need to be able to pay for life expenses; the second is portfolio building, and specifically he said “building,” it must improve your portfolio; and the third way involves relationship or presence building. 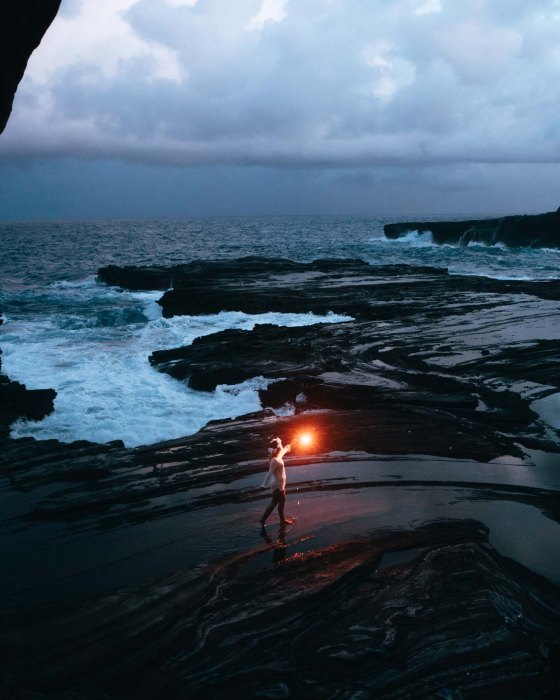 What’s the impact that you hope to make through your work?

CJ: I wasn’t born into money, and I’ve found that the individuals who inspire me the most in life are humanitarians, people who inherently do as much as they can with what they have. I want to use my art to improve the world around me.

Two months ago, during the LA fires, I worked with a friend of mine who works with a nonprofit in California to create a sale on my Instagram. I specifically said that you could only purchase by donating. It gave people an incentive to purchase knowing that the only opportunities to get these services from me were going to directly benefit those affected by the fires. We were able to raise $2200 and do two Costco runs to provide food, diapers, and basic things, like paper towels, for people affected by the fires.

I’d like to continue to find ways to use my influence and what I have to offer as an artist in order to benefit others.

You can view more of Christopher’s work at his website.