The team here at PHLEARN has been a big fan of the Sony a7R III and we love to shoot photography tutorials with it, so we are just as interested as you might be about the new Nikon Z7 and Z6 and how they stack up.

Rather than doing a traditional review, we are going to just give you the highlights and link to helpful articles from around the web if you want to take a deeper dive.

*Note: From time to time, we link to websites such as Amazon or B&H Photo and in most cases, we will be compensated as an affiliate with a commission based on any sales generated. It helps keep the lights on here at PHLEARN and pay for Aaron’s 297 haircuts he gets per year.

Skip to Reviews From Around the Web

First and foremost, let’s be clear that Nikon knows exactly what they are up against. They weren’t going to enter the high-end mirrorless race without a true contender to take on Sony A7 line.

And they have delivered. 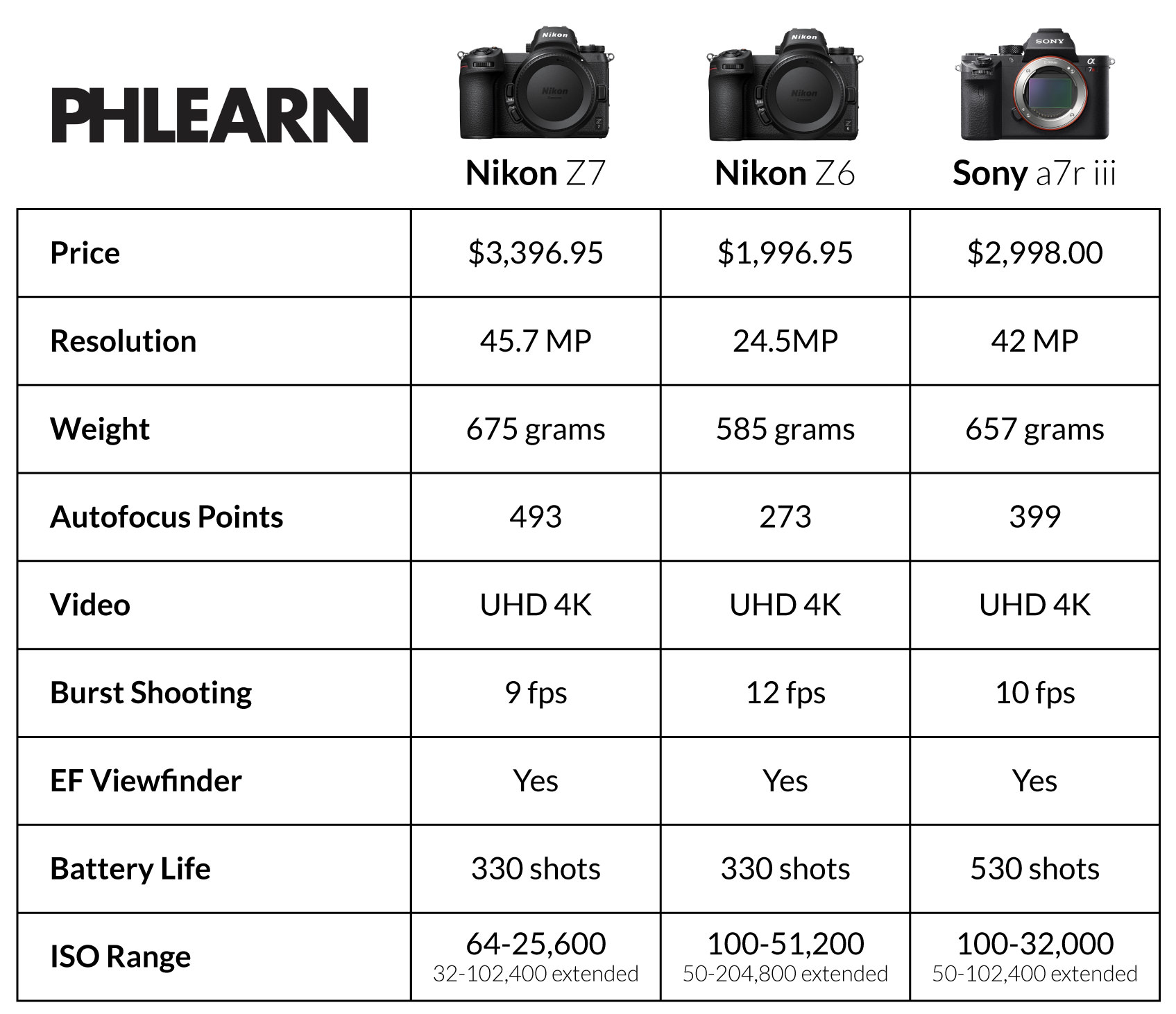 September 2018. These dates sometimes shift as well know. You can pre-order from B&H currently for an expected Sept 27th ship date.

The Nikon and Sony both use back-illuminated sensors, but the Z7 packs an amazing 45.7MP compared to the a7R III’s 42.2MP. Which if you are counting your pixels is the same as the Nikon D850.

Both cameras are heavily armored with magnesium alloy front, top, and backs with weather sealing throughout.

One key point to remember is that Sony does have the EyeAF feature, which many portrait and event photographers love for its eye detection.

Pretty much tied here. 0.5-inch electronic viewfinders all around. 3.6 million dot display with 60fps. Nearly the same magnification. Hard to spot much of a difference.

You can shoot 4K video on both the Sony and Nikon, but the Z7 does have a one new trick up its sleeve.

You might say, “well so can the Sony!“ and you’re right. But the Z7 brings a fun new feature to allow for both 4K AND 8K time-lapse movies up to 9,999 frames in total.

The Nikon Z7 & Z6 use a single XQD card slot. You might have just read that sentence and gone, “What the heck is an XQD card???” Well, it’s a ridiculously fast high-capacity storage format currently only manufactured by …..drumroll please….. Sony. (It’s a small small world right now in the high-end mirrorless space.)

For now Sony will continue to use dual SD cards for the A7 line, but we’re making a pretty strong prediction that’s going change. There are even rumors that Nikon wants to be able to support the CFExpress in the future as well.

The Nikon Z7 / Z6 share the same battery at as the Nikon D850, but a slightly newer version called the EN-EL15b. It only pulls in 330 shots, which is surprisingly well below the Sony A&R III’s 530-shot battery life. In real-world testing we wouldn’t be surprised to see the Nikon perform better than 330 shots, but that number is surprisingly low.

There will be three brand new Z NIKKOR lenses available that are built exclusively for the Z line of Nikon mirrorless cameras.

Don’t worry though! There is the Nikon FTZ Mount Adapter for all your existing F-mount lenses.

We gave you a quick overview of the new Nikon Z7 and Z6, but as you might guess there are hundreds of reviews being written as you read this. We will be constantly updating this list below with more as they come in.

Seth is the CEO of PHLEARN and an avid writer, photographer, startup investor, and business mentor in Chicago. He joined PHLEARN in 2016 and has been focused on expanding the community to reach millions of new Phans and make learning fun for the next generation of great artists.