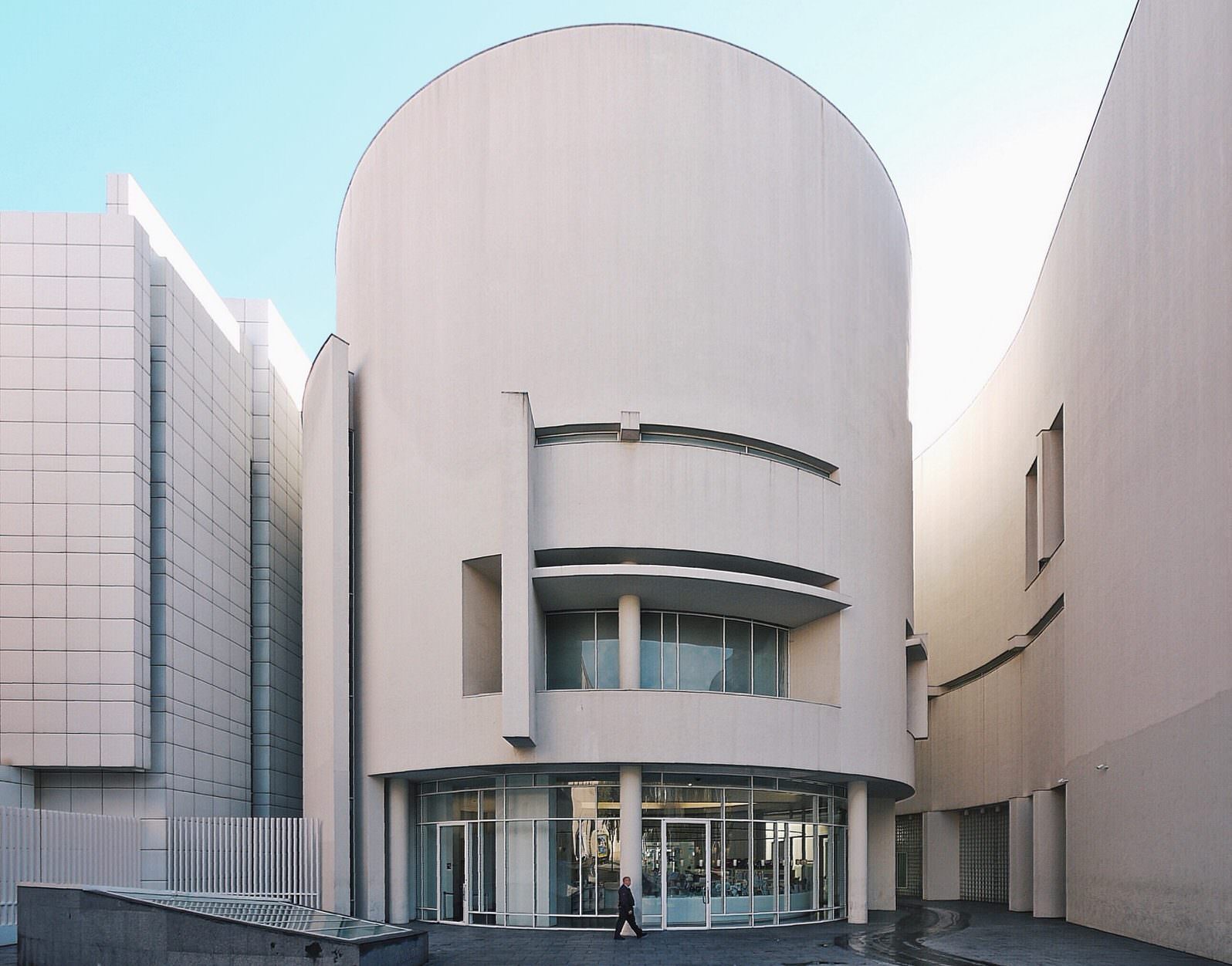 There are two things stopping Roc Isern from snapping a photo of this gorgeous Barcelona street. One is the light: the sun is streaking at an awkward angle, cutting a difficult diagonal in the city’s grungy Raval neighborhood, where colorful towels dangle alongside Catalan flags from wrought-iron balconies. And then there’s another problem, which has nothing to do with the sun: me.

“When I take photos, I like to go alone with music and isolate myself from people,” Isern says. He doesn’t typically bring journalists along for the ride.

Isern appears introverted in any language, but more so in English, limiting his vocabulary. So he speaks the way he shoots: slowly, carefully and always with a purpose.

Stocky and dressed in a casual black hoodie, his unassuming appearance belies the 147,000 followers of his personal account on Instagram, @stoptheroc — not to mention the 64,000 who follow @BarcelonaFacades, his account dedicated to the myriad architectural exteriors of his home city.

“I never studied photography. It just started as a hobby,” he explains. He started when he was much younger, and stuck mostly to travel photos – memories of his trips and interesting buildings he found along the way. He got into the Instagram game relatively early, in 2013, which he saw as an opportunity to fuel his two artistic passions, photography and architecture.

A technical architect by day, Isern found himself drawn to Barcelona’s many perfectly parallel lines, geometric shapes and swirling modernismo balconies. Since he mostly works on engineering and construction projects outside the city center, Instagram became his outlet to explore the artistic side of the industry in which he’d spent so many years.

Since his accounts took off a few years ago, he’s transitioned to a freelancer’s life, working from home and spending more time with his family, photos and Instagram, on which he spends, on average, an hour and 43 minutes every day, excluding photo editing.

“I probably earn less money now, but I’m happier,” he says with a laugh. 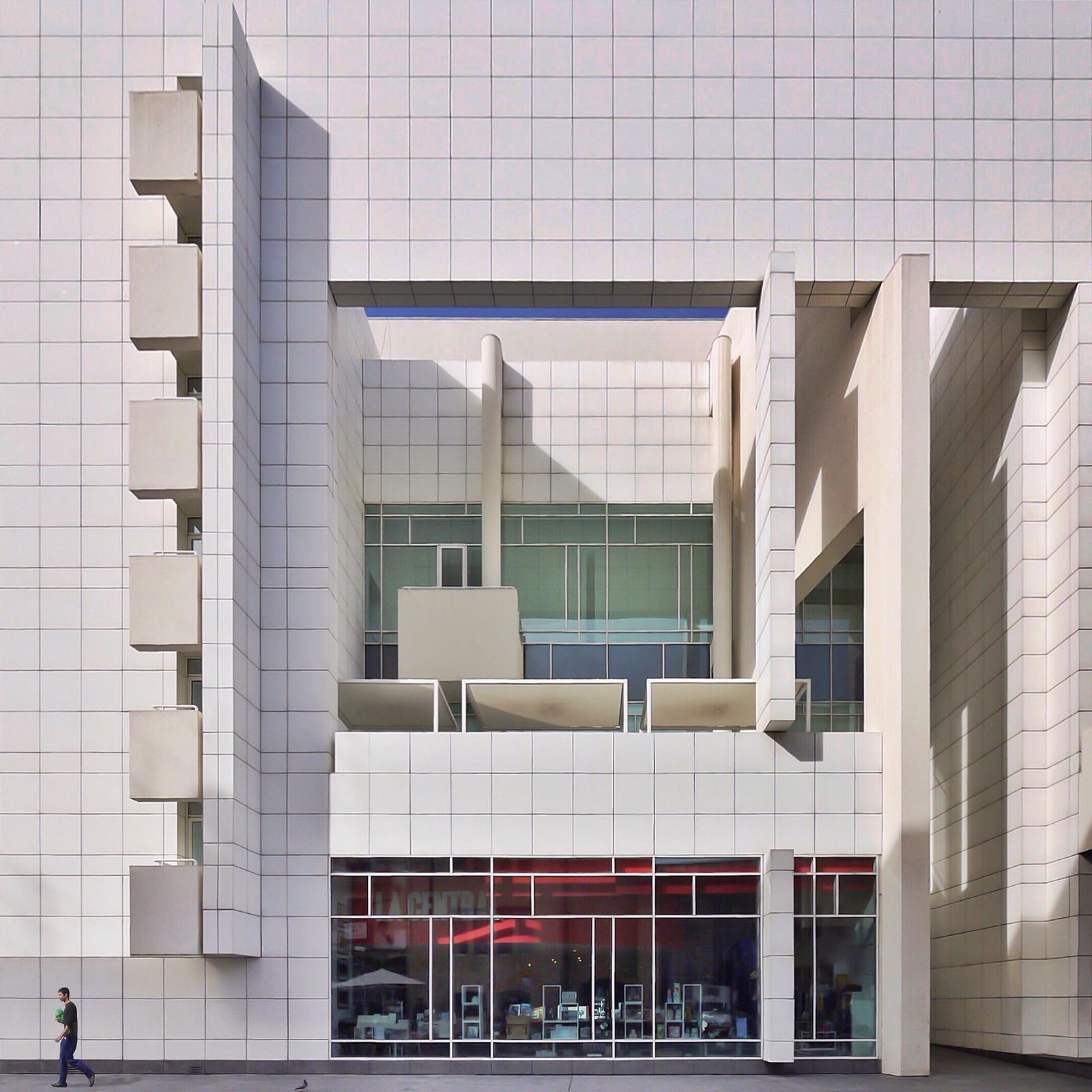 Capturing the Beauty of Geometry

I follow Isern to one of his favorite buildings in the city, the Barcelona Museum of Contemporary Art (MACBA), a recurring locale in his Instagram feed. With smooth white curves and a broad glass facade, the modernist building changes every hour as the sun shifts – that’s why he likes it so much. He could come back a dozen times a day, he says, and each time there would be new shadows, new skateboarders scraping the concrete path outside, different reflections in the glass.

We turn the corner into a quiet space behind a side door, and he points upward to a sort of rhomboid cut into the blue sky above. It’s an odd little corridor, but it’s a perfect example of what he looks for in architecture photography: different angles and perspectives of sights we might miss otherwise, even in passing by a building every day.

When Isern started his Instagram account, he experimented a lot with unnatural editing styles. You’d often see skies hued with purple gradients behind black-and-white skyscrapers. It was not great editing work, but it helped him hone his style, which, by 2014, involved more Barcelona facades than anything else. Given their consistent success on his platform, he decided to create a designated account for them, which he kickstarted that same year. (Unlike his main account, which he has started to monetize with sponsored posts, @BarcelonaFacades is strictly artistic expression.)

Soon after, Isern’s main account was promoted by Instagram itself, which skyrocketed his followers and established him as a leading architectural photographer on the platform. After branching out with @BarcelonaFacades, he reined in his own editing style, relying less on unnatural colors and more on impossible angles: almost all his photos, especially the crisp facades, are realigned in Photoshop to appear dead-on straight, as though he’s floating 10 feet in the air.

“Geometry catches people’s eyes in less than one second,” he says. “If the geometry is perfect, it makes people stop.”

In reality, Isern will spend a long time searching for the right angle, free from as many obstacles as possible, sometimes shooting multiple shots and creating composite images. After finding a view that eschews trees, cars and electrical wires – and assuming the light is right, preferably harsh to cast diagonal shadows and add depth – he’ll shoot the photo from ground level with his mirrorless Panasonic GF1 and a wide-angle lens. These days, he’ll edit the photo in Photoshop on his iPad, enhancing the contrast, straightening the lines and manipulating other objects in the frame.

The result is often a building that looks impossibly perfect, almost like a mock-up of unbuilt architecture. Real life is messier. But while his images are unnatural, because they are simply buildings that exist, they retain a hyperrealist sense of the existent. In Isern’s photos, we see architecture the way we wish it really looked – the way it almost does.

“I don’t try to document my city,” he explains. “It’s part of the game of Instagram. Everything is permitted.”

After he edits photos, he will search for the address or building name online and often write a small blurb about the building’s architect, style and aesthetic intentions. But sometimes he’ll go one step further in post-production, stitching walls or facades together into an endless corridor, meticulously adjusting the spacing and details. When he posts these hyper-realistic shots, he always adds a caveat: “Don’t try to find it,” he’ll write. “Unfortunately it doesn’t exist.” 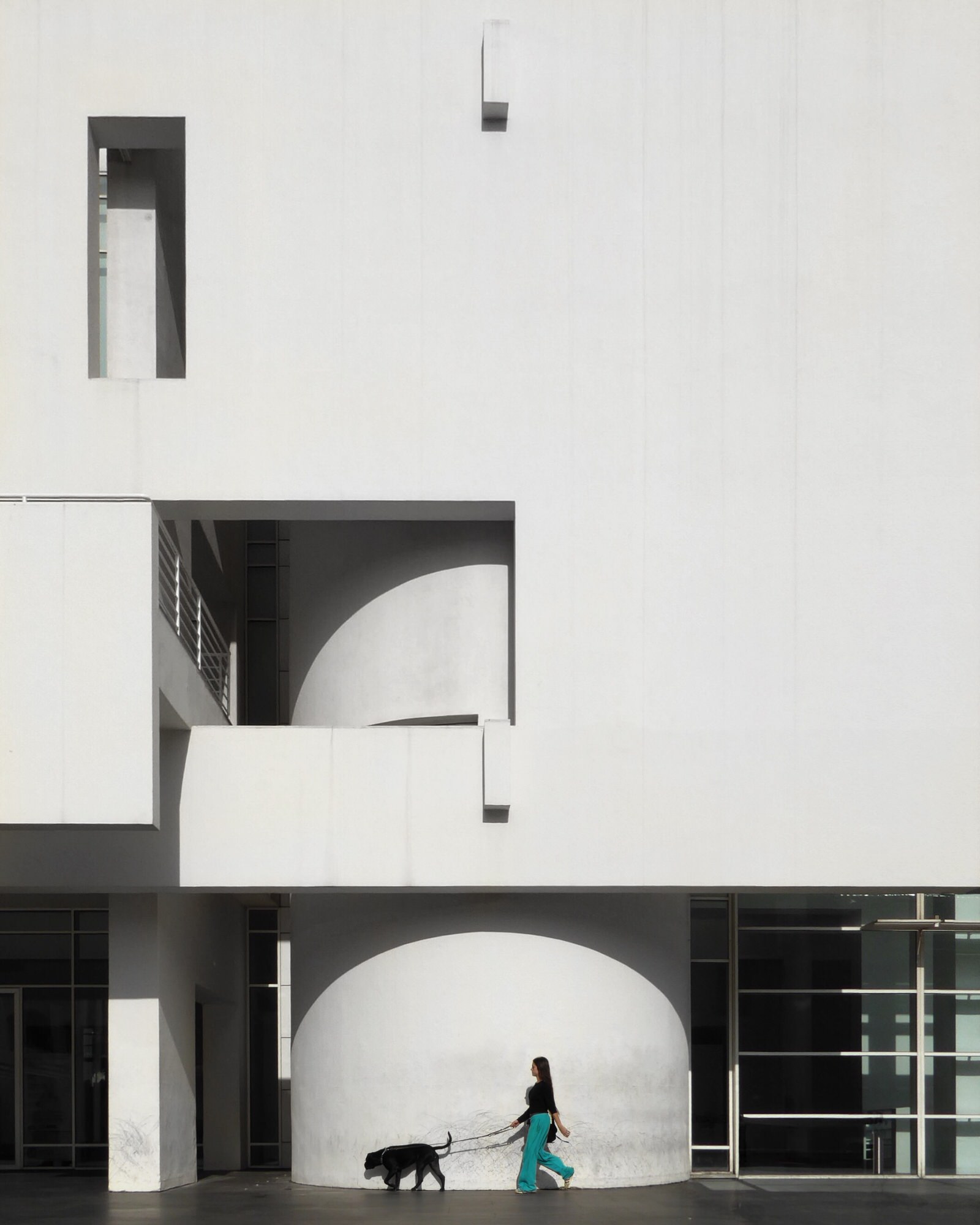 Zigzagging Barcelona’s back alleys, Isern leads me down the busy Las Ramblas and across the bustling Placa Reial, adorned by Antoni Gaudi’s famous six-headed lampposts and perennially mobbed by group tours. None of these conventional spots interest Isern as a photographer. Instead, he meanders to a totally vacant circle, maybe 30 feet wide, surrounded by curved apartments, known as the Placeta Milans, designed by architect Francesc Daniel Molina in the 19th century. Isern points up, and I see what he’s looking for: the circle leads to just two narrow alleys that shape the sky into a perfect circle, cutting one of the buildings as if it were a slice of pie. The Placeta Milans have appeared in Isern’s Instagram feed numerous times, and even though there’s construction now, he points his camera skyward and takes a shot. 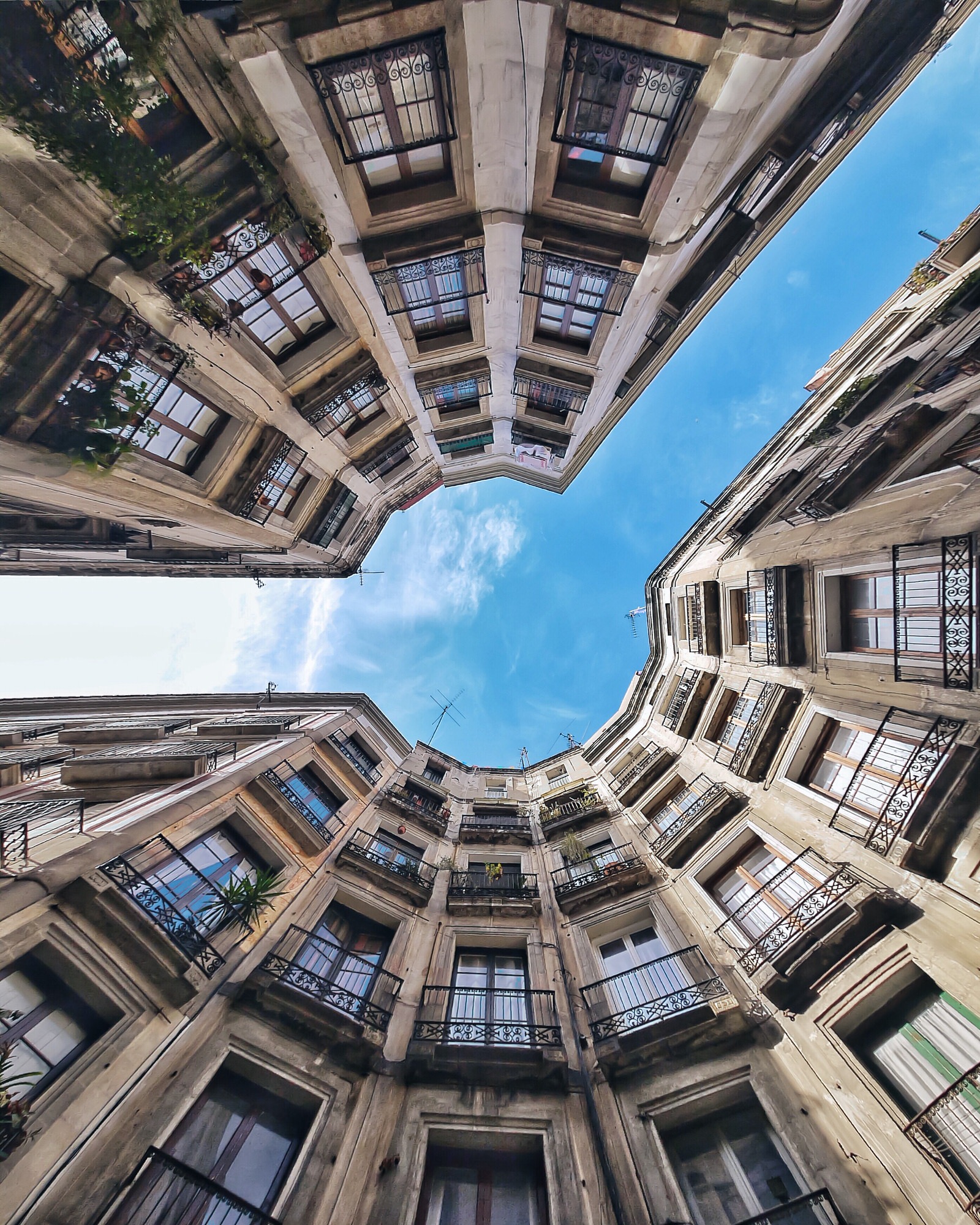 Though Isern is now working with tourism boards and companies that jet him off around the world, it’s these simple images he appreciates most. Working for tourism boards in Zurich and China, he’s more constrained over the types of shots he has to produce. He resents the term “influencer”, saying, “I like when people call me for my photography, not for my influence.”

Instead, he’s happiest just wandering his city’s centuries-old quarters, finding unusual angles and beautiful images that others don’t see. In a city defined by stunning gothic and art nouveau facades, where even bland concrete apartments jut out with surprising edges and dangling plants, you can’t help but stare ahead and get overwhelmed by its architectural beauty. Isern sees all this, sure, but when he tilts his head back, he also sees something more.