PHLEARN MagazineSelf-Portraits That Blur Reality and Fantasy with Laura Williams 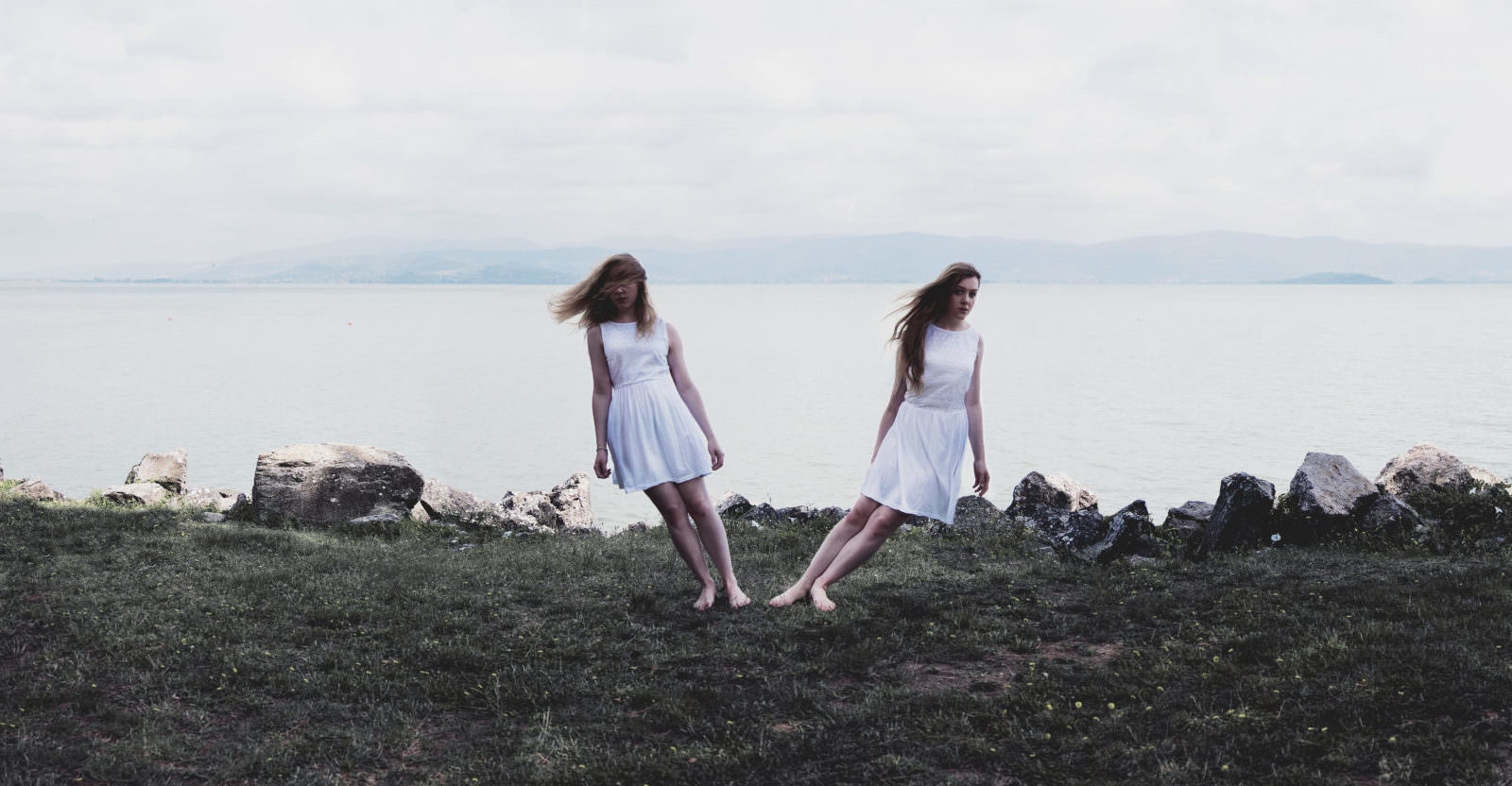 These aren’t your typical selfies. Fine art photographer Laura Williams likes to get imaginative with her self-portraits. She uses creative editing tricks to blur the lines between reality and fantasy, and each of her photos tells a unique and curious story. We recently had the chance to talk to Laura about her viral image, Invisible; the inspiration behind her surrealist photography; and her post-processing secrets. 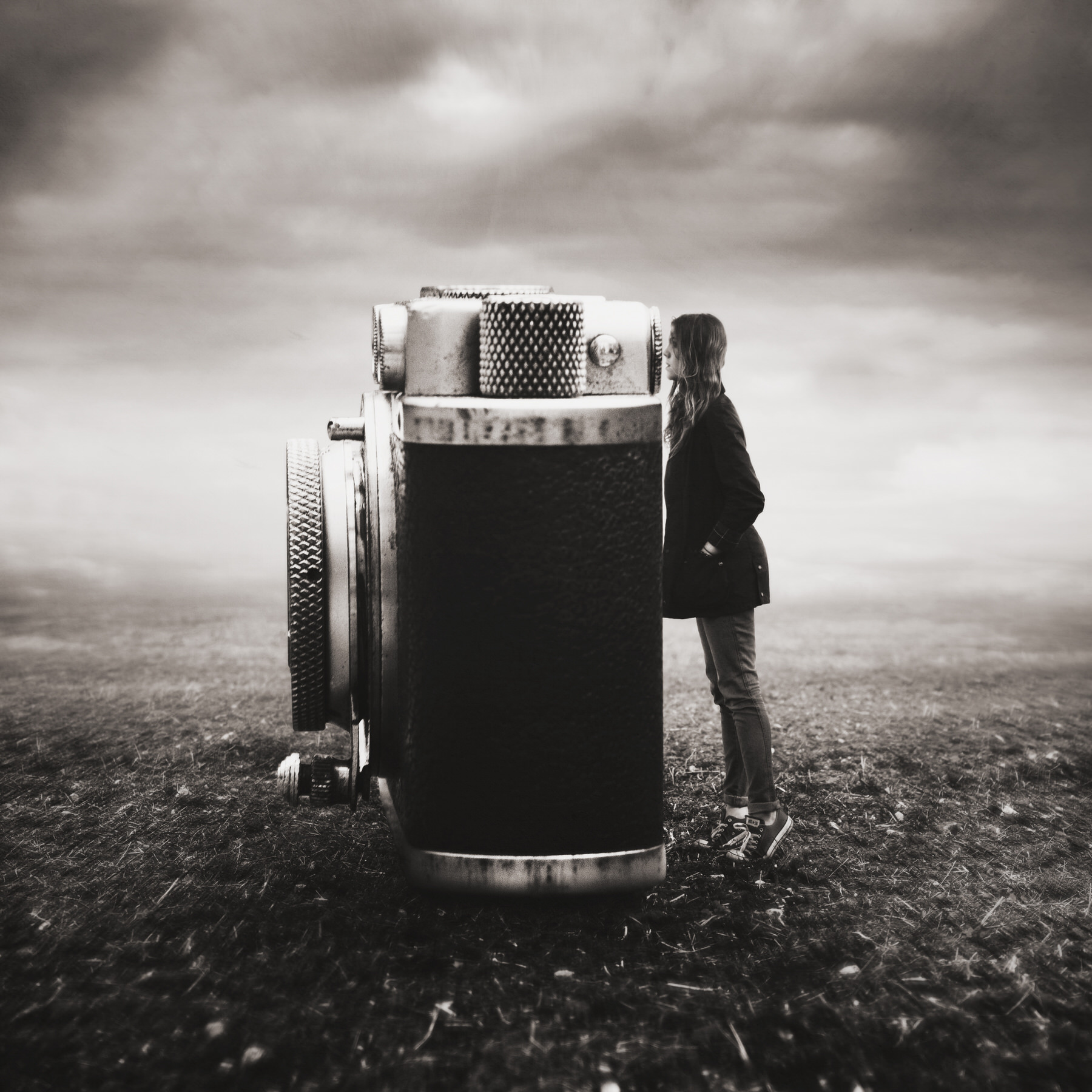 How did you get started in photography?

I’ve always been such a creative person, ever since I was a little girl. It all began with crayons, paint, pencils. I was always drawing things like most kids are, but creativity was something that kind of stuck with me. And even when I was a little kid everyone else was like, “Oh, I want to be a doctor. I want to be a policeman.” I always knew I wanted to be an artist. I didn’t know what kind of artist at that point. I imagined myself in a little studio with paint brushes and an easel, being a proper artist. Then when I was about 11 or 12, I got a camera for Christmas and it all went on from there.

When did you actually consider yourself to be a photographer then? What was the moment?

It was definitely a gradual thing. I was still using a really rubbish little compact camera, an Olympus, little zoom thing, and I was uploading my photos to DeviantArt and posting them. I was getting feedback and had a little online community on DeviantArt and Flickr, as well, but DeviantArt was the main one. I had a friend at the time and we would go out around the village and take weird photos like big giant lollipops and flowers. I think it was then that I knew I was a photographer. I was about 13. 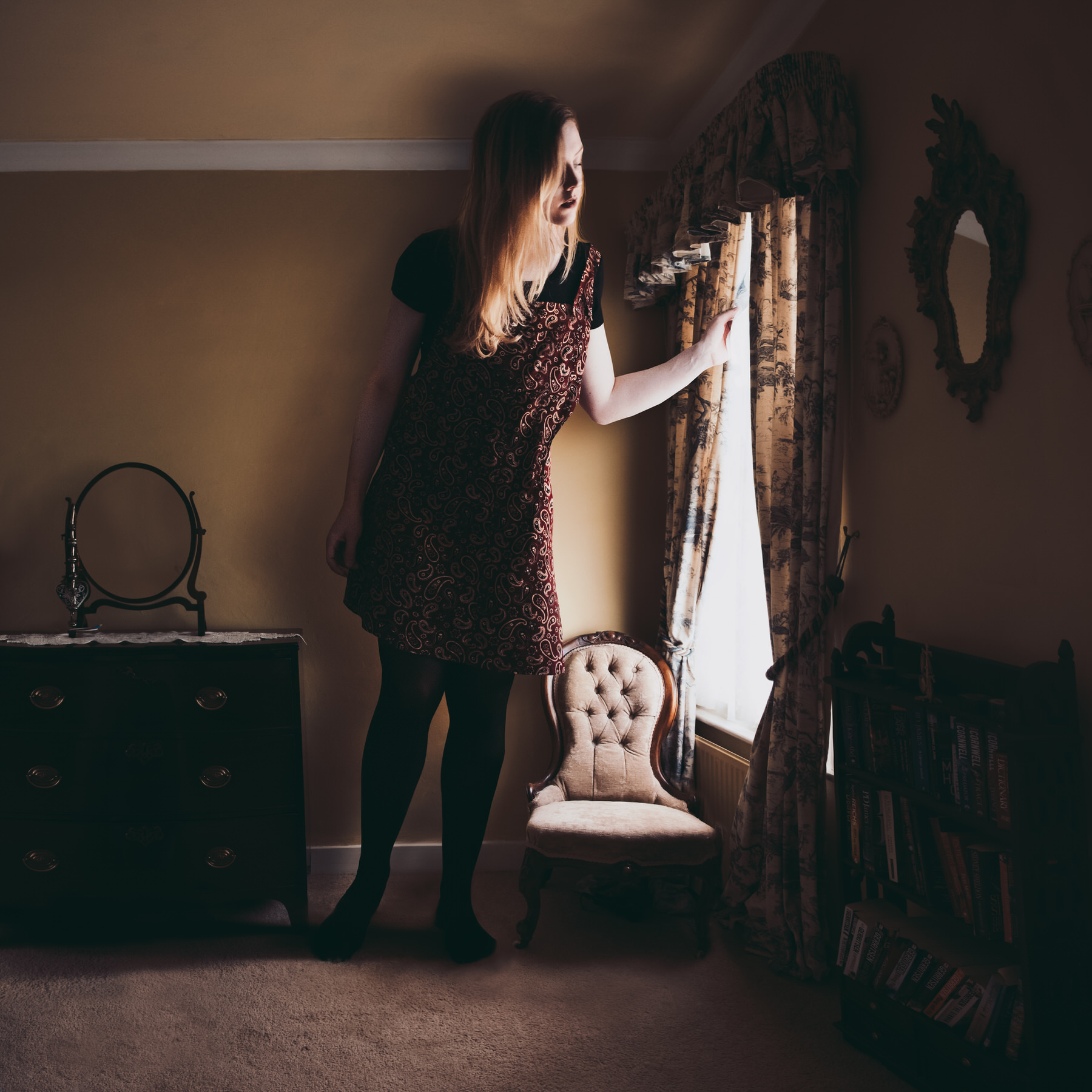 Nowadays, you do a lot of surrealist photography, how did you get into that? What was the inspiration behind it?

I’ve always been quite experimental with what I’ve been doing. I remember having a really old version of PaintShop Pro on our really old family computer, and I just remember playing around with it, experimenting and using the clone tool and putting someone’s head here and using the feather tool. I remember going overboard on that. It developed from a lot of experimenting, playing around on there and then I was like, “I want Photoshop because that’s the program that all the cool photographers use.” Then I just started refining that and using it with my own photography. It helped push ideas forward a lot more than just taking a photo. Photoshop opens up a whole new window basically, and I really liked that. That really inspired me.

Who were some of your biggest influences as far as photographers go? 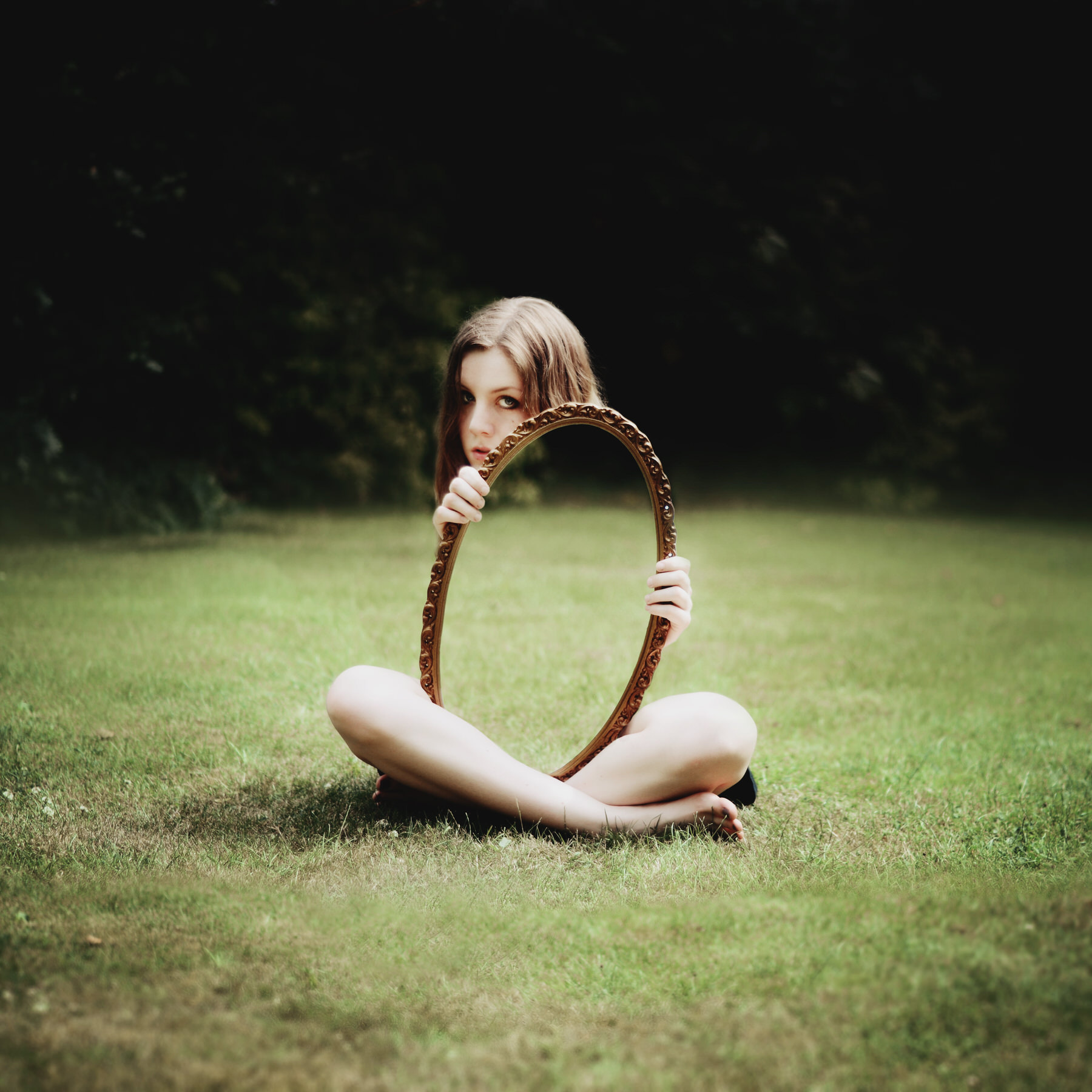 Your Invisible photo went viral a few years back, what’s the story behind that image?

What I quite liked about when I first did it was everyone was like, “Oh, is it Photoshopped? Is it not Photoshopped?” And I like that kind of excitement, that talk, that kind of intrigue; it made me feel really proud. But yeah, it is Photoshopped. It is a mirror and I used a little self-timer remote to take a photo of me sitting down holding the mirror, then I took another picture without me in it, so just the background. I masked that photo on top of the one with me in it, so that the background was in the frame and that filled in the gap and it gave the illusion that I was invisible.

I never thought that that image was ever going to go anywhere. I mean, I took the photo in early summer and then it got to September and I thought, “I’m going to have a little go at editing this one.” And then I did it and I was like, “Oh, this is all right. I’ll post that.” I remember going out and when I got back it had about 2,000 shares on Tumblr and I was like, “Oh, my God. That’s amazing!” And then I refreshed it and it had gone up to 3,000!

Are people still freaking out about the photo four or five years later?

Yeah. Often it does get circulated around again and shared. And that’s cool! 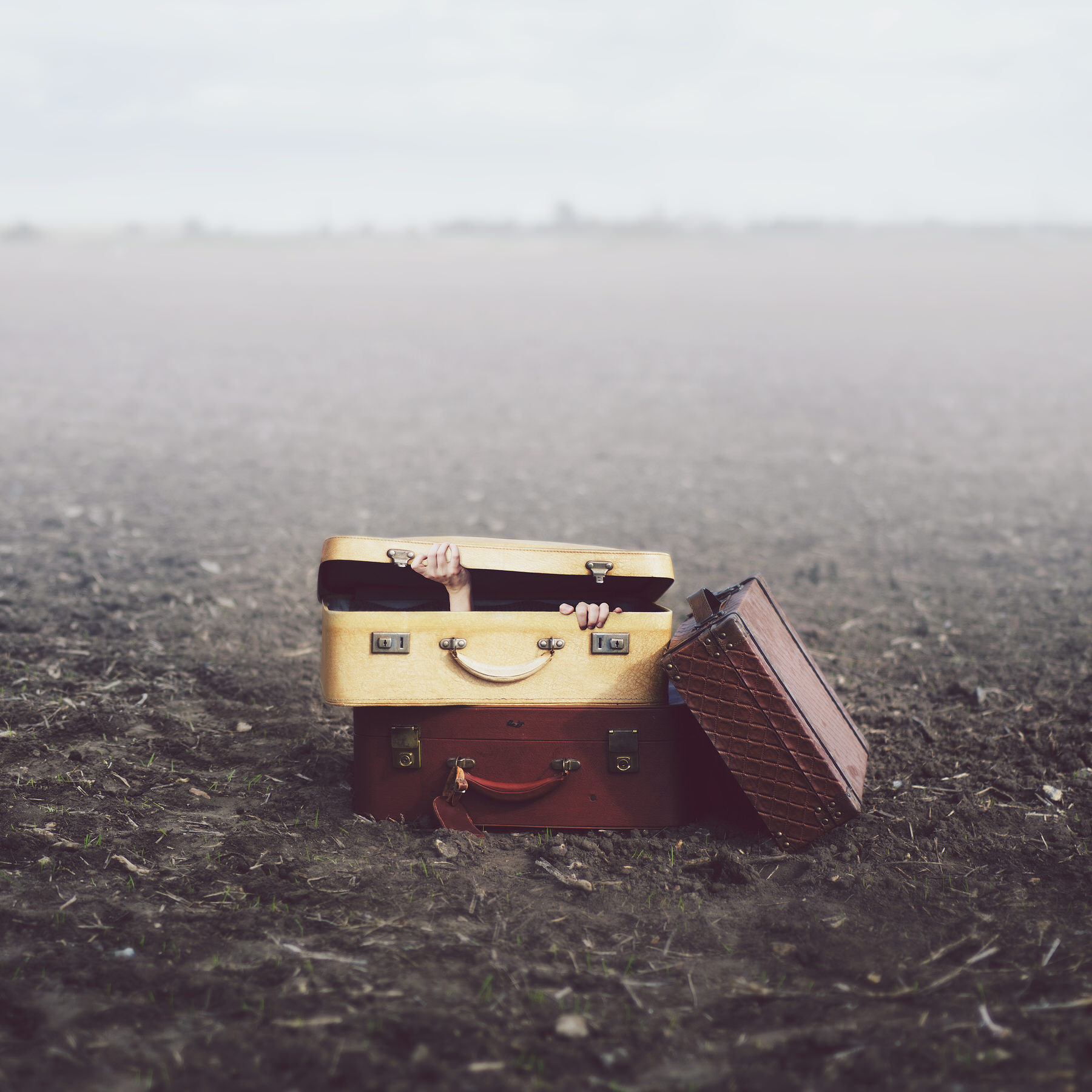 Do you have any particular habits that are a part of how you begin your creative process?

I quite like to be organized with my editing. I generally have probably about 200 layers on a lot of my photos. I like everything in groups. I like adjustment layers, masking, lots of masking on my adjustment layers. I never flatten anything either until right at the end. I’d flatten it and then I’d put that layer right at the top and not get rid of anything else. I always shoot in RAW as well, you have to shoot RAW.

Did you teach yourself Photoshop or did you take any classes?

How has PHLEARN impacted your work? How has it helped you to evolve as a photographer?

Do you typically do all the modeling yourself?

Yeah, generally. Which means a lot of running back and forth to my tripod, which is fun especially when you’re in a lake. 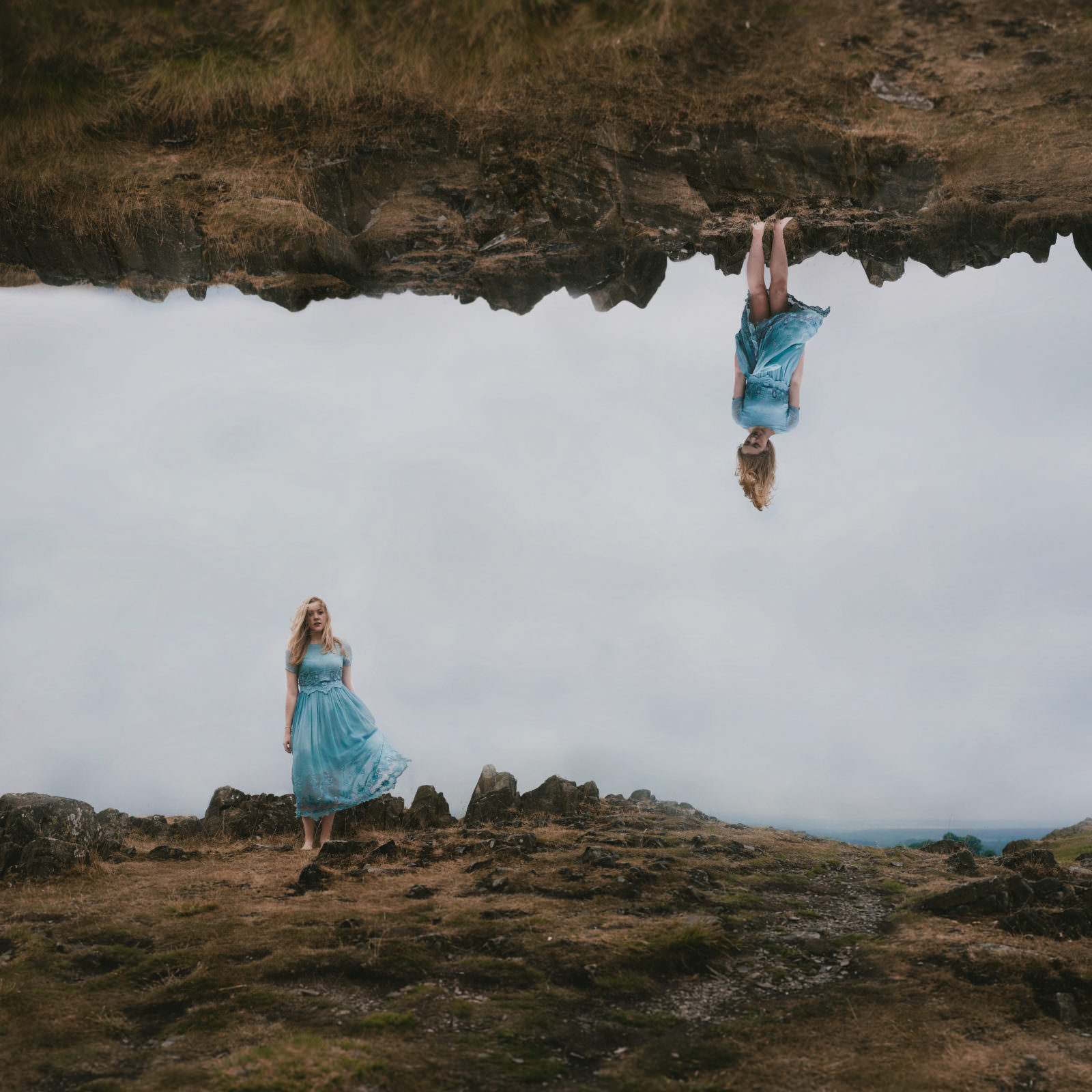 So that’s always fun. It’s natural for all artists to hit a creative block every so often, and it gives you a little bit of a chance to kind of refresh and regenerate your ideas in a sense. You can’t constantly be churning out idea after idea after idea. I don’t think you can force it. You kind of just need to let time do its thing and let the creative block happen.

I’m really inspired by nature and landscape. I don’t really like city and urban landscape; I like hills and fields and fresh air. And that sort of thing always inspires because I think, “That’s a really good location. That would be a nice photo.” No matter what kind of creative process I’m in, I always think, “That is amazing. I really like that. The sky looks really good here. The lighting is just perfect. I wanna shoot right now.”

Do you actually go out and shoot landscapes or is it more about just taking a break, stepping away from photography and getting out there for a walk?

Not even step away from it, just not stress myself out about the fact that I’m having a bit of a creative block. I’ve learned to kind of accept that and deal with it rather than stress out about it because that’s not going to help. It’s not really working right now but I’m going to move forward and try and do this and then maybe things will work. I’ve definitely learned to not stress about having a creative block; I think that’s really important because it’s natural. 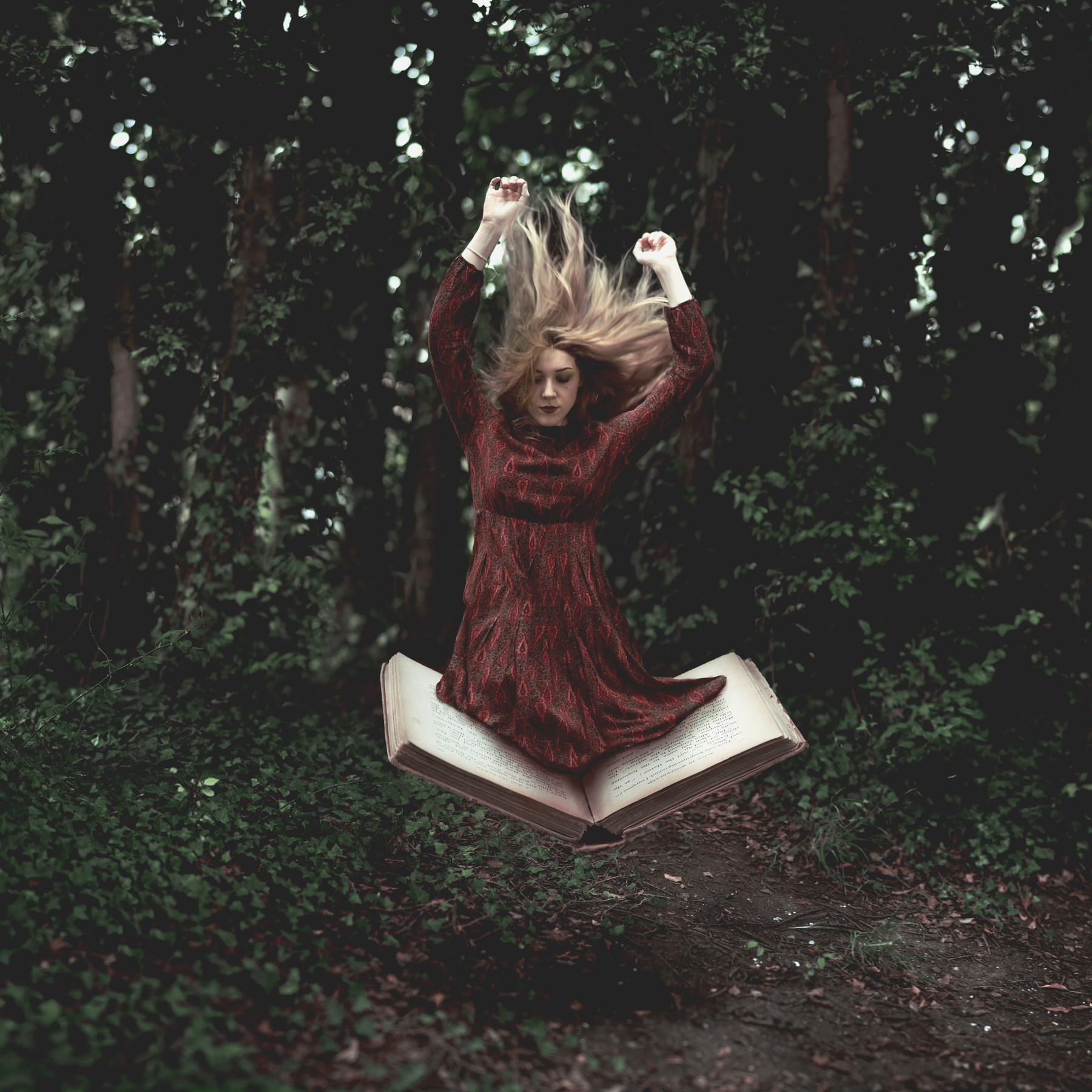 Do you have a quote that really fires you up?

Every block of stone has a statue inside it and it is the task of the sculptor to discover it.

What book would you recommend any creative person read?

“Steal Like an Artist” by Austin Kleon. It’s really good and it sort of opens your eyes and inspires you a little bit more. 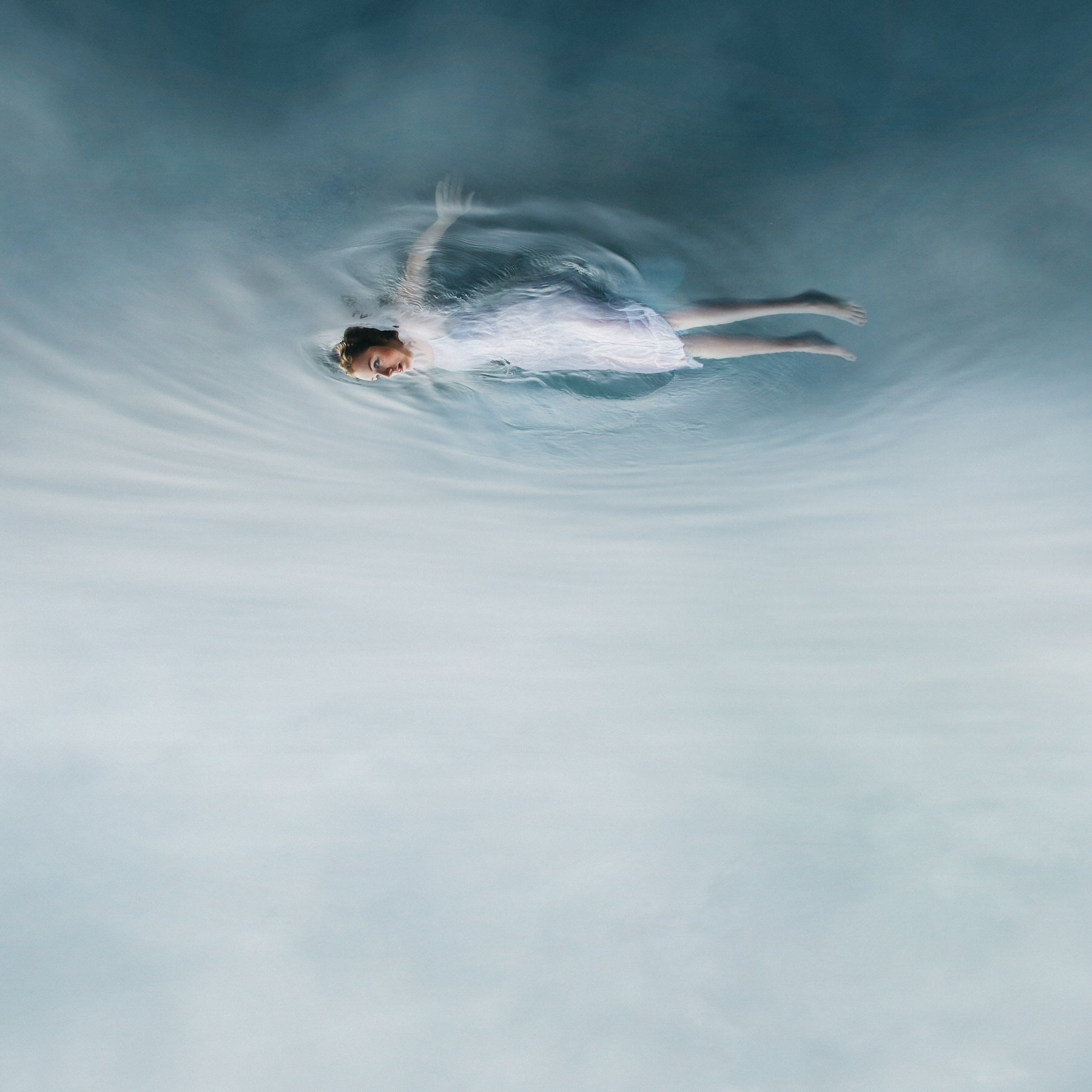 There’s the one in the water. It was 7:00 in the morning and it was a ridiculous 7 degrees outside and the water would have been even colder. It was in Bled, Slovenia. We got up really, really early and walked down to the lake. The lighting had to be very particular for this shot. I hate overhead sunlight and all the shadows. It has to be really, really cloudy and moody or first thing in the morning or last thing in the evening, and it needs to be really quiet and still with almost no rippling or splashes. So, I had to go really early in the morning. There was a “No Swimming” sign and lots of people were driving and walking past and were like, “What’s she doing?” I had my camera mounted on the tripod at the side of the water almost on the verge of falling in.

I think I had it on self-timer burst mode so it shot 10 photos at a time. And then I’d just go back and have a look at those. That was definitely a lot of trial and error. I was at Lake Bled, I didn’t have my laptop so I was just shooting loads with the intention of editing them two weeks later when I got back home. So, it wasn’t like I could say, “It’s okay if I don’t get the right shot right now, I can just shoot it later.” It all had to be right. So I basically just shot non-stop to try and get everything I needed. And that worked. I’m really proud of that one. I had a lot of fun shooting it. I remember just walking out like a drowned rat! 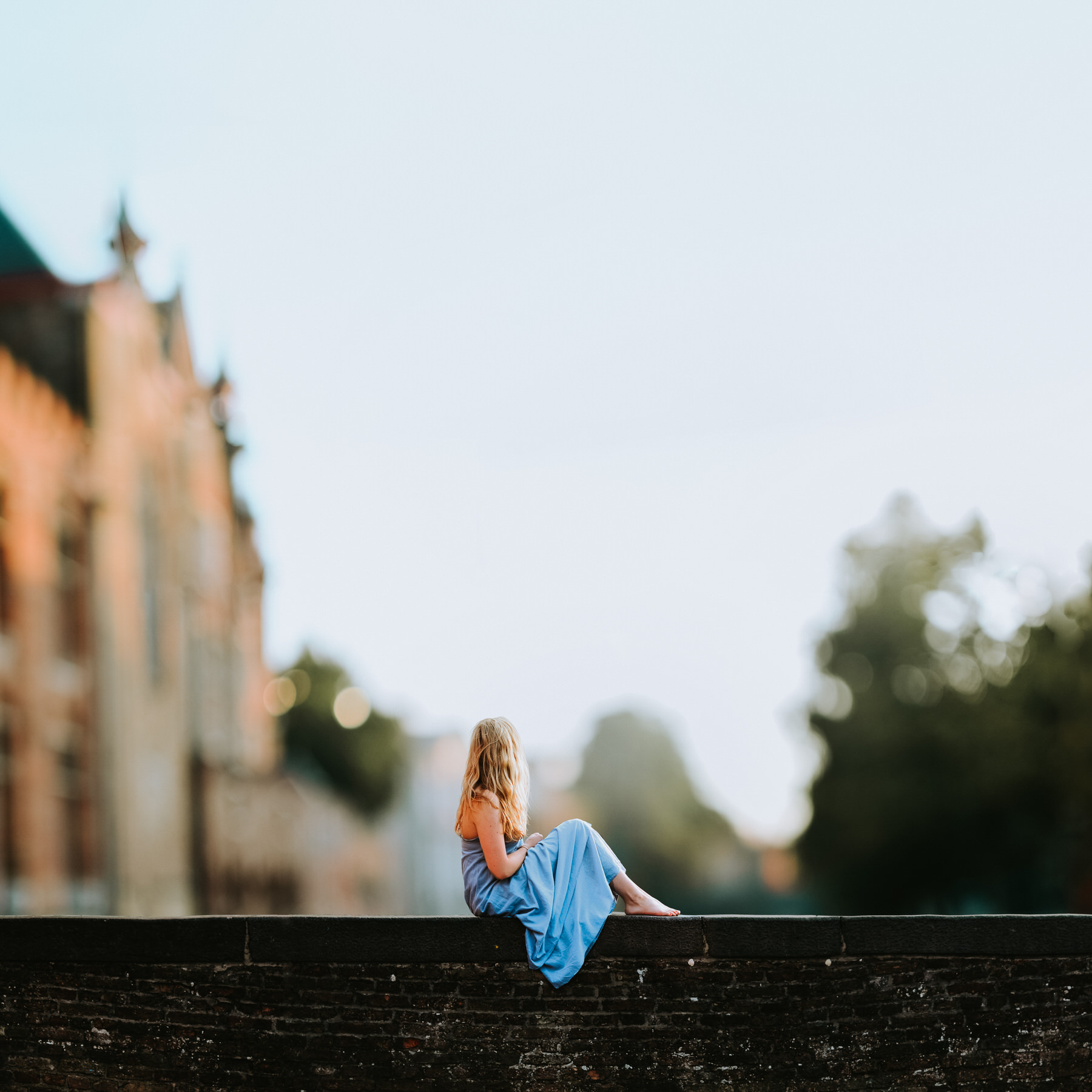 I haven’t really been doing too much as far as personal freelance portrait stuff goes at the moment. I’ve been doing wedding photography and graphic design kind of projects for clients. I definitely want to work on some more creative things soon.

Getting back to the more creative side and doing your portraits…

You can see more of Laura’s fantastic imagery and find out what she’s working on now on her website and Instagram.