PHLEARN MagazineArt We There Yet: An Artist Couple’s Epic Intercontinental Bus Trip 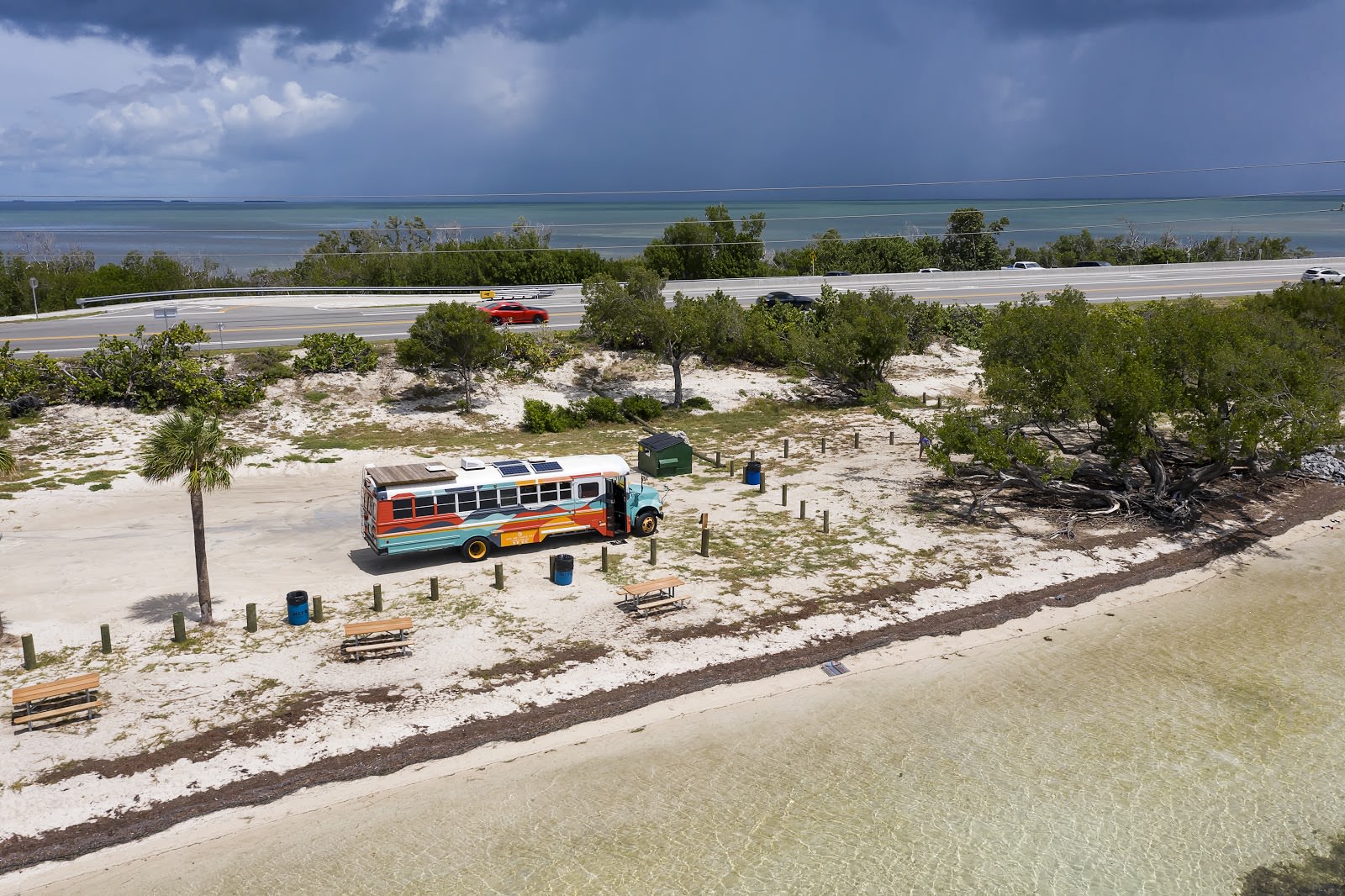 On Aug. 22, 2019, José Luis Vílchez and Cora Rose woke up in Key Largo, 15 feet from a boundless ocean. It had taken them nearly two years to get this far. Tens of thousands of dollars of credit card debt loomed over their heads. Hurricane Dorian rampaged toward them. They didn’t have jobs, let alone any income, and knew they’d have to struggle to pay for food and gas from this point on.

But on that morning—the first of their multi-year journey across the Americas, living in a retired school bus they converted into a roving artists’ studio—they were in absolute bliss.

“We just turned off the bus and looked at each other,” Rose recalls. Vílchez grabbed his drone and aimed it at the horizon; she picked up her guitar and began strumming a tune. “The process of just getting to the point of getting on the road was almost two years of work and planning and fundraising, then the bus was just non-stop. And when you’re in all of that, you’re just an administrator and a builder; you don’t have time to be doing all the stuff that you know you’re going to do. So when it got to that moment, it was like, ‘Oh my god, we’re here. We’re here, we can do it.’ It was like a bullet out of a gun. It was extremely exciting.”

That was Day 1 of the couple’s epic road trip, which is currently taking them from Florida to Alaska and back down to Argentina, entirely in their converted bus. For the next several years, Vílchez, a photographer and painter, and Rose, a singer and songwriter, are living in their colorfully painted vehicle, which they’ve equipped with a post-production photo and audio editing suite, plus a futon, kitchenette, and composting toilet. They’re connecting with schools and organizations to arrange volunteer projects along the way, and are hoping their blog, Art We There Yet?, generates enough buzz for fans to support them as patrons. Or, if they don’t want to donate regularly, fans could simply buy their music, paintings, and photos a la carte.

To make it work, the duo will have to create multi-disciplinary art, make money, and live in the tiniest of tiny-home living for the next four years. 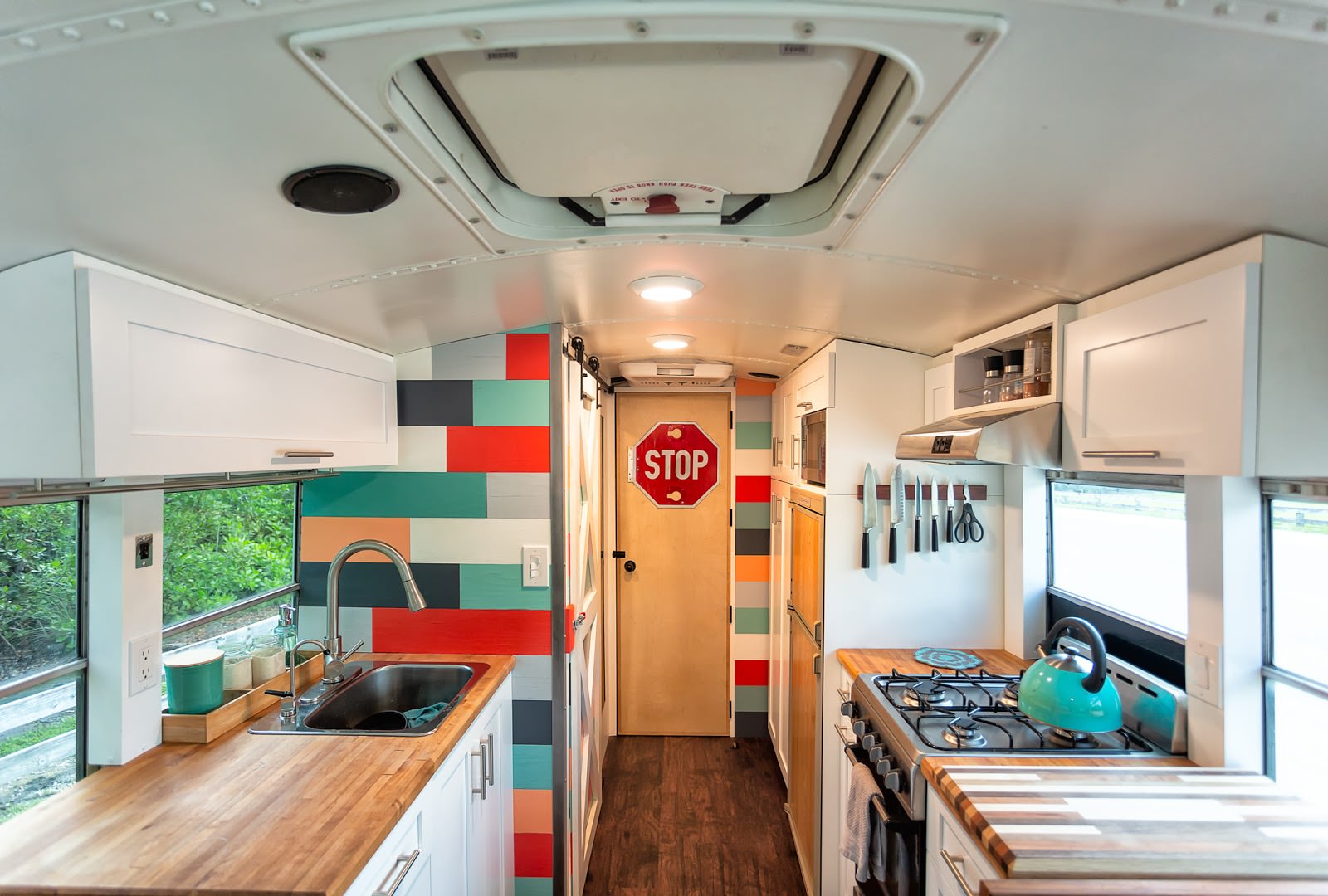 A Dream that Came True—Very Quickly

Living in a bus-cum-studio has been Vílchez’s dream for years. After the Nicaraguan-born artist spent two years travelling around the world, playing music, and living out of his backpack, he wound up at the School of the Art Institute of Chicago, studying fine arts. There, a thought grew in his mind, which he’d pitch to friends to gauge their reaction: What if he converted an old school bus to live and work out of?

“Every time I talked about it, people would get really excited about it,” he recalls. “But we never did anything with it.”

It was only after he met Rose in China that the dream seemed possible. Rose had been writing music since she was seven and performing since she was 12, but she put her professional aspirations on hold to teach English abroad. That life was a comfortable one, with a reliable salary and affordable lifestyle. But Vílchez’s idea intrigued her. 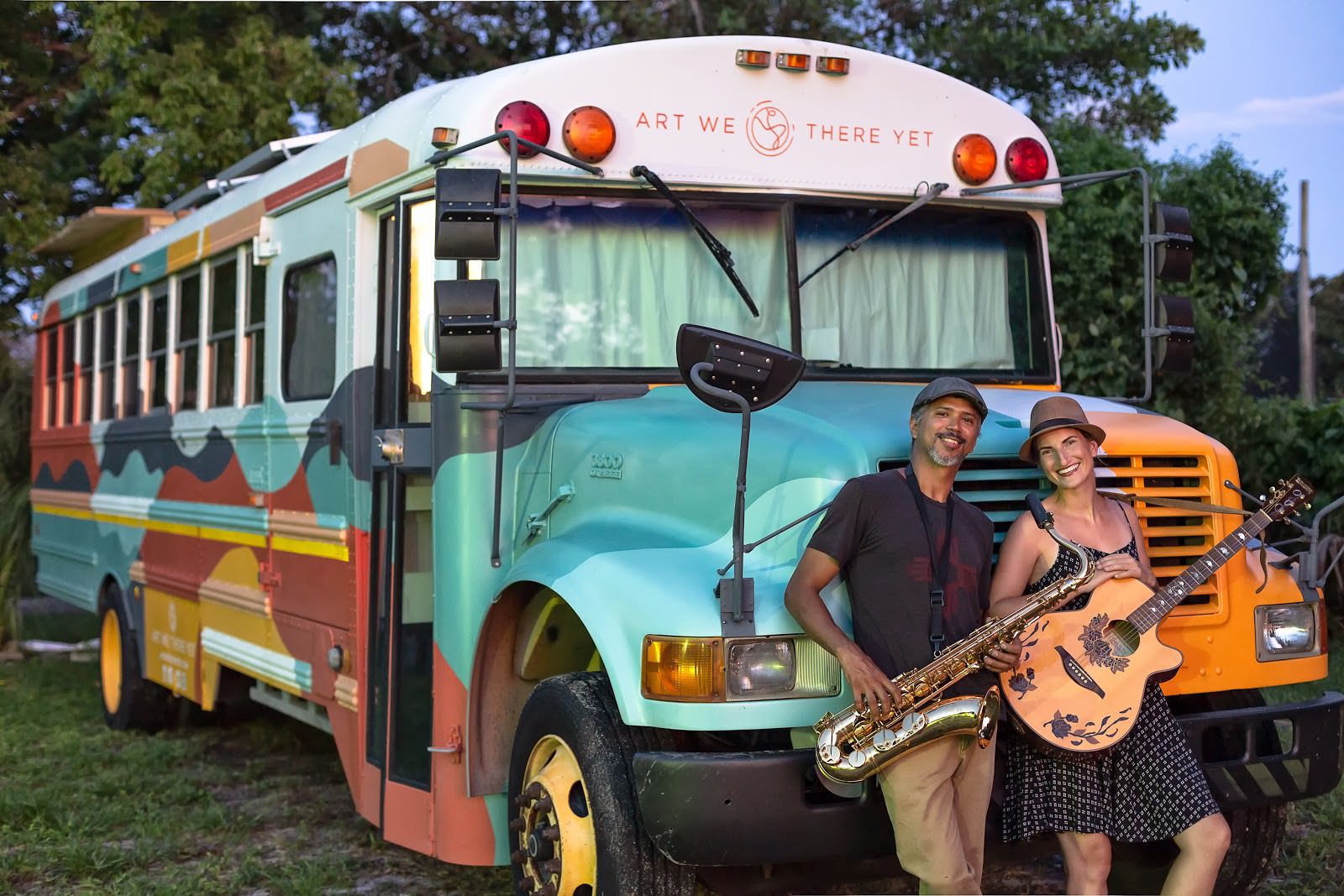 “It wasn’t like, ‘Okay, let’s go on vacation.’ It was like, ‘Okay, do I want to stop everything that I’m doing here and take on this monumental, huge task that’s going to change everything around?’” she recalls. “It’s just a huge leap of faith—with your time, with your energy, with all your money, everything.”

Ultimately, she couldn’t shake the idea of playing music full-time. “Music is my identity,” she says. “I have a lot of music stored up in hard drives, and that is wasted if I’m not pouring myself into what I’m blessed at.”

The Long Road to Hitting the Road

That decision, however, would seem simple compared to the next phase: actually finding and converting an old school bus into an artistic home.

School buses, conveniently for the couple, have to be retired after a certain amount of time on the road, due to safety regulations. After a bit of research into transmissions and engines, they decided on one from Florida, where the mostly flat terrain would ensure the shocks weren’t too badly damaged, and where Vílchez had three brothers who worked as carpenters.

The bus cost them $6,500, and they recouped about $1,000 in selling the old air conditioning unit and seats for scrap. Once the bus was gutted, they measured every inch and uploaded the dimensions to Google SketchUp, a 3D-modeling software. They gave the dimensions to Vílchez’s brothers, who helped build the cabinets. A professional electrician wired the whole place, while another friend, a metalworker, agreed to help out with other custom touches.

The couple learned the basics of every trade, doing what they could themselves, while simultaneously planning the entire trip. That meant networking with community groups in dozens of cities, creating a brand presence on social media, writing arts grants, and documenting the whole process. They crashed with one of Vílchez’s brothers until they could sleep in the bus—and even then, they relied on the brother’s house to shower until they bus had proper plumbing and a finished bathroom. 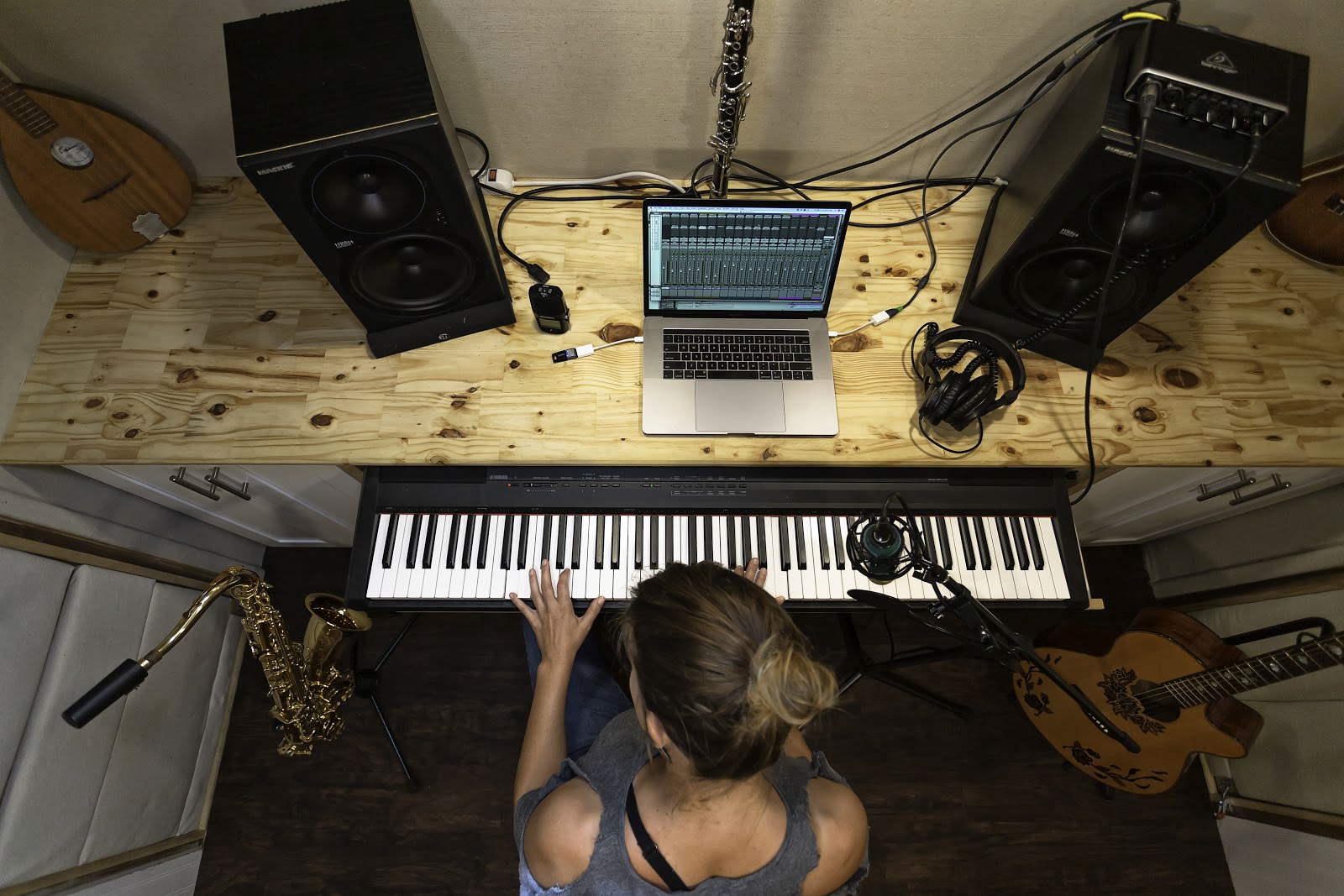 “We have gone into this with hearts and hands, head first,” Rose says. “We could have done it a different way, but to be honest, we’re artists, and it’s a give and take. This conversion is the job of 10 people. We are working 60, 80-hour weeks on the project alone. If we were to try and be doing something on the side of that, something would be sacrificed. We’re investing ourselves fully in the project.”

After two years and $28,000 in credit card debt, the couple were finally ready to take their bus on the road. Then the hurricane struck, nixing their first planned stop in Avon Park, where Vílchez had arranged a painting workshop at an elementary school. What could they do? They’d booked the next two months across the Southeastern United States, with plans to drive to North Carolina and Virginia to paint murals and play concerts. After a quick stop down to the Keys, to start as far south as they could, they doubled back northward, bidding goodbye to Florida.

While financing and creating the bus were enormous hurdles, finding projects, at least, has been easy.

“We’ve been inundated with people reaching out to us and explaining their situation or the situation of their school district, or their community art center, or what have you,” Rose says. 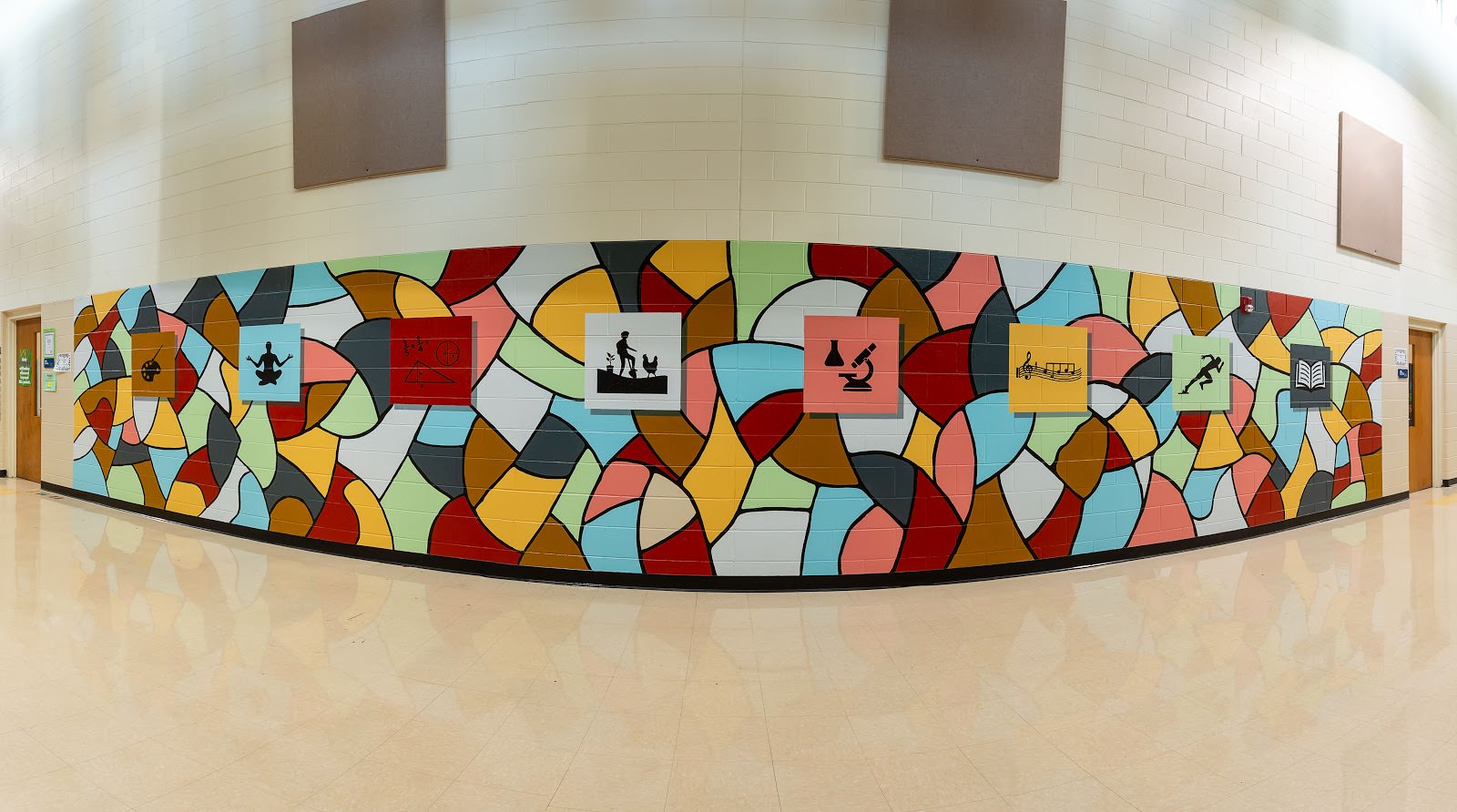 “We don’t have to go and ask people, ‘Can we come to you and do this?’ and make a proposal,” Vílchez adds. “But it’s been challenging in the sense, ‘Okay, well, do we say yes, or do we say no?’ Because it’s impossible to go everywhere people want us to come for logistic reasons.”

Everyone reaching out, of course, is a teacher or community organizer—not a donor. The couple is relying on donations to sustain their travels.

“So far we’ve been making enough money on the stops to at least fill up the diesel tank,” Vílchez says. “It takes a lot of diesel. Like, a concert we did in Tallahassee, a lot of people took a tour of the bus and they loved the idea. Most of these people are friends from college that I had there. And some of the people there have been following us online, and they just met us and they love everything we’re doing, so everyone was chipping in with $20 here, $100 here. At the end, after playing a little concert, you end up with $300, $400, and that’s enough to fill up the tank to go to the next place.”

While Rose focuses on music and Vílchez on painting, photography is also playing a critical role, both artistically and commercially. In addition to documenting their journey on YouTube and Instagram (with a planned feature-length documentary down the road, set to Rose’s music), Vílchez—armed with a Canon 5D Mark III, four lenses, a GoPro and Mavic 2 Pro—is working on a project dubbed “People of the Americas.”

As a dark-skinned Nicaraguan native, he’s experienced firsthand the misconceptions even well-meaning people have about the diversity of the Americas. While travelling across Europe, some people, hearing he was from Central America, would stare at him, confused, thinking he meant Central United States. If he said he was Latin American, many assumed he was Mexican.

In the bus, he says, their recording studio will also feature a backdrop for portraiture. “I want to show the different spectrum of ethnicities that coexist in the Americas,” he says. He’ll invite people into the bus for a photo shoot to showcase diversity within a certain region—a departure from his preferred style, which is candid street photography. He ultimately wants to publish his images in a photo book, which will include short biographies of each subject. 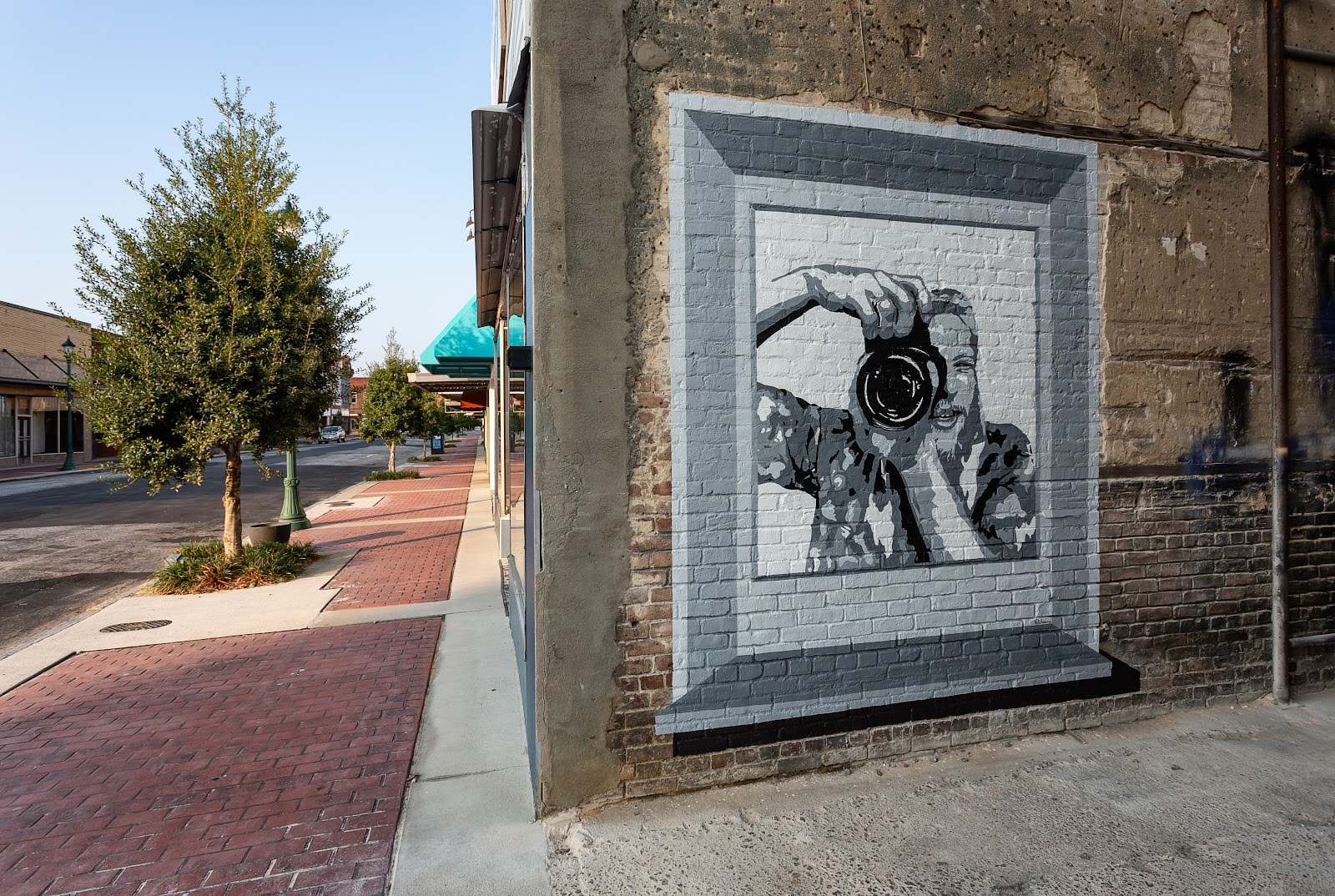 Their goal, at its core, is universal for any artist or photographer: to will themselves into success, beginning from nothing and constantly hustling. By working on multiple projects simultaneously and making dozens of contacts, Rose and Vílchez are focusing on what they love first and hoping that money will follow. So far, it’s working well enough. And with more than three years left, the open road leads to endless possibilities.