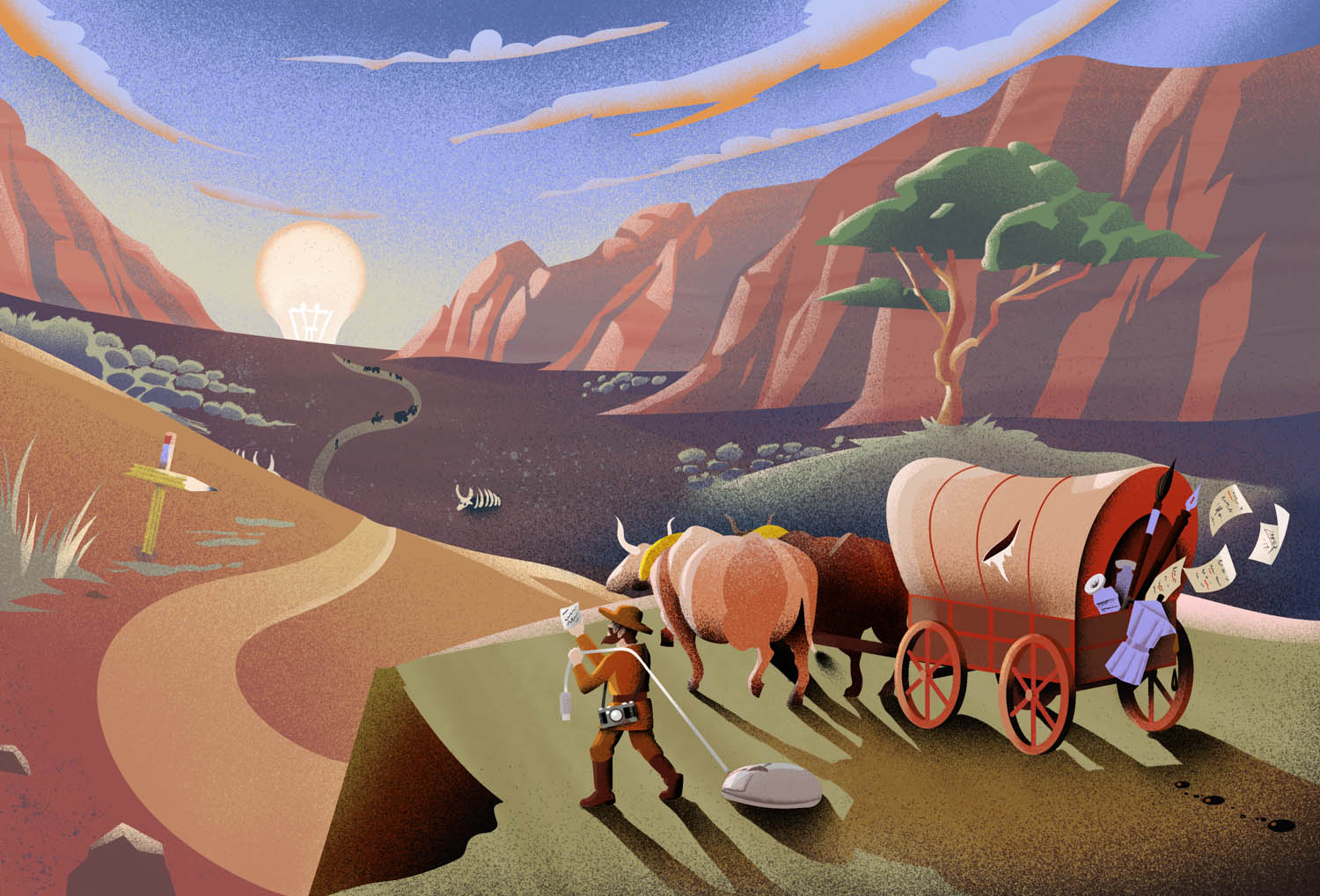 I’m in the middle of writing a screenplay.

By “in the middle” I mean I haven’t written a word of dialogue yet, but I have finished a back-of-the napkin one-page outline of the story.

Are you “in the middle” of a creative work? A photography project, a business, a blog post, a book, or client work? Here are five questions to be sure:

If you answered Yes to all five of those questions, welcome to The Long Middle: the vast expanse between the inception of an idea and shipping it out the door.

If The Long Middle was a real road, I imagine it’d look like the Oregon Trail: wild, winding, dangerous, and full of promise. I might only be a mile outside Independence, Missouri and you could be ten paces to Oregon City, but we’re both here in The Long Middle together. Our journey has begun but it’s not yet finished. Millions have been on this road before us and yet only this much is certain: there will be casualties.

Let’s make sure we and our work aren’t one of them. Here are three survival strategies for braving the road ahead.

Survival Strategy #1: Get the butterflies out

I played football in high school and before each game we’d stretch as a team and then do warm up drills by position. I played center, so I was with the linemen. Our drills were focused on blocking, tackling and footwork. But mostly they were about hitting. Our job was to hit each other. Not helmet-cracking, concussion-inducing hard––just hard enough to remind ourselves that while four hours earlier our brains were sweating over exams and girls, tonight our heads were for hitting.

The first hit was a cocktail of adrenaline, testosterone and energy all rolled into one giant life affirming smack. Mostly, we were nervous as hell.

“Get the butterflies out on the first hit!” coach would yell before a game.

Being seventeen and prepping to go head-to-head with other seventeen-year-olds who might be bigger, faster, stronger than you, under the fluorescent Friday night scrutiny of peers, teachers, families, and girlfriends––it felt like the whole world was on the line. There were always butterflies.

So we loosened up before playing the game. We hit each other before hitting the other guys. We were getting the butterflies out.

Of course creating a jaw-dropping image or writing a thrilling screenplay brings about butterflies of their own. For me, it’s the harrowing realization that I’ll sit down to work and find out: I can’t write. That everyone else will find out I can’t write. That what I do say won’t be any good. That I’ll have nothing to say. That I can’t produce an original thought to save my life. That I’ll fail and end up face down in a gutter because of the simple fact that I can’t write.

To keep these self-doubting crazies at bay, I employ a trusty set of psychological tactics to warm myself up and shake my own creative butterflies off:

What are your butterflies? And how will you shake them out? Would location scouting a few days before a big shoot help you sleep at night? Might it calm your nerves to double and triple check an equipment shot checklist before leaving the house? Does a dopamine-pumping playlist help you work magic in post production?

Do it. Do it all. Then remember: You got this. These tactics remind us that we don’t have the time nor luxury to indulge in self-doubt. Whatever your practice–do your creative calisthenics and get the butterflies out.

I know this because when I tried to type “calisthenics” above, my computer underlined it with a red squiggly line telling me it wasn’t an actual english word. I tried to change it – maybe it’s an ‘i’, not an ‘e’? But the crooked devil of shame showed up again. I had a third go at it, but again the fiery serpent of imperfection reappeared like a horror flick baddie who never seems to die.

I remember reading the first manuscript of my friend Steve’s book Tales of Iceland. It was riddled with red squiggly lines. I was floored. Steve was a published writer – a real author! I had just admitted to myself that I wanted to be a writer, and Steve was the only real author I knew. How did he miss those? Was he illiterate? Didn’t he know the difference between their and there?

Of course the abundance of red squiggly lines were only proof of how much of a professional Steve was. He was operating by the code of creators: don’t write and edit at the same time. Don’t create and critique in the same breath. Misspelling words while crafting a story should be the least of your concerns.

We have enough evil voices in our heads reminding us of our gross imperfections. Remember what Hemingway said: “The first draft of anything is shit.”

We don’t need that damn red squiggly line reminding us of it every step of the way.

Survival Strategy #3: Be a 20-Mile-Marcher

In his book Great By Choice, Jim Collins tells the story of two adventurers Roald Amundsen and Robert Falcon Scott competing to become the first people in modern history to reach the South Pole. Both men were of similar age and led teams of comparable skill and experience. Both faced similar weather and had similar equipment, luck, advantages and disadvantages. Yet while one led his team to victory; the other led his to defeat and death. Amundsen reached the pole 34 days earlier than Scott. Not only that, all of Scott’s team perished from exhaustion, frostbite, or simply froze to death.

As Collins put it: “Amundsen adhered to a regimen of consistent progress, never going too far in good weather, careful to stay far away from the red line of exhaustion that could leave his team exposed, yet pressing ahead in nasty weather to stay on pace. … In contrast, Scott would sometimes drive his team to exhaustion on good days and then sit in his tent and complain about the weather on bad days.”

In other words, Scott pushed hard on good days and sat still on bad days. Meanwhile, Amundsen chiseled away at his goal consistently each and every day.

Collins calls leaders like Amundsen who execute patiently yet diligently over time 20-Mile-Marchers.

If we’re the adventurers in The Long Middle of our own creative work (which we are), then adopting the discipline of a 20-Mile-Marchers is our daily or weekly task. It’s easy to get overwhelmed by an ambitious project (write a screenplay!) and forget that it can be broken down into manageable chunks that can be chiseled away over time.

Here are a few questions to help you break your own project down:

Adopt the discipline to chisel away patiently and diligently at your work. Be a 20-Mile-Marcher.

A final reminder: you’re not immortal.

When we diddle daddle around our work and let it string haphazardly along, we’ve likely forgotten an essential fact: we might not be around much longer to finish it.

We lose ourselves in The Long Middle when we’ve forgotten that we started in order to finish. We left Independence to reach Oregon City, not to transplant ourselves half-baked in Boise.

Don’t go to the grave with your best work left undone. Get the butterflies out. Turn off that red squiggly line. March 20 miles today, tomorrow and everyday until you hit Oregon City.

You’re not immortal. But if you finish it, your work may be.

Learn each step required to shoot and retouch 3 different styles of levitation. This is the most comprehensive levitation photography and Photoshop tutorial available anywhere.

Learn more about Matt and his work at GiveLiveExplore.com

Matthew Trinetti is a former IT consultant turned writer, TEDx speaker and education designer. He’s currently living in London building a school to help people escape unfulfilling jobs and pursue more meaningful work at Escape The City. His writing has appeared on Quartz, New York Observer, The Huffington Post and on his blog GiveLiveExplore.com.