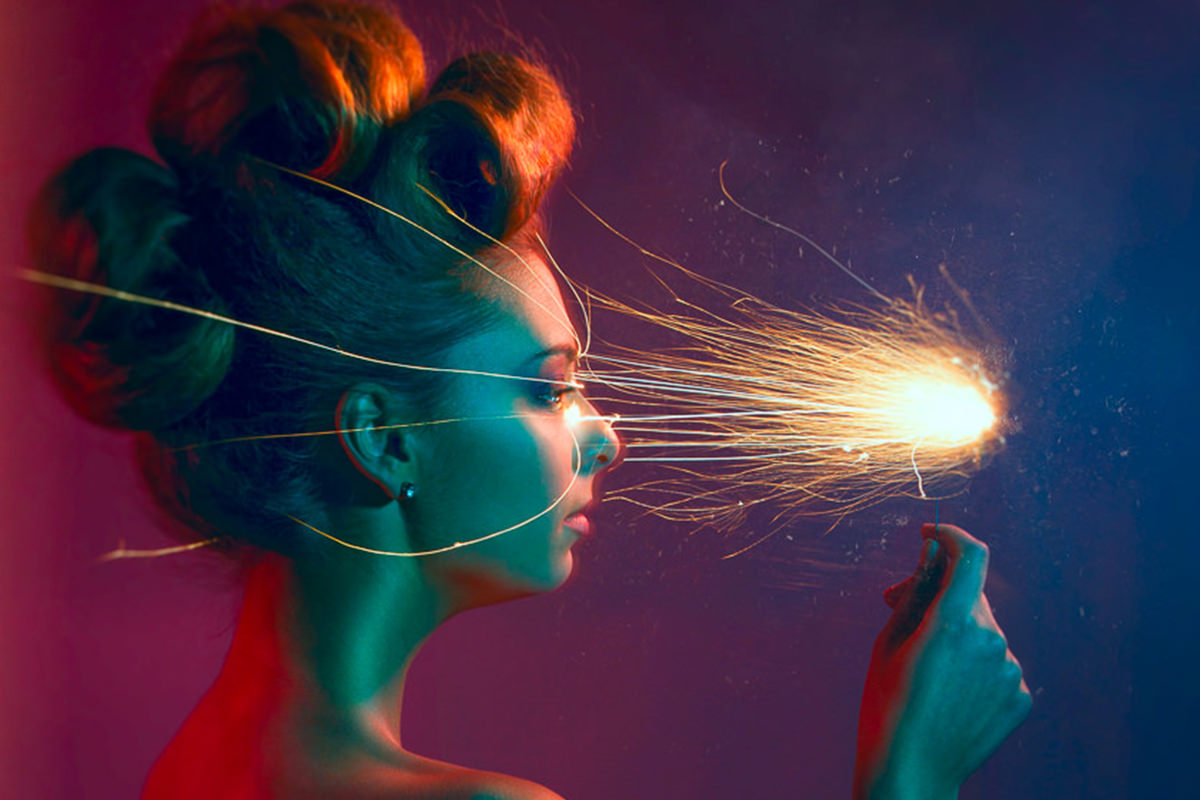 Catalog > Free Tutorials > Behind the Scenes: Light My Fire 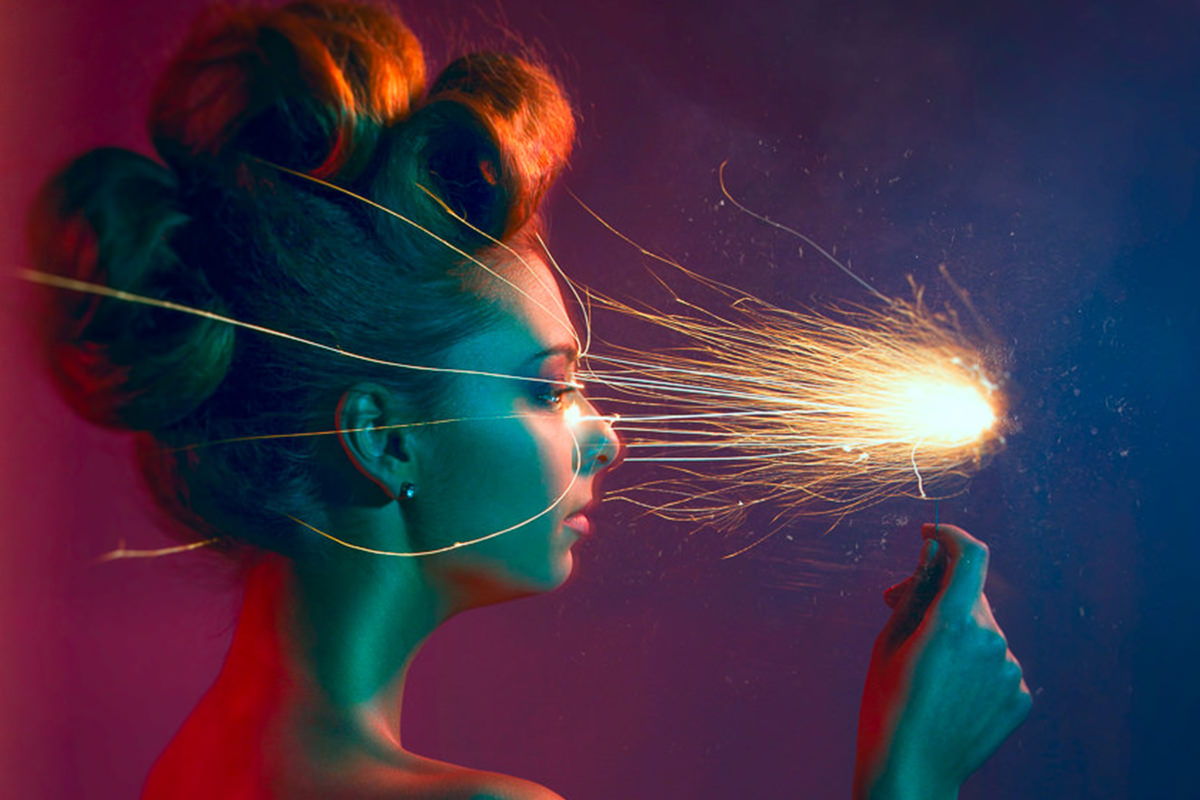 The lighting for this image is one of the more complex setups we have done for a portrait. Four lights were used to create this unique look, each with a different colored gel. When setting up lighting like this, it is best to start with one light and get it how you want then move to the next. That way you are building upon something rather than trying to do the entire look at once.

The first light is a Paul Buff Einstien shot into a stripbox and gelled red. This is off to the camera left so it hits the back of the subject as well as the background. The next light is an Einstien into a medium sized soft box camera right gelled blue. These two lights combine on the background to create purple in the center of the image.

The third light is an Einstien with a 22″ beauty dish and a 40 degree grid gelled CTO. This warm light coming from behind the model gives her a bit of rim, and also imitates the Light coming from the sparkler. The last Light is an Einstien fixed with a 7″ reflector and a 40 degree grid gelled cyan. The light is boomed out over the subject and aimed at her face. The grid allows the light to have a very tight falloff, and the cyan color balances out the orange from the beauty dish.

When creating an interesting portrait it helps to have a few different elements in place. One of the best things you can add to a portrait is a prop. Props help to add interest to an image as well as give something for the subject to interact with. Check out the work of photographer Peter Yang to see some brilliant use of props.

For this portrait we toyed with the idea of using several different props including flowers and black fabric. Each of which would have produced a completely different look. We decided it would be fun to use a sparkler, but at the time had no idea that the sparks would wind up hitting our model. We started out trying to get the sparks to not hit anyone. After we captured an image where one of the sparks hit the model’s face we knew that was the right direction for the photo shoot.

At this point you are faced with an interesting challenge. Trying to convince another person to put a sparler inches from their Face while having a wind machine blow as many sparks into their face as possible. I wouldn’t expect everyone to agree, but there are some things that you can do to help people push their boundaries a little. First I held the sparkler to my own Face as a test to see if the sparks did in fact hurt. If they had, there would be no way that I would have asked someone else to do the same. It turns out that they didn’t hurt, and that helped bring the idea forward. Another thing that helps people to feel comfortable is to show them the photos as you are shooting. If they can see that their efforts are paying off, they may be more inclined to move forward.

Now just because we used sparklers in this photo and they happened to not hurt I am not telling you to do the same. Sparklers are dangerous and I don’t suggest putting them anywhere near your face. You could have a different brand that may react completely differently.

This final image is a combination of several different photos. All the effects are real and have not been exaggerated in Photoshop. 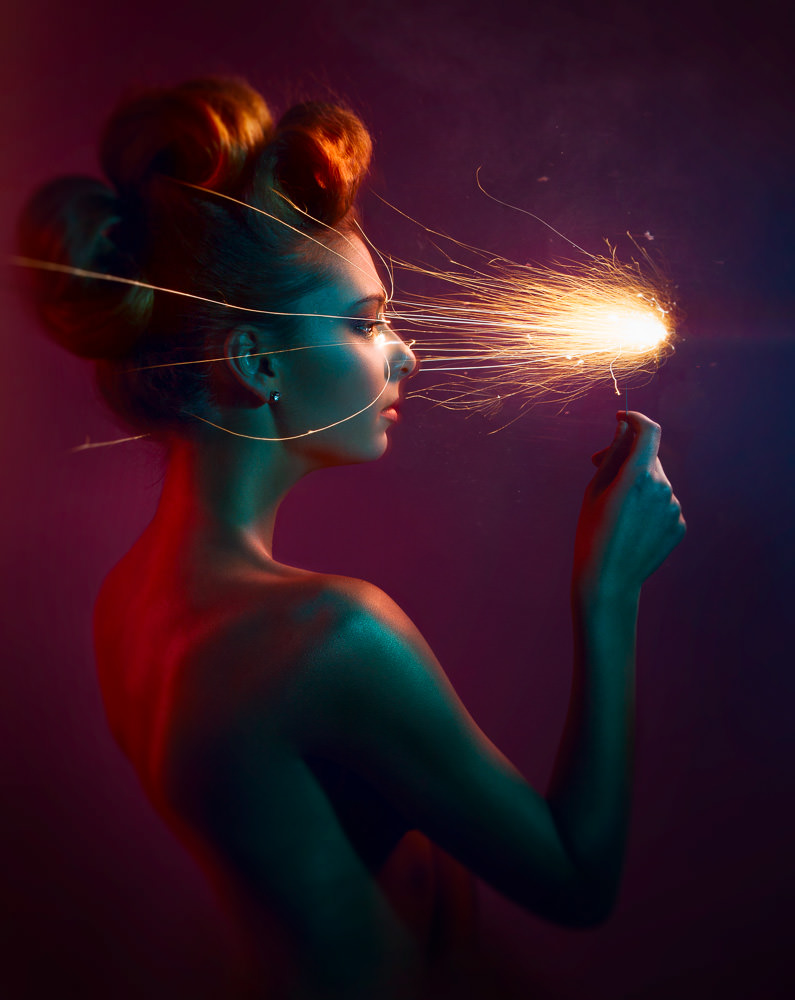