PHLEARN Magazine10 Photos That Changed the Course of History 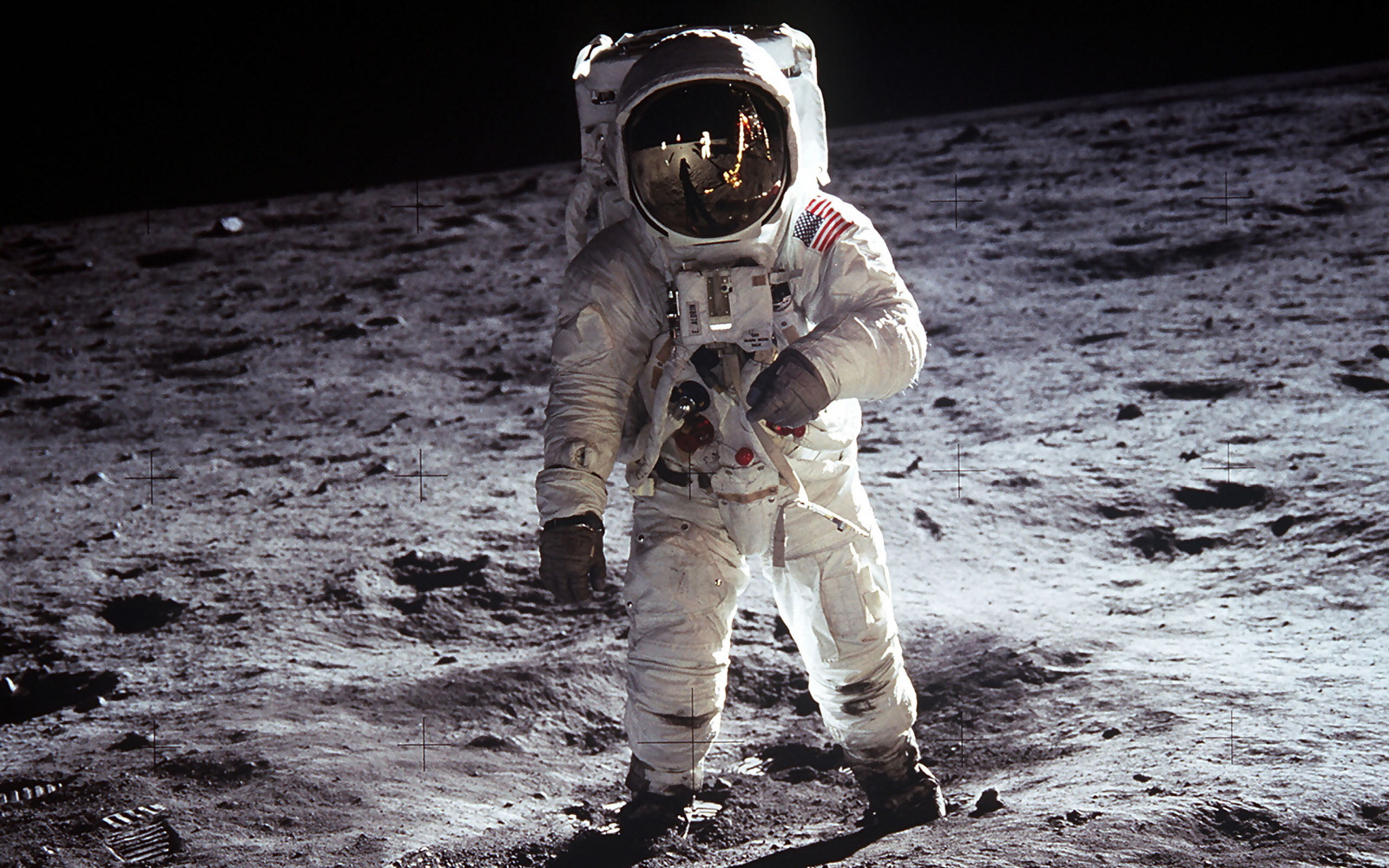 History and photography have always been fickle bedfellows, and predicting what photos will ingrain themselves into the rich tapestry of world history can be tough. Some photos are conceived with long-lasting recognition in mind, while others find themselves slowly climbing to the top as historical values are analyzed and modern attitudes change.

The following photographs are examples of the power behind the moment; how people, places, and experiences have come to shape the course of history with powerful messages and earth-shattering imagery. At the climax of their fame, these photos awed, inspired, and motivated people of all backgrounds, and documented some of the most powerful moments in history to date. 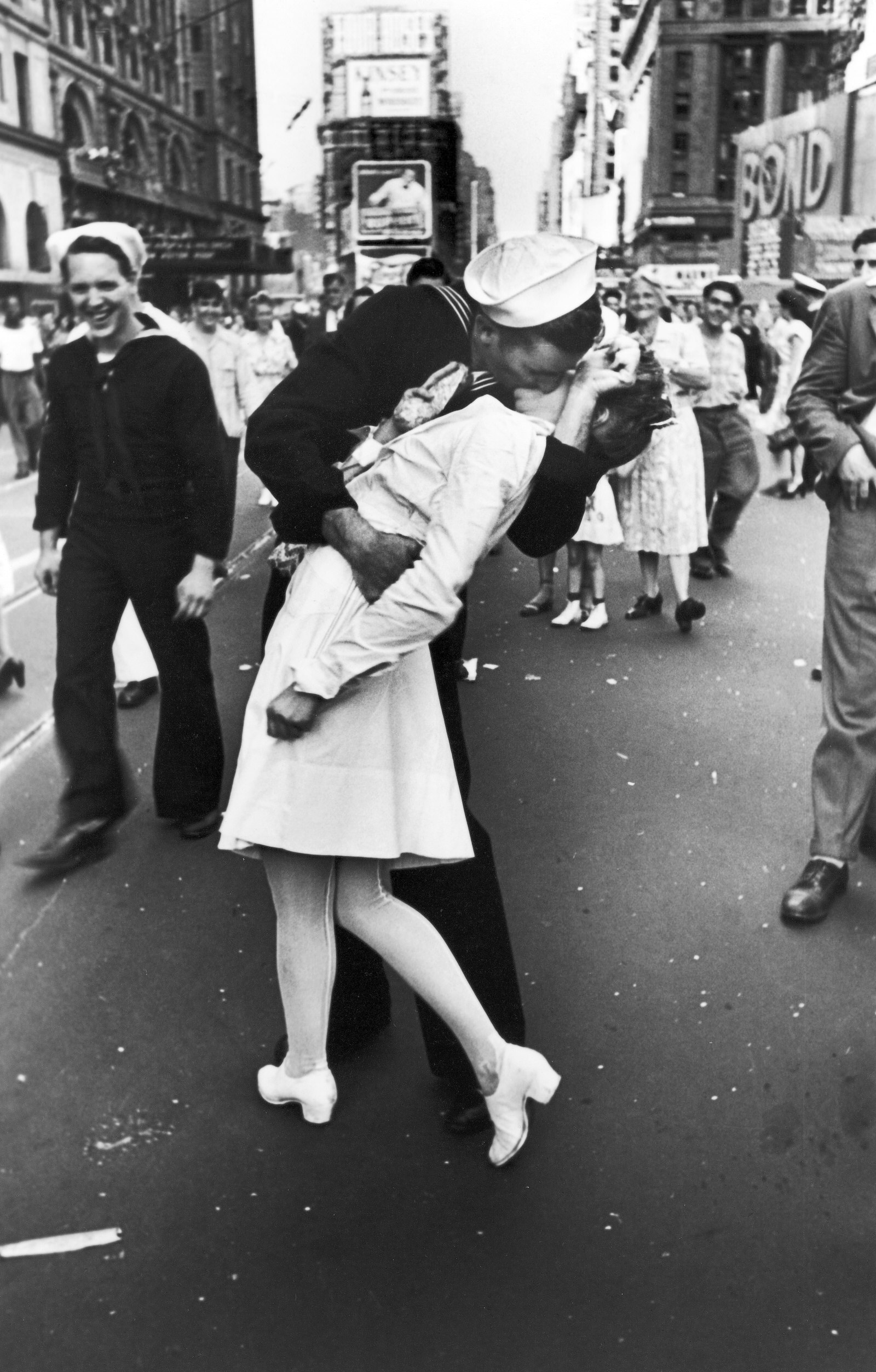 Taken by Alfred Eisenstaedt in New York on August 14, 1945, The Kiss (otherwise knowns as V-J Day in Times Square) captures the iconic moment a U.S. Navy sailor kissed a stranger on the streets of Times Square. Popularized by its publication in Life magazine, the photograph is a great example of the power of street photography in action.

Eisenstaedt had been present at Time Square for what is colloquially known as “Victory over Japan Day,” the day on which World War II ended with Imperial Japan’s surrender. The closing of the war incited nationwide celebrations, including a frenzy of festivities in Times Square where Eisenstaedt spotted the sailor kissing a stranger – a nurse, identified by her stark white uniform.

There’s a lot going in the photo that contributes to its iconic reputation. It feels both candid and posed – the shape and contours of the kissing couple feels proactive, alive, and passionate. The surrounding onlookers, giggling and ogling at the couple, frame them perfectly, and add a candid element to the photo. The photo feels like a symbol of celebration and has had a lasting cultural impact on American history. 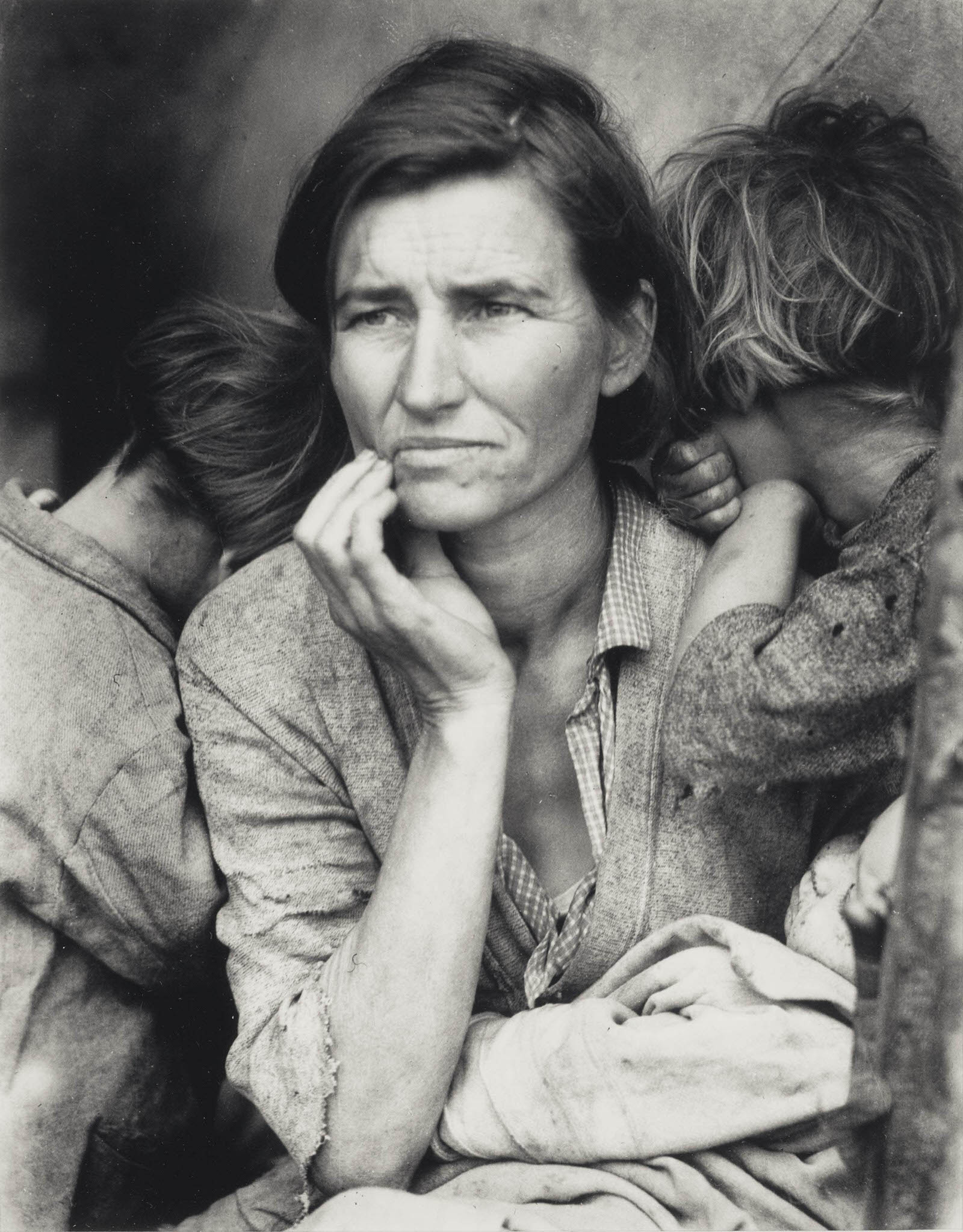 An iconic representation of the Great Depression, Dorothea Lange’s Migrant Mother features an impoverished woman alongside her away-facing children. The photograph was taken sometime during 1936 while the Great Depression was still in full swing and is an extremely famous example of documentary photography.

The picture moved masses and just days after its publication, the pea-picker camp the woman and her family had been located on received 20,000 pounds of food from the federal government.

Its influence comes from the feelings Lange happened to capture. The woman in question, Florence Owens Thompson, and her unkempt children all look dramatically destitute. The backstory Lange provided, an affirmation of the family’s poverty, further drove the point in: people were suffering.

Migrant Mother is still impactful today, representing in part both the history and art of the Great Depression.

A Man on the Moon 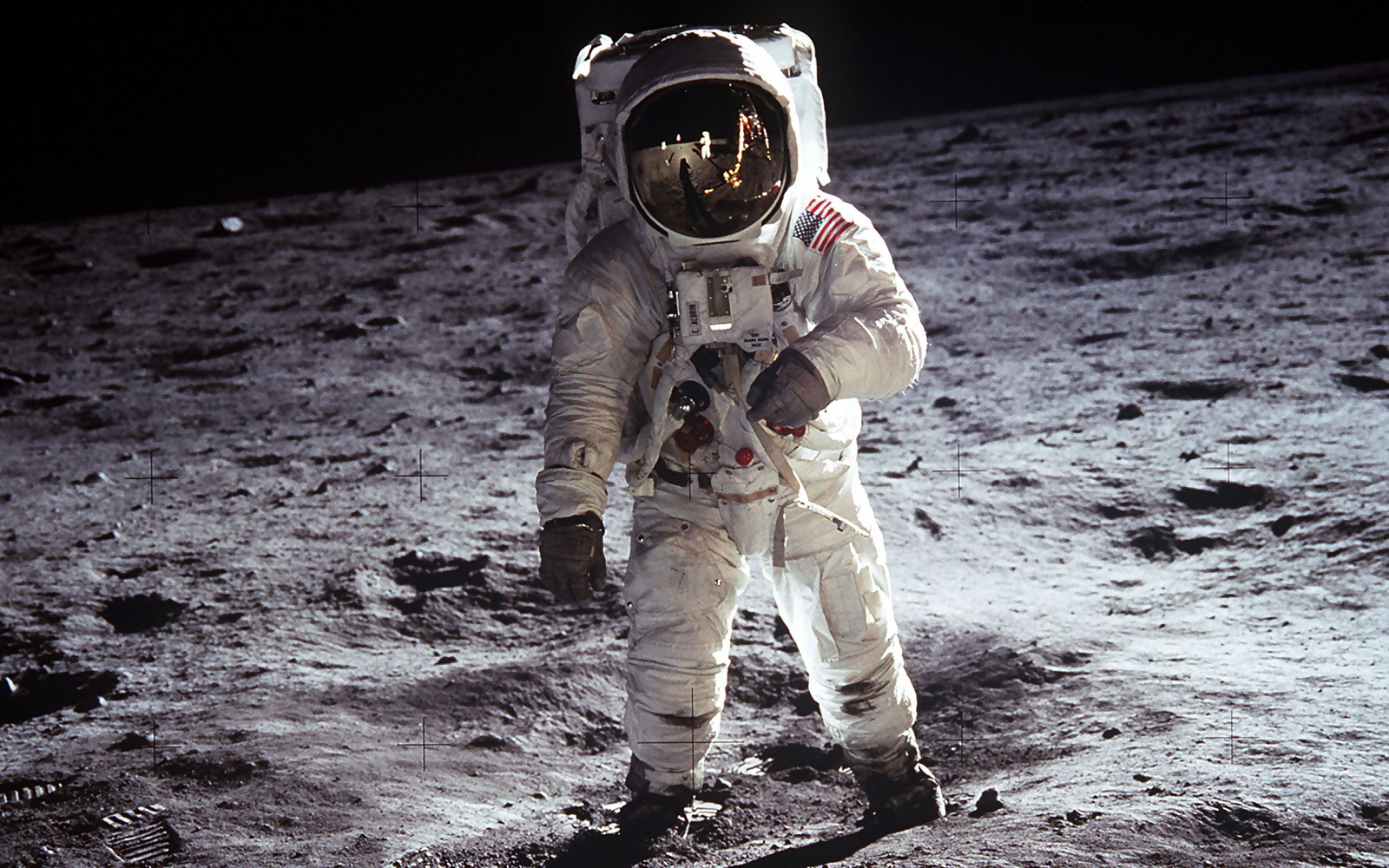 Taken by Neil Armstrong on June 20th, 1969, A Man on the Moon showcases astronaut Buzz Aldrin as he takes some of his first steps across the moon’s surface.

Equipped with a 70mm lunar surface camera, Armstrong set out to document Apollo 11’s expedition through a series of photos detailing the crew-of-two’s first steps, and the placement of the American flag.

Immortalized from all of those photos is A Man on the Moon. In it, Aldrin stands alone with nothing but the vast expanse of the moon as his backdrop. With not a modicum of humanity surrounding him, Aldrin is swallowed by the great unknown of space, capitalizing on the feelings of loneliness and curiosity that, even today, drive us to find life beyond the fringes of earth. His singular presence in the photo also punctuates the whole point of the expedition: a man landed on the moon. 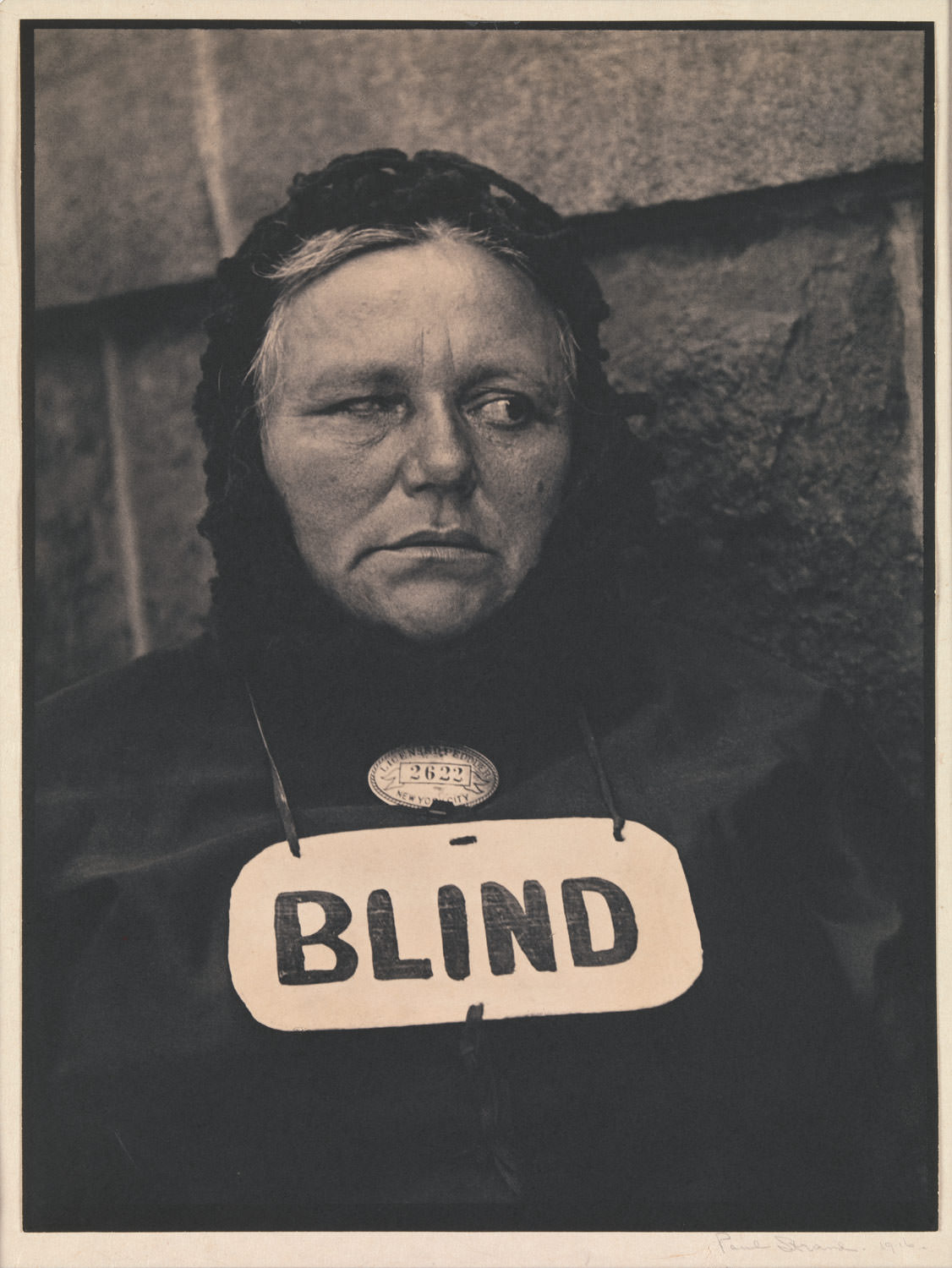 Famously created through the use of a camera with a false lens, the photo Blind captures a woman gazing off to the side, seemingly unaware of the fact that she is being photographed.

For this series of photos, photographer Paul Strand utilized a lens that was able to capture the opposite of what he aimed his camera at, conscious of the fact that people tend to act differently when aware of the camera lens. He endeavored to capture people as they acted naturally, and effectively helped to usher in the art of street photography.

Today street photography is a thriving, albeit, debatable art. Methods and approaches to the genre have been accused of being invasive. However, the art of street photography has undeniable beauty, and the potential to make powerful social and political statements.

Raising the Flag on Iwo Jima 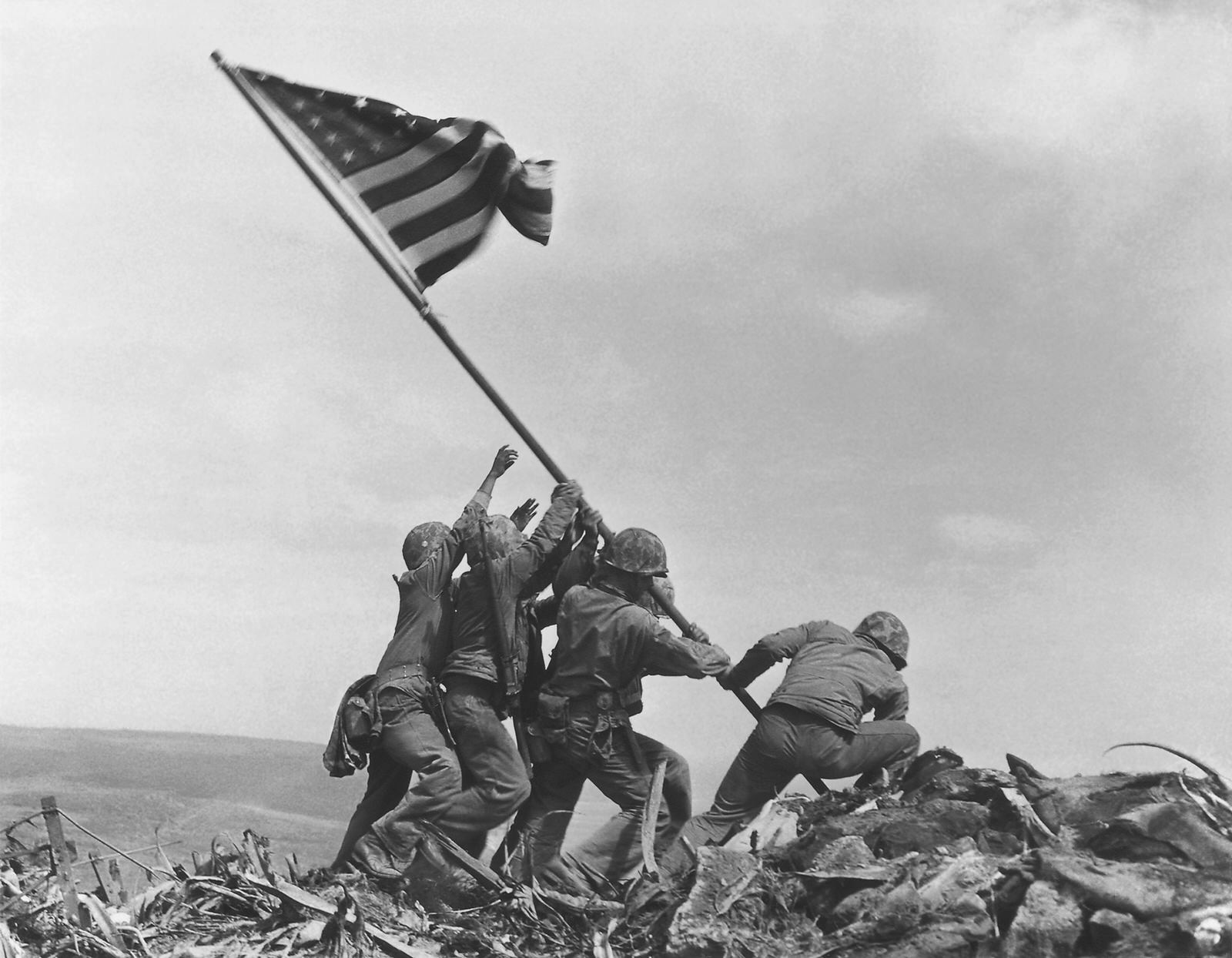 One of the most iconic photos of World War II, Raising the Flag on Iwo Jima by photographer Joe Rosenthal has been engrained nationwide into the minds of Americans as a symbol of victory and patriotism.

In the photo, Rosenthal snaps six American marines raising the U.S. flag on top of Mount Suribachi to mark its capture. The flag in question served as the commander-ordered replacement to a much smaller flag, and was hoisted up in order to inspire the troops present for the capture.

Rosenthal’s photo was published a mere two days after its capture, and immediately skyrocketed to fame. It became so famous, and so positively regarded, that Rosenthal eventually won a Pulitzer Prize in Photography for it.

Today the photograph continues to represent America’s role in World War II, and perseveres in inspiring feelings of victory and unity. 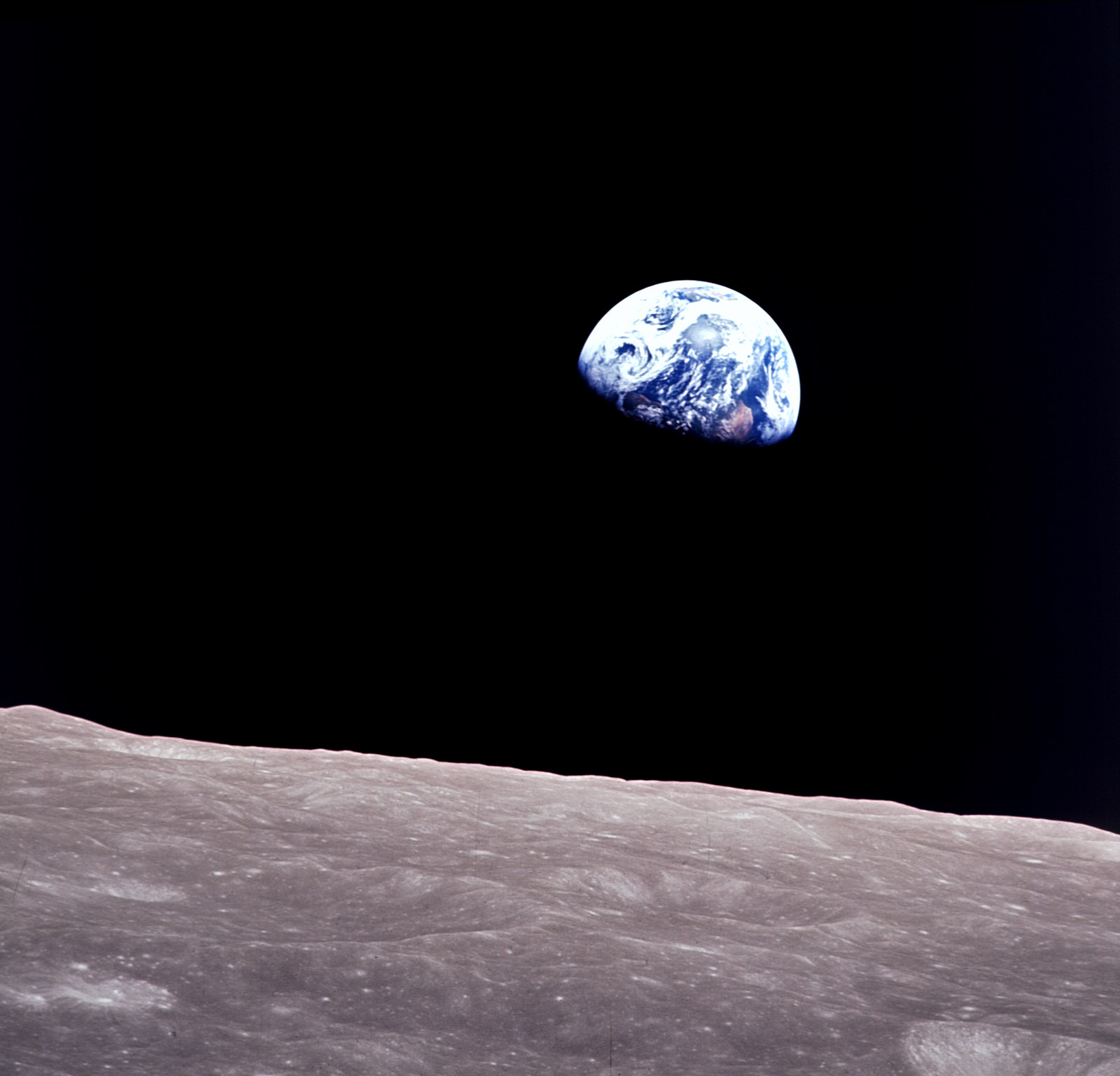 This eponymous photograph depicts Earth as it emerges from the darkness of space, with just a cheeky sliver of the moon decorating the photo’s foreground. Captured by astronaut William Anders during the Apollo 8 voyage, Earthrise was, and still is, a shocking reminder of our lonely existence in the vast expanse of space. And yet, shocking as it is, great beauty lies in the marble-like swirl of blue and white cropping out from the monotonous blackness of our galaxy.

The photo capitalized on the beauty of our planet during a time when we were looking for beauty beyond it, and rippled through the world in such a way that people have used the photo repetitively to exemplify why the preservation of the nature of Earth is worth it. 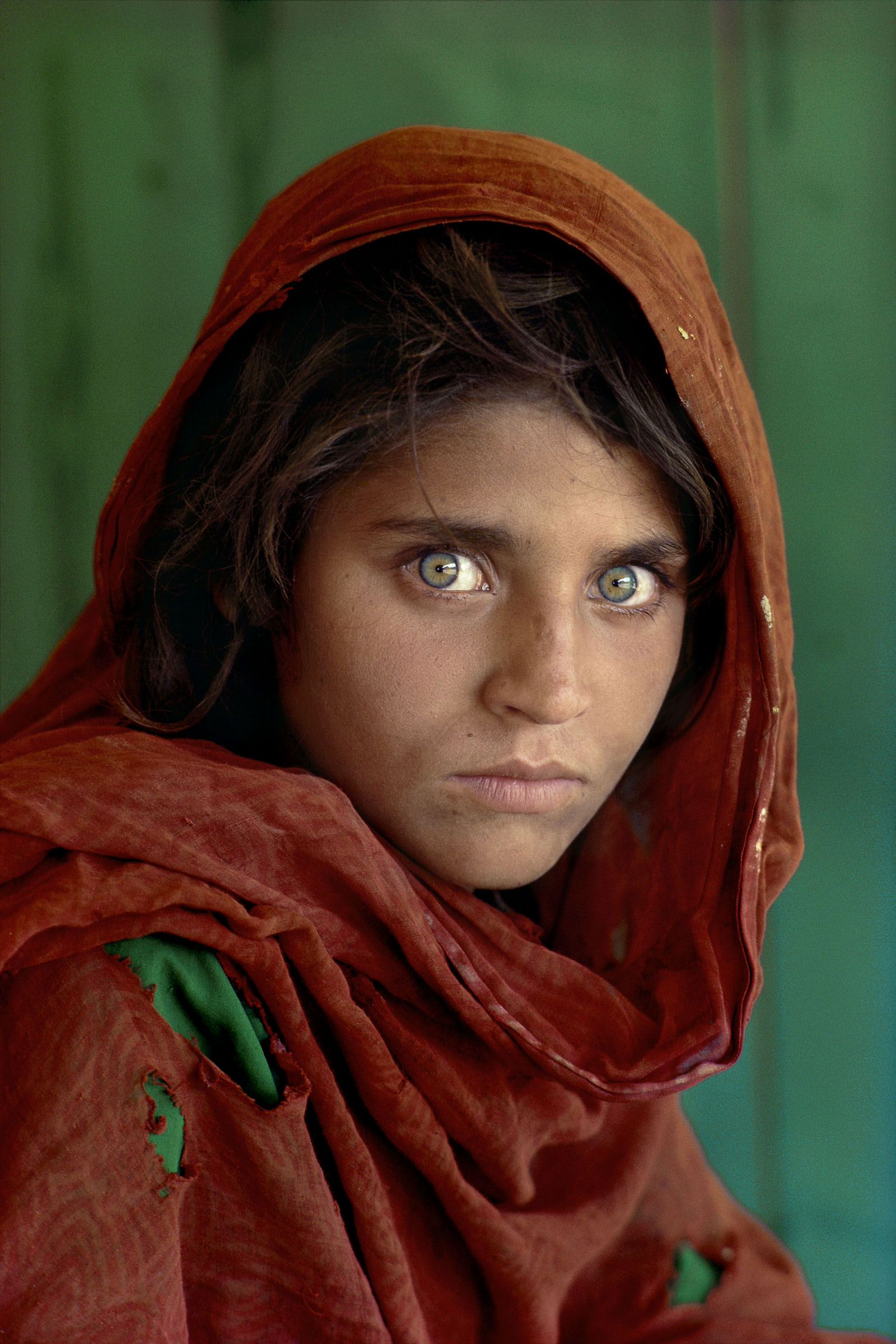 Known for her intense stare and bold green eyes, Afghan Girl came to symbolize the struggles of refugee women to the Western world. Taken by National Geographic Society photographer Steve McCurry during the Soviet occupation of Afghanistan, Afghan Girl (whose real name is Sharbat Gula) managed to conceptualize everything about the struggles of refugee women all in the photo of one, tattered, gritty girl.

It is an undeniably well-framed portrait that conveys a world of emotion through one appearance; Gula’s stare is intense, determined, and unafraid, and her clothing, bright red and ragged from wear, speak volumes about her struggles as a refugee. Today, Afghan Girl is still one of Nat Geo’s most famous issue covers. 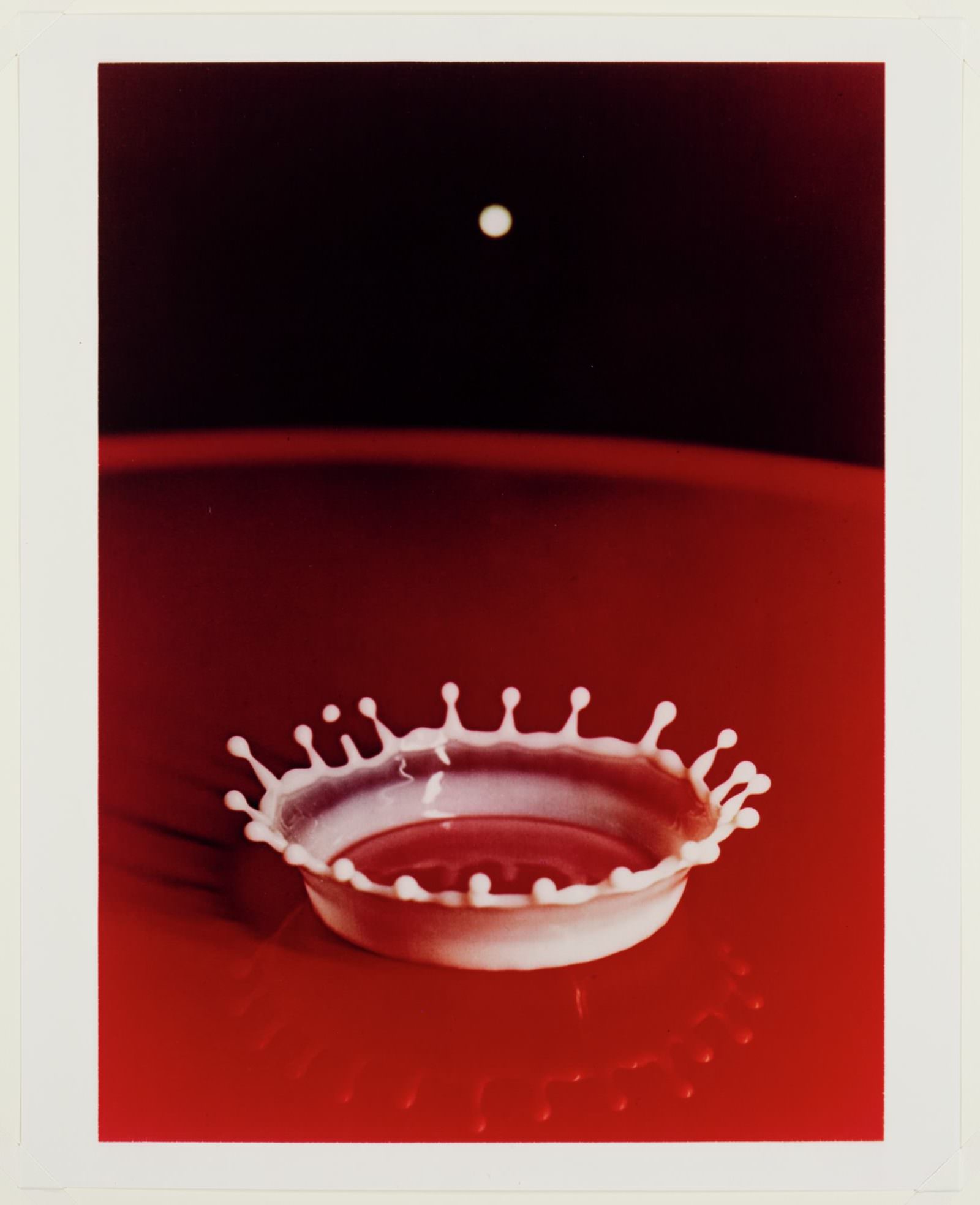 Taken in 1957 by Harold Edgerton, Milk Drop Coronet was a photo that helped change the mechanics of photography forever. The image, which captures the resulting splash of a milk drop striking the surface of milk, was the first of its kind to stop time.

Prior to its capture, photographers had struggled to photograph dark scenes and fast-passing moments. Harold Edgerton had set about to change that. His inventions and experiments helped to pave the way for cameras that were able to shoot in low lighting and capture scenes moving too fast for the human eye to perceive. A technical genius, Edgerton is accredited with offering great contributions to the field of stop-motion photography. 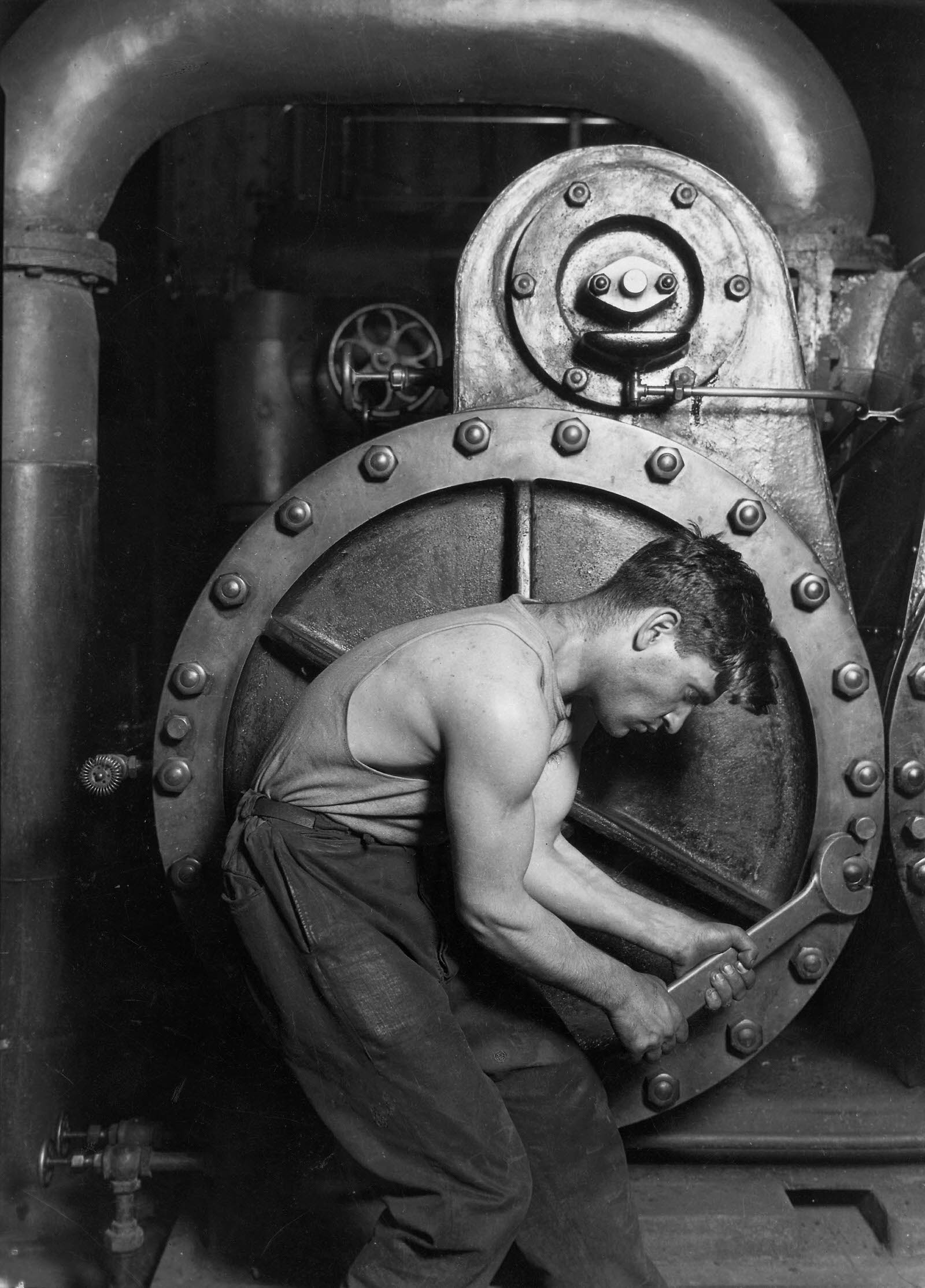 In an effort to document industrialization, photographer Lewis Hine spent time photographing industrial workers and the environments they worked in. At the time, Hine’s work brought awareness to the conditions these workers tolerated, which were quickly diminishing in quality. While Hine’s photography is considered a form of documentary photography, the photos he chose to showcase were carefully posed and selected to leave the greatest audience impact possible. Hine’s work is a series which showcases the fact that a photo doesn’t necessarily have to be a candid or unexpected shot for it to work as a political or social statement.

View from the Window at Le Gras 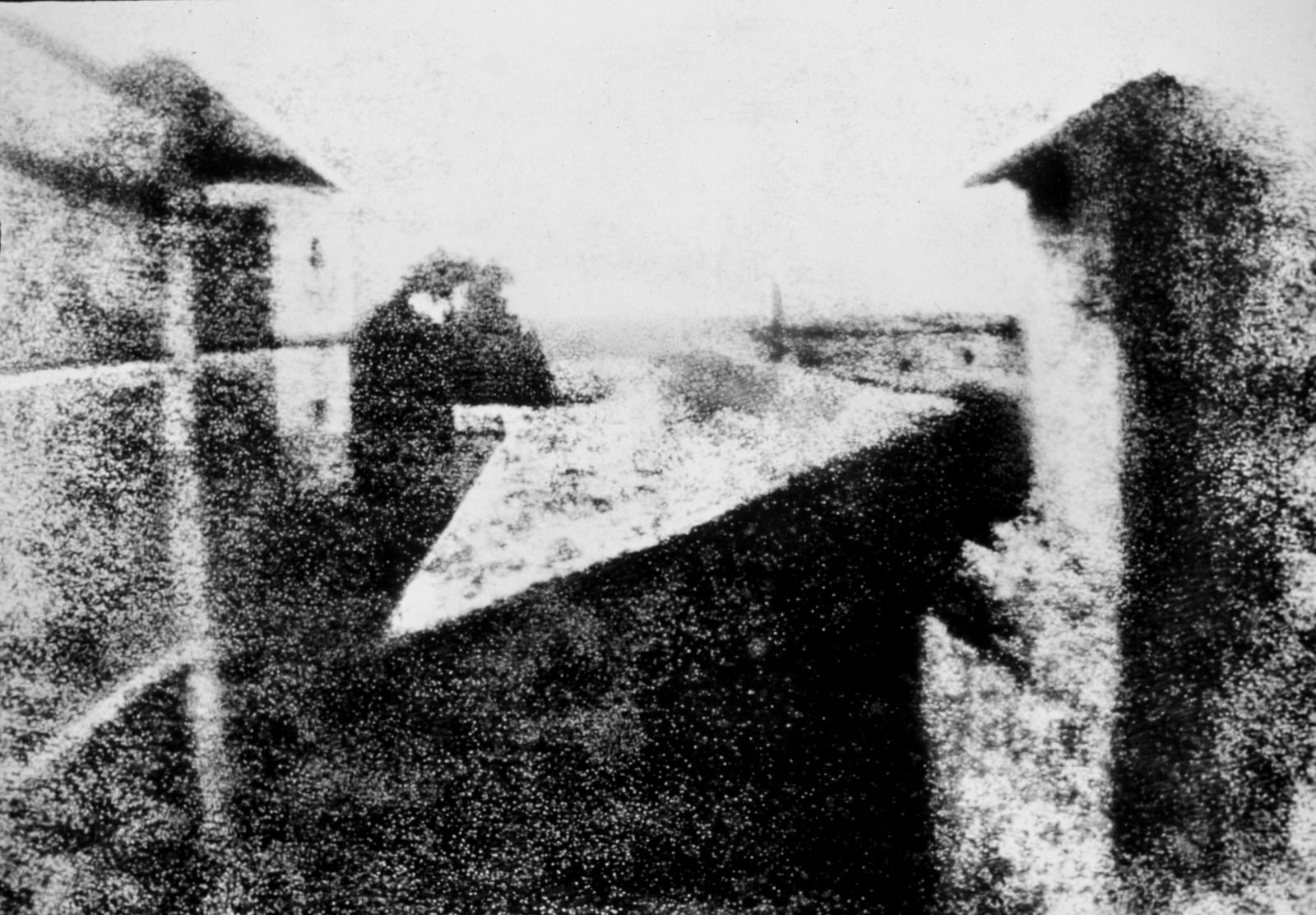 And finally, perhaps one of the most historical photos of all time, View from the Window at Le Gras, by Nicéphore Niépce. Niépce, a French inventor, is often credited as the inventor of photography. View from the Window at Le Gras was the first permanent photo ever recorded as being taken. Niépce had used a technique he had created, heliography, to permanently capture the photo, using asphalt to engrain the image in metal.

The camera he used to capture the photo also bared very little resemblance to the ones we use today. Niépce used a camera obscura (otherwise known as a pinhole camera) to capture the image in question. There’s not much that needs to be said about this photo. The impact of the image doesn’t come from its art, which is severely lacking, but instead the milestone it represented in the history of photography. The first of any kind, it serves as a reminder of how far photography has come both technically and artistically.

What each of these pieces teach us is that photography intertwines deeply with history. These photos show that any sort of photo can become ingrained in history, whether they be candid, posed, technical, or some combination of methods.

Regardless of what path to fame was taken, these photos have made lasting historical impacts. They became famous for detailing and propagating the culture, politics, or marvels of their eras, and have continued to be influential to the modern world. They also show the power and worth of photography – the ability to freeze a moment in time and immortalize it for the pleasure and learning experience of future generations.

Vandanni is freelance writer and photographer from New York. An animal enthusiast, she is currently focused on developing her wildlife photography portfolio and can be found at her Instagram accounts Skythequaker_and_me and danni_shiv.