The camera wars never really cease, they just get more and more involved as camera revolution and evolution continues. In full-frame mirrorless interchangeable lens cameras (ILCs), Sony came out early with a fantastic line of cameras, including the Sony a7R III with great performance and potential.

Many photographers wondered when the other major players in the full-frame 35mm camera format would create competition. Well, it’s happened. Nikon recently announced two new cameras with a new lens mount, the Z series of cameras. The Z6 and Z7, with the Nikon Z7 being the top of the line so far.

And now, Canon has just announced their own full-frame mirrorless camera line, the Canon EOS R. The first from Canon comes in as what many will see as a consumer level model. What else Canon will release remains to be seen.

Let’s Compare What We Have Right Now: 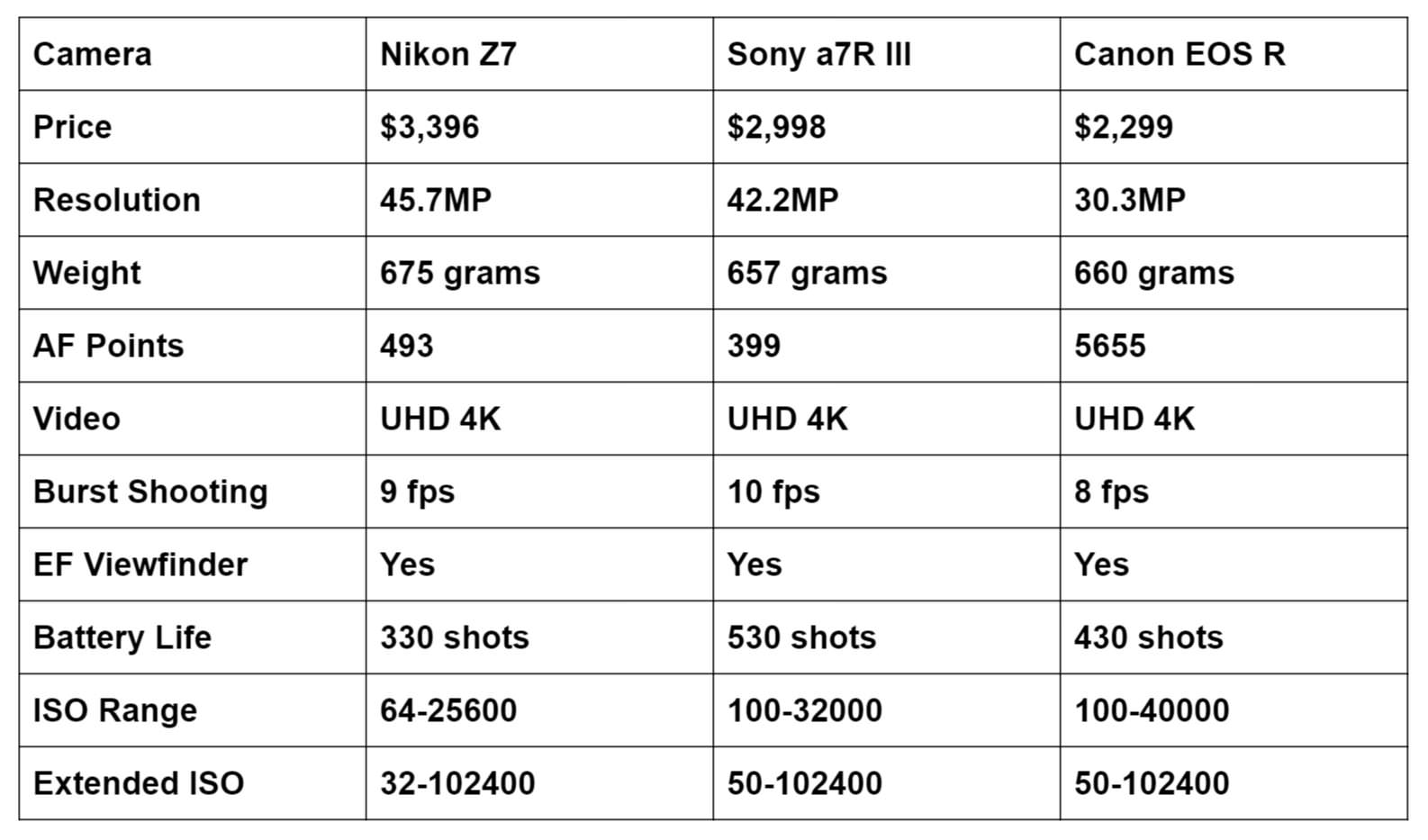 Both Nikon and Sony use back-illuminated sensors, with the Z7 having 45.7MP compared to the a7R III with 42.2MP. If you are looking at the pixels, the Z7 is very much the same as the Nikon D850 DSLR.

The Canon EOS R looks to be coming in with a 30.3MP sensor, so it should prove to be more of a competitor with the $1999 Nikon Z6 (24.5MP) than the Nikon Z7 or Sony a7R III. Some may consider this Canon full-frame mirrorless to be most closely matching their EOS 5D Mark IV

One thing we sometimes forget to look at is the lowest ISO. Nikon has ISO 64, 32 extended. Reminds me of the low ASA of early Kodachrome and Pan-X. Yes, I’m old.

Okay, this is the really big difference that Canon has over both Nikon and Sony. 5655 focus points! How that will actually work in real life remains to be seen, but rumor sites have the EOS R being well received by early testers.

Canons have always been absolute beasts where AF is concerned, ever since the first EOS 650 and 620 35m cameras came out in the 1980s.

One key point to remember is that Sony has the Eye-AF feature, which many portrait and event photographers love for its eye detection. Canon and Nikon mirrorless are lacking this feature.

Pretty much tied here. A high-end or pro mirrorless camera better have a good one. All three of these have close to the same magnification. Hard to spot much of a difference.

You can shoot UHD 4K video on all three, but the Z7 has a nifty new feature.

The Sony and Canon specs are very close to each other and to the Nikon, which some early commenters on social media have seen as a minus mark for the Canon. Canon is definitely one of the leaders in DSLR video, but this new mirrorless of theirs seems to be aiming at higher end, but definitely non-professional, photographers. Will users see much of a difference? I’m sure some will.

Canon and Sony both have full lines of extremely high-end professional video cameras with specs that are absolutely insane. Perhaps Canon is holding back video specs from non-professional level cameras, for whatever reasons they have.

The Nikon Z7 and Z6 use a single XQD card slot. XQD is an extremely fast, very high-capacity storage format currently only manufactured by Sony and soon by Nikon as well.

For now, Sony will continue to use dual SD cards for the a7 line, but many of us think that is going to change. There are rumors that Nikon may be able to support the CFexpress in the future with new cameras and firmware updates for current cameras.

The Canon mirrorless uses one, yes ONE! SD card. SD is a fine format of card, but putting SD cards into the EOS R pretty much tells us where Canon is anticipating this new camera to land. Firmly in higher-end consumer, possibly prosumer, level.

The Nikon Z7 and Z6 can share the same battery at as the Nikon D850, but a slightly newer version has been released labeled the EN-EL15b. The charge lasts for only 330 exposures, which is significantly lower than the Sony a7R III estimate of 530 exposures per battery charge.

Canon EOS R comes in right in between the two at the 430 shot range. It also depends on what viewing and shooting modes one is in, but there will probably be auxiliary battery packs coming soon for Nikon and Canon.

Sony obviously has a full line of lenses already available, and many high-quality third-party offerings come to market all the time.

Nikon has the new Z mount lenses, a select few announced with the cameras. Importantly to many, Nikon also made the FtZ adapter to let literally scores of F mount Nikon brand lenses be used on the new Z series. Obviously, there are also many third-party lenses for Nikon F mount that have been made in the last 60 years or so.

Canon has announced some cool new lenses for the R mirrorless, including a compact lens and an awesome 28-70 f/2.0! There is also an EF to R adapter – three actually. One of them appears to have a focusing ring, another with a drop in filter slot, and a basic one. Status of M to R or FD to R adapters aren’t known. If I go back to 1959, I suppose I could wonder about an R to R adapter.

Will there be third-party lenses for Nikon Z or Canon R mounts? It depends on whether the two camera brands release the mount secrets or if third-party designers have to reverse engineer the compatibilities. If the past bears on the future, we will see some third-party lenses, but maybe not any time soon.

This War Will Have Good Results

In the camera market, competition has always been a good thing. As brands jockey for position, the users end up with more and better features and higher quality.

It has happened before. Nikon and Canon battled it out in previous decades with their 35mm film cameras, both professional and consumer models. Other brands such as Minolta, Pentax, and Olympus also created spectacular camera models and systems, several with innovations that are still standards for cameras today.

From those earlier brand competitions came such features and improvements as ergonomic design, off the film plane through the lens flash metering, multi-zone metering, high-speed shutters, and fast, accurate autofocus.

In the full-frame digital camera market, we have had Sony, Nikon, Canon, Pentax, Leica all making great cameras for some time. Now, several of the brands are in the full-frame mirrorless battle. Will another manufacturer join soon? Perhaps. I love reading the rumor websites. A full-frame surprise entry may come from Panasonic.

What this all should mean for the photographer as a consumer is that innovation and refinements will keep on coming. In the battle of the camera brands, the winners are us. It’s a very good time to be a photographer.

Links to keep you updated:

Stephen Harker is a professional photographer since 1977 in the fields of architecture, commercial realty, and environmental portraits. Personal projects include Route 66 travel photos and the beauty of nature in California, New Mexico, Colorado, and Texas. Currently providing commercial photography and teaching in Oklahoma City, Oklahoma.