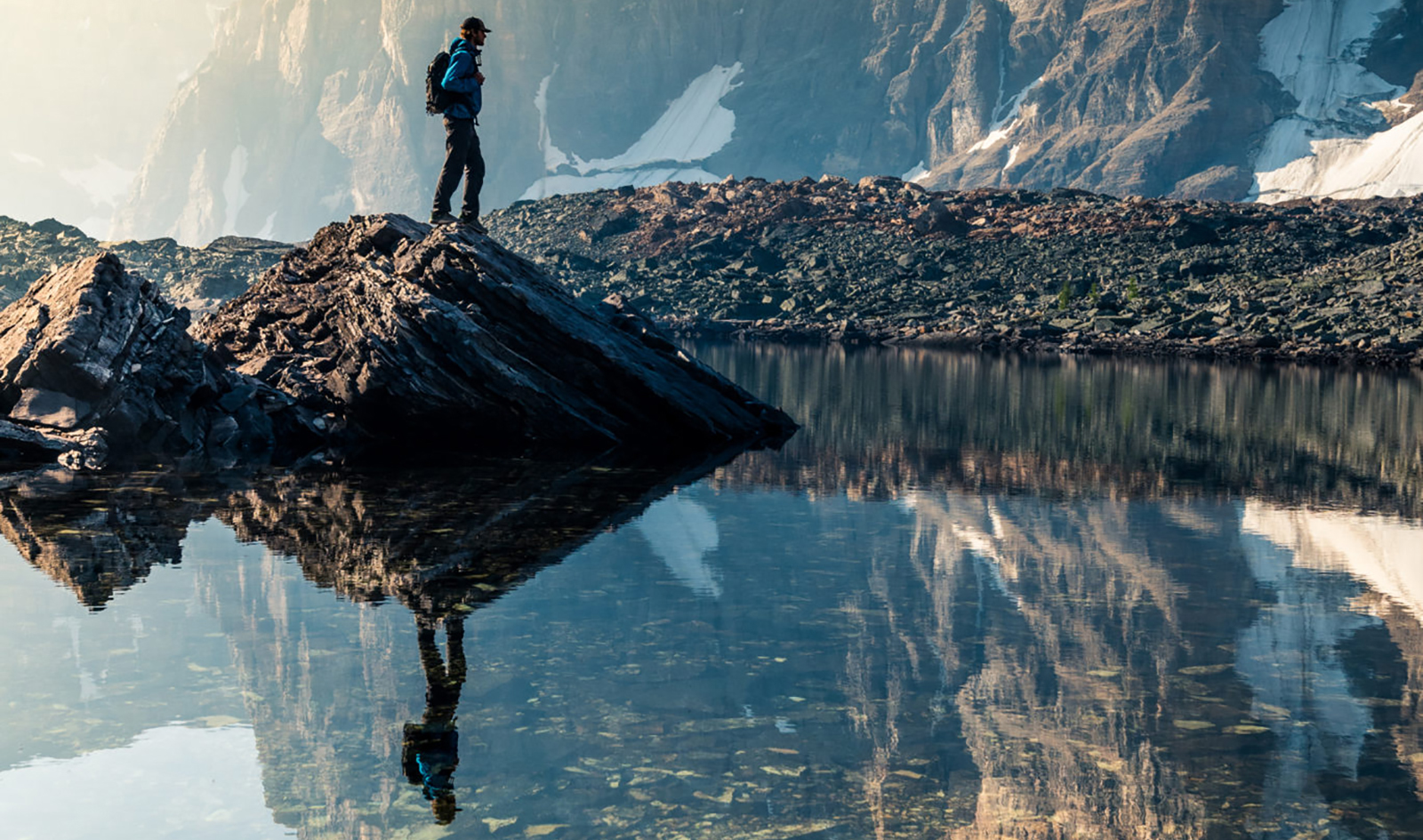 Capturing a mirror-like reflection in perfectly still water is a dream for many landscape photographers – and there’s no better place to do it than in the Rocky Mountains.

Wyoming-based outdoor photographer Stephen Shelesky is pretty familiar with the snowy slopes. Although his interest in photography began when he was young, his experience shooting his friends during ski trips to Colorado turned a casual hobby into something more. As a nature lover, Stephen says capturing images of the mountain landscapes helps reinforce his passion for the outdoors.

“My love of photography continued to grow because of that connection to nature, for me,” he explains. “Being outside is where I’m most at peace, and it’s great to try and convey the feeling to others through my photography.”

So, when Stephen headed to Eiffel Lake in the Larch Valley above the famous Moraine Lake in Banff National Park, he was on a mission to capture the beauty of the dramatic scenery. The destination was one of the last stops on a four-month road trip he was taking around western North America, and he’d worked out the perfect location. 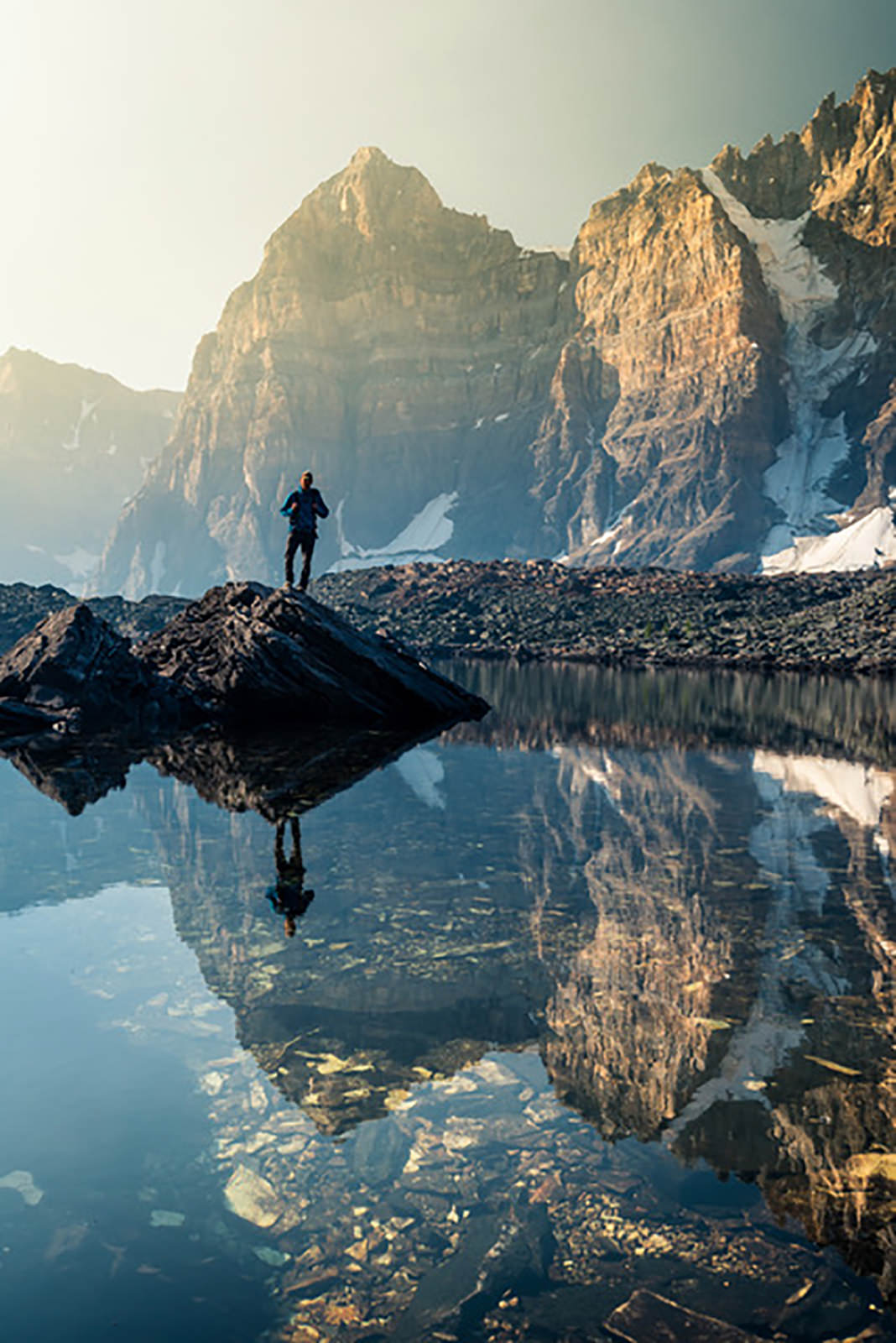 “I originally arrived to photograph a sunrise with the famous view of the Ten Peaks Range behind Moraine Lake, but had planned to escape the crowds by hiking afterwards,” Stephen says. “I actually had a specific shot in mind ahead of time and through my research thought it would be found at Eiffel, but it turned out to be the wrong place.”

While Stephen might have been disappointed initially, his scramble down to Eiffel Lake had revealed a spectacular scene – an absolutely perfect reflection. 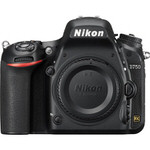 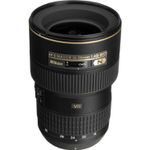 To make the shot more interesting, Stephen wanted to include a human element, so he set up his tripod and aimed at the pristine lake. He adjusted the settings on his Nikon D750, using a 16-35mm f/4 lens at a focal length of 32mm, a shutter speed of 1/200 sec, aperture of f/10, and ISO 320, and then, he got in front of the camera.

“I had my camera shooting on intervals while I ran in front of it to stand and stare down at the beautiful Ten Peaks Range,” Stephen says. “Originally, I was fixated on this being a wide shot, but quickly realized that created a less intense final product.” 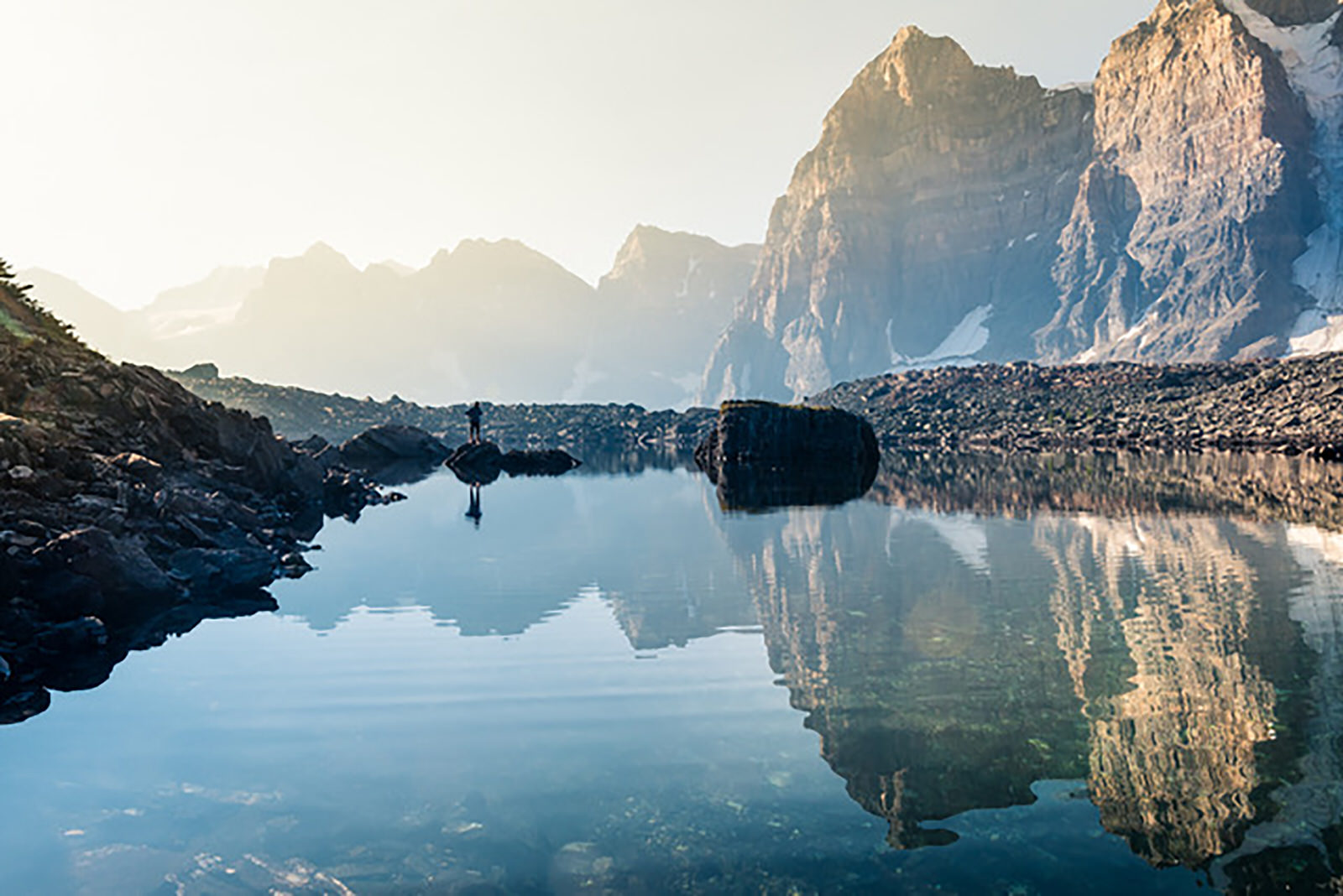 Framing the shot up close allowed Stephen to capture a more dramatic representation of the mountain peaks – displaying the tallest peak in the range, instead of including the full ridgeline of lower mountaintops.

With his composition tightened up and his timed shots captured, Stephen used Photoshop to lift the shadows a bit, add clarity and contrast, and did some light split toning to warm the highlights and cool the shadows. 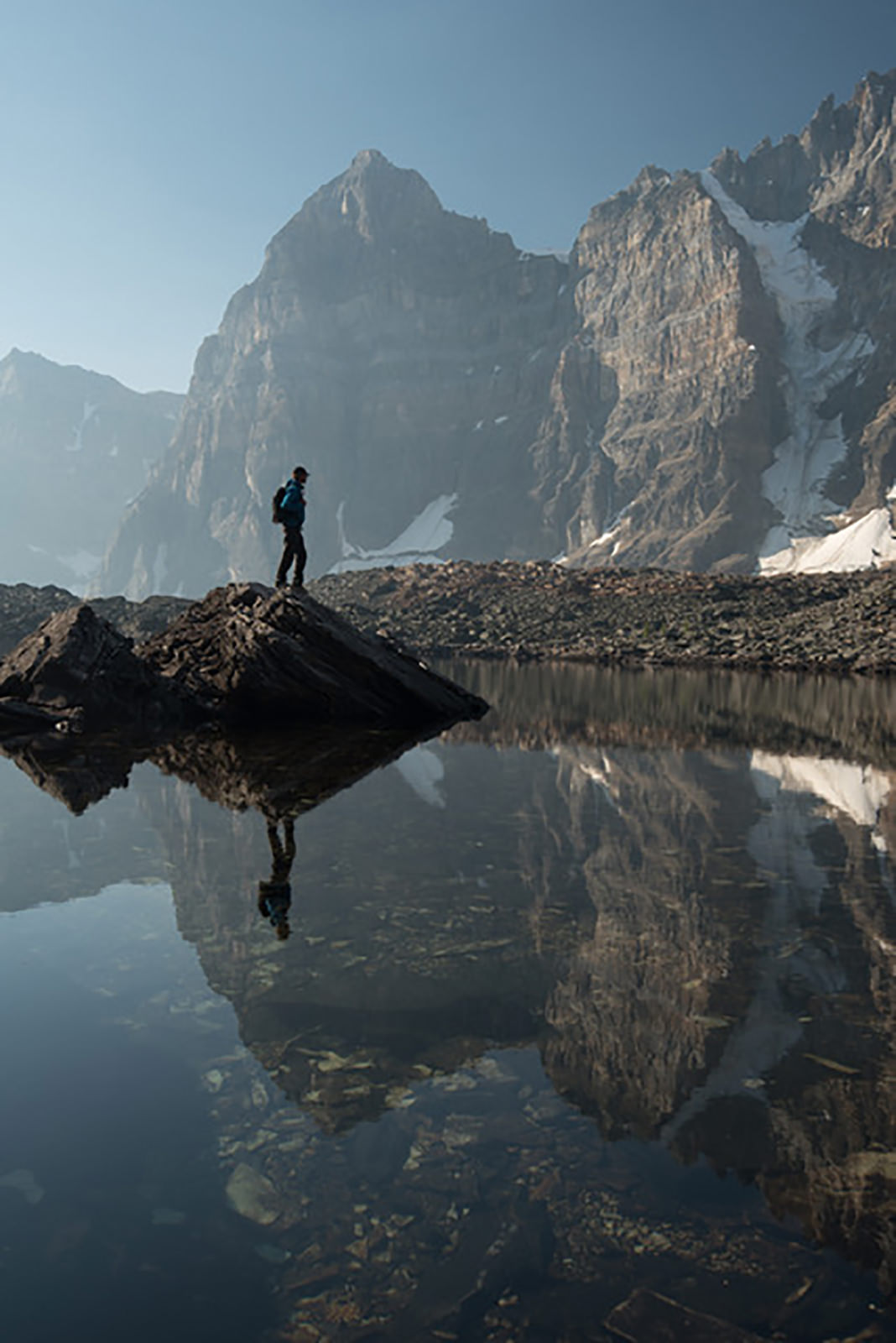 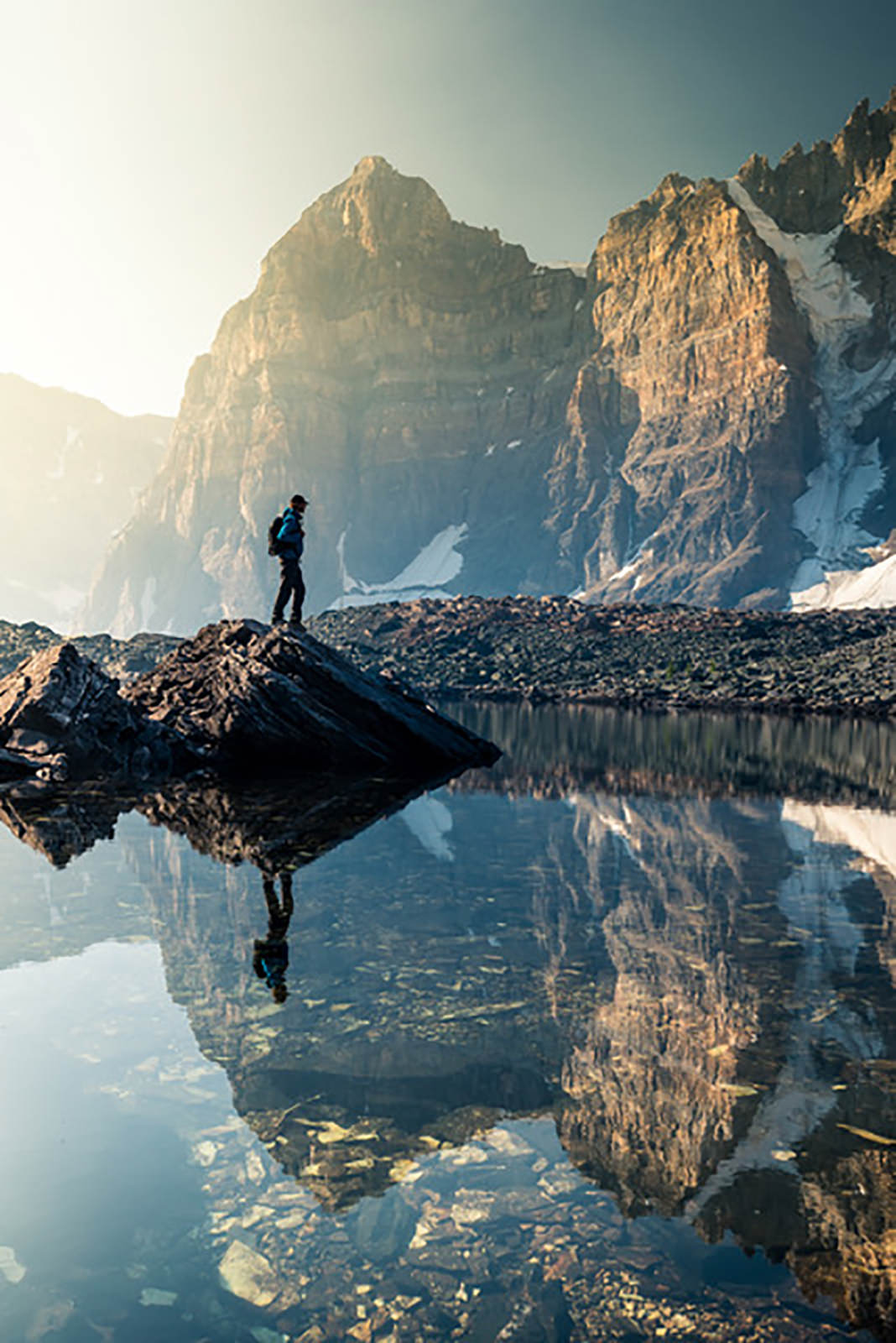 And, although his final shot might not have been the picture he had in mind when he headed up to Eiffel Lake, the end result is an eye-catching capture of an almost surreal natural scene – one he hopes will encourage others to get out and enjoy the world around them.

“I was able to get creative at Eiffel, capturing a unique perspective that I didn’t have in mind at all prior,” Stephen admits. “The goal with my work is always to inspire others to get outside, so they can gain an appreciation for our natural environments and gain motivation to protect the many areas that are being degraded by human activity.”