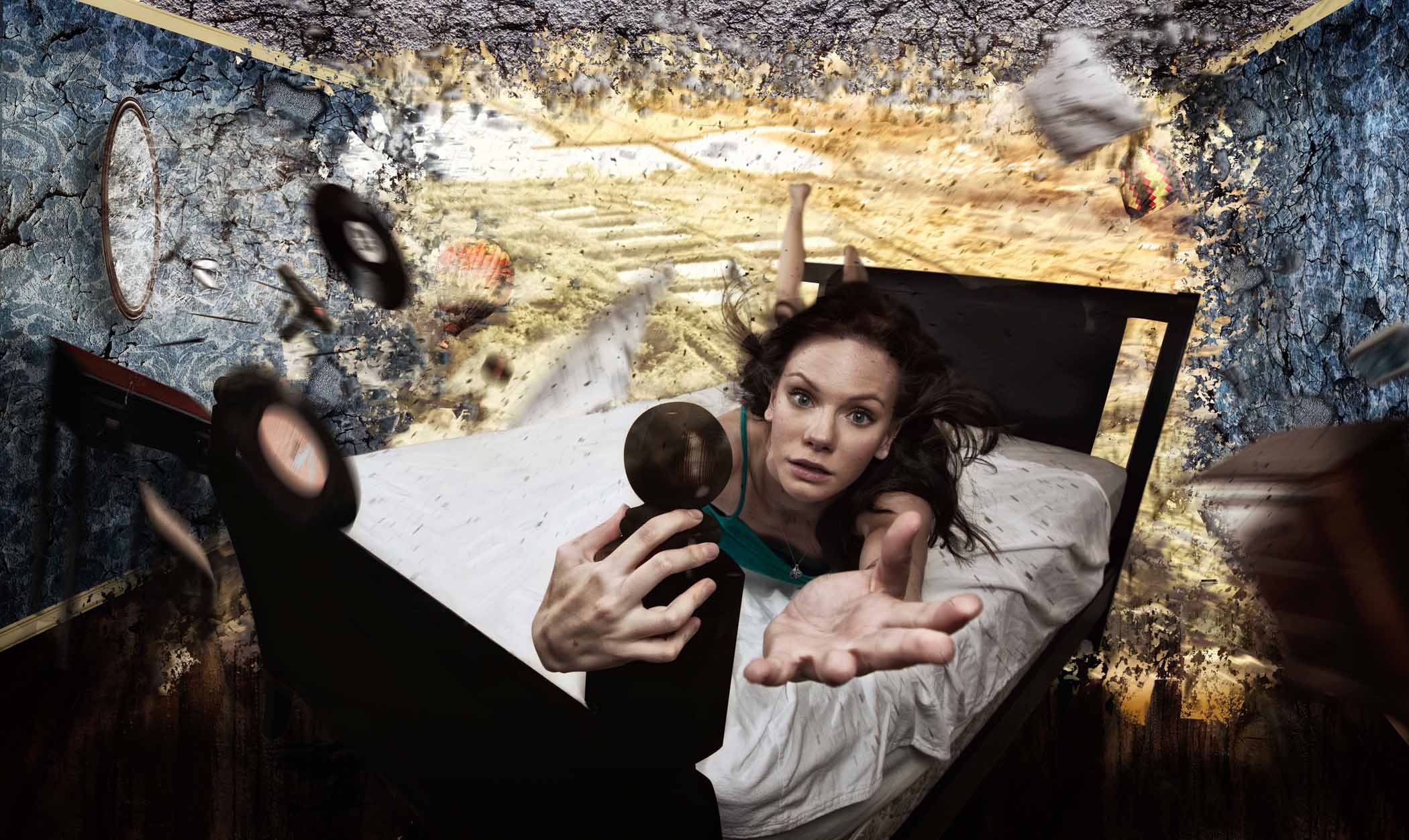 “With most things, I kind of know my limits – there are certain jobs that I know I can’t get. But for the things that I know might be possible, I never say it’ll never happen. I say, ‘I might get there.’”

Keean Afrasiabi is a legally blind photographer and retoucher based in Los Angeles. His current works emphasizes the use of lighting and implementation of 3D design into campaigns for athletes and brands. Recently, he’s also been creating what he refers to as “high-end” animal portraits, unleashing his technical and creative skills to make truly memorable photos of client’s beloved pets.

In our interview with Keean, we talked about the limitations he faces as a visual artist with partial vision, how he got into 3D design, and how he engages in client work.

Can you help me understand the limitations that you face as a result of your blindness? Help me and the readers see through your eyes.

The limits that I have, I haven’t exactly tested them, but I kind of know through daily living how they come up. So a big one for me is, as an athlete myself, I’ve always liked sports and I’ve always liked, I wouldn’t say sports photography, but I always thought that normal, on-the-field, during the game sports photography was always super limiting. It has its place and there’s always a reason and a place for it. But, one, I was always kind of disappointed in its outcome. And, two, I knew I couldn’t do that kind of photography – it moves too fast, the situation itself is just not controlled enough for me to do something like that. So as I got more into Photoshop, and as I got more into work that inspired me I said, “Ok, can we take a different approach? Are there ways to show off an athlete or a product in more of a creative sense?” And so, two people that I follow for sports are Joel Grimes and Tim Tadder, they do amazing campaigns, and it’s all based around that creative alternative to athletics. That’s one way I figured out that a limit I have is not not doing sports, but doing it differently.

Another one is shooting on location. I cannot drive. So that makes that a nightmare. It sucks. But that led me into a lot more studio and composite work.

Could you describe what’s within your field of vision?

If you could imagine three feet or five feet between us. What I could see is the shape of your body as pretty general, like where your head would be, but things like eyes, lips facial hair, freckles, the type of clothing you have on, your teeth, all the little details like that aren’t even there. If you had a desk, I could see the desk is there, but nothing on the desk; not the drawers, nothing like that.

You have said that photography has shown you a world that you had been missing out on. Could you tell me what your world was like before compared to now?

I feel like the stuff I’m missing out on isn’t as important as I thought. When I started doing my animal portraits I noticed the detail in the dog’s face, their gums, and little random things like that. I’d say, “Oh, that’s amazing!” And then people would say to me, “Huh, that’s crazy. I didn’t even notice.” I started to notice that the camera would pick up things that people wouldn’t see or bother to look into. So that told me that, yeah I’m still missing out on a lot, but the camera still picks up more than enough. Most times. The thing that’s kind of weird is that I’m not in that space of total blindness, so it’s not like I don’t know what things look like. But I am in a grey space where I don’t see the same as what a human eye usually sees.

Have you ever been passed up by a potential client as a result of your vision?

In some form, yeah. But when I do take on a new client I’ll tell them all the specifics of my vision. I’ll say that at the end of the day I have to look out for things way more than other photographers, because I know I have to get it right and be precise for me; just so I don’t have to hassle with it later. So in a way it’s good because I’m over-analytical and set up. I don’t think it has hindered getting photography jobs.

Taking photos is just one aspect of the artform, but the hours spent editing and reimagining the photo is an entirely different beast. What inspired you to first sit with a single image and rework it in Photoshop?

I started like anyone else. What brought me to spend more and more time in post were the people I found online. I found idols really early on; mostly in fashion. With most things, I kind of know my limits – there are certain jobs that I know I can’t get. But for the things that I know might be possible, I never say it’ll never happen. I say, ‘I might get there.’ The resources are totally there and that’s what pushed me. Even if you’re totally self-taught, you can find something to guide you into that next step.

You also work in the field of 3D design. What was the learning curve like?

Oh man. When you jump into 3D it’s so outlandish, it’s so hard to wrap your head around. And I have to preface that the program that I use is Blender and it’s totally open source. And it’s great if you want to learn, but moreso the community is there. Most of the tutorials I learned through were free, or my school provided a subscription through Lynda and it got me going. But it still took me a year to get my head around creating something that was up to my standards. I alway try to tell people this when they’re learning something new: No matter how long it takes to learn, you’ll eventually get there. The learning is the hardest part, but of course it pays off. 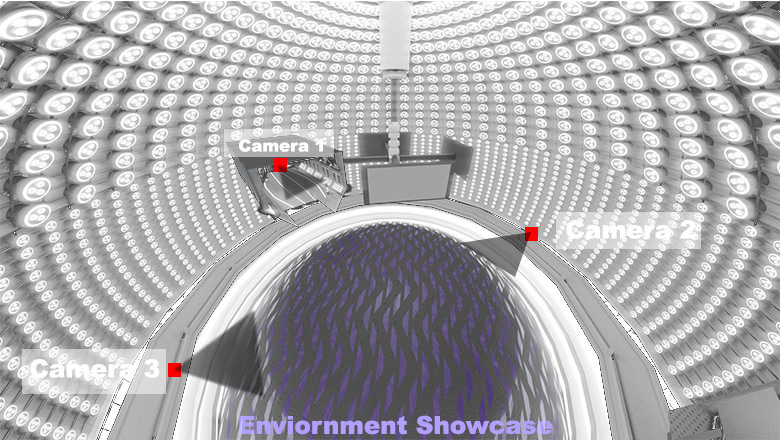 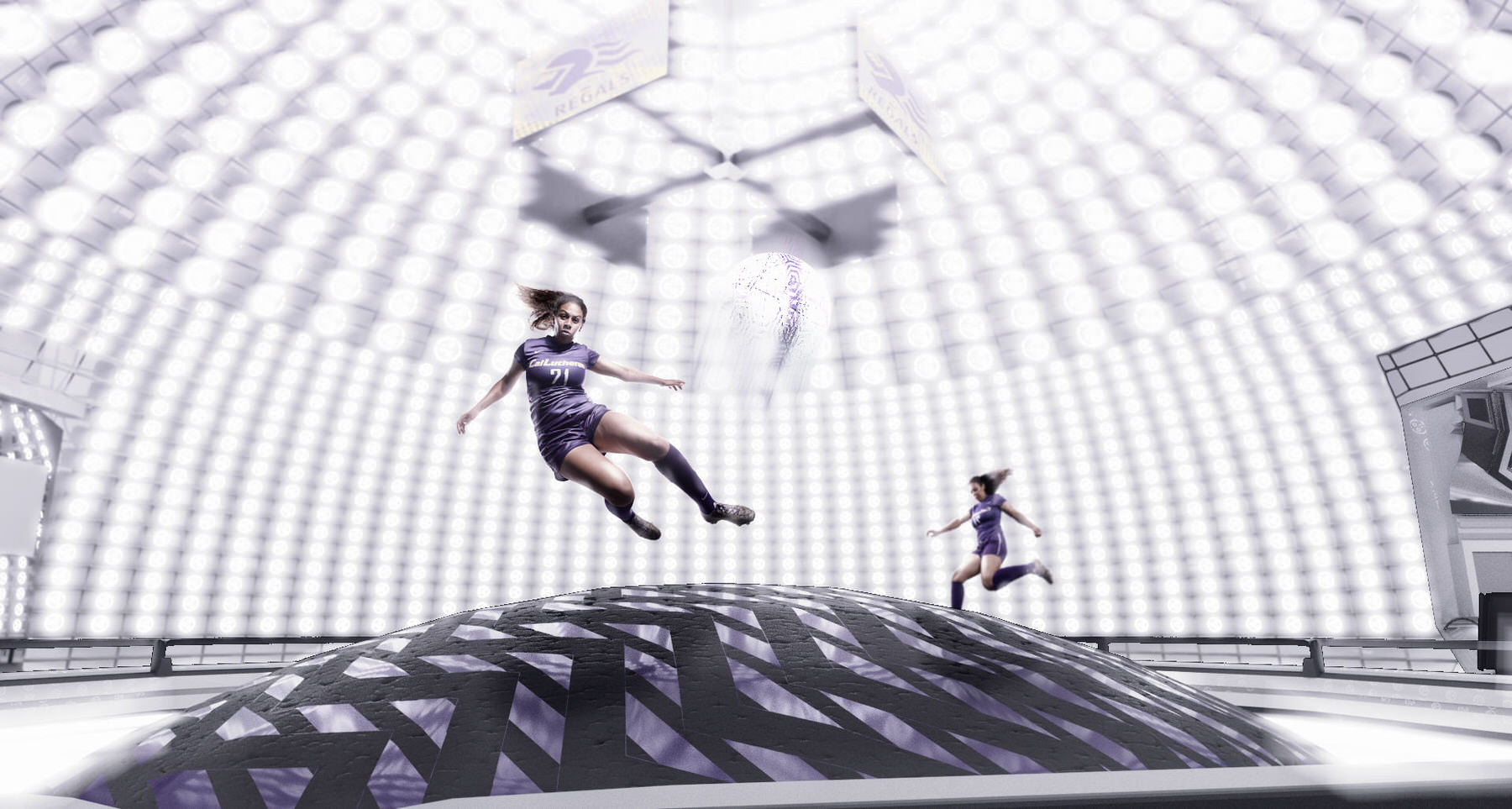 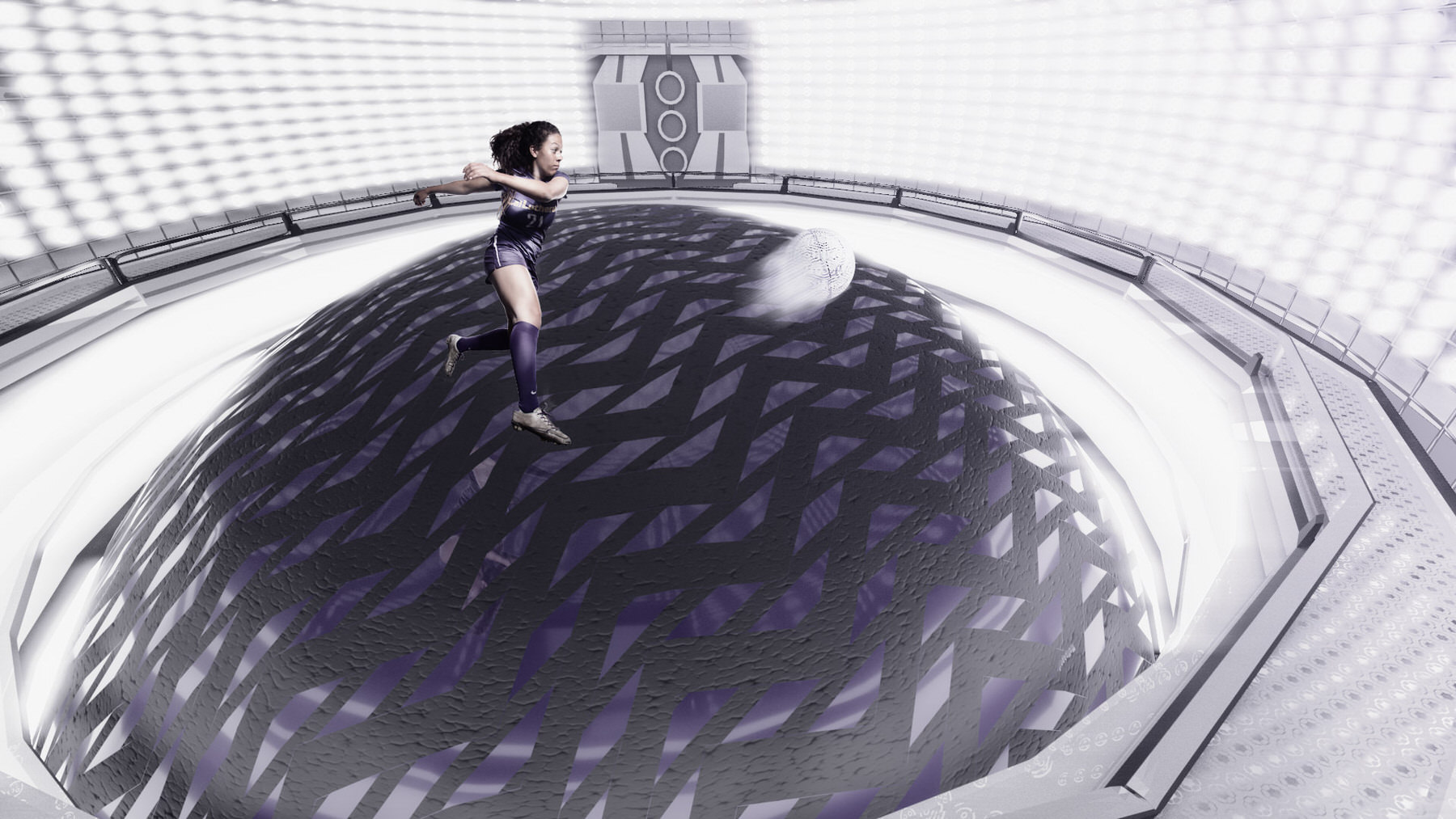 Instead of layering every piece (i.e. the bionic arm football player shown above) for every angle of a composite image to make it match with random assets, you just have to build the environment once and put other cameras in, matching perspective for the person. You don’t have to worry about finding other angles of this random asset (like a wall or mountain) for every extra pose/picture in the series.

A look at my old composite method:

A look at my new composite method:

The reason for learning 3D was just for efficiency in composite series, the flexibility to use a bunch of images from a shoot regardless of the pose or angle it was shot at.

What are the essential tools of your trade?

A lot of people, when they talk about pure photography, camera and body and lens are all like your number one thing. That will define what you do. But when you start tacking on other factors, like, not just retouching, but heavy compositing and very situational shoots, the camera, body and lens almost take back seat. What ends up being most important are posing, or at least getting them into the right motion, especially for sports; the theme; and then, on top of that, lighting is really what’s going to set your final image apart. It’s mind-blowing the difference between a shoot that’s planned out with lighting and everything beforehand as opposed to a shoot that’s not. Yes, it’s more work in the beginning, but at the end of the day you’ll feel better about the image and everyone else will notice the difference, too. For lighting, I use a beauty dish, a five-foot Octa from Profoto, two large strip boxes from Buff, a six-foot umbrella, grids for all of those, depending on situation, and three Einsteins and one Alien Bee.

Your brand and business is called My Better Eye, can you explain its origin?

Well, you can imagine that I only have one eye (that works at least), so that’s essentially where it comes from. I am not trying to hide the issues that I have. I know a lot of photographers would rather shy away from it. A lot of clients might say, “well why would I hire someone with issues when I can just hire someone who can see just fine?” It’s a matter of trust. But the way that I structure my client work, or if there’s a new client that’s coming on board, is that I meet them in person for a meeting. Nowadays, I think that’s looked at as a little old-fashioned. But being able to explain the name and my limits and what we can do, um, I think the name adds interest. That, and my last name is nearly impossible to pronounce.

What impact are you hoping to make through your work?

I want people to know that there’s always an alternative to a subject matter. And I think that lighting really does change a photo, more than people think. The one thing I tell people when they’re starting to get into photo is to look at the differences between what your phone can do and what your camera can do. Realistically, it’s not that much. But things you can add to traditional camera are things like lighting. Even one light. Starting small still helps. 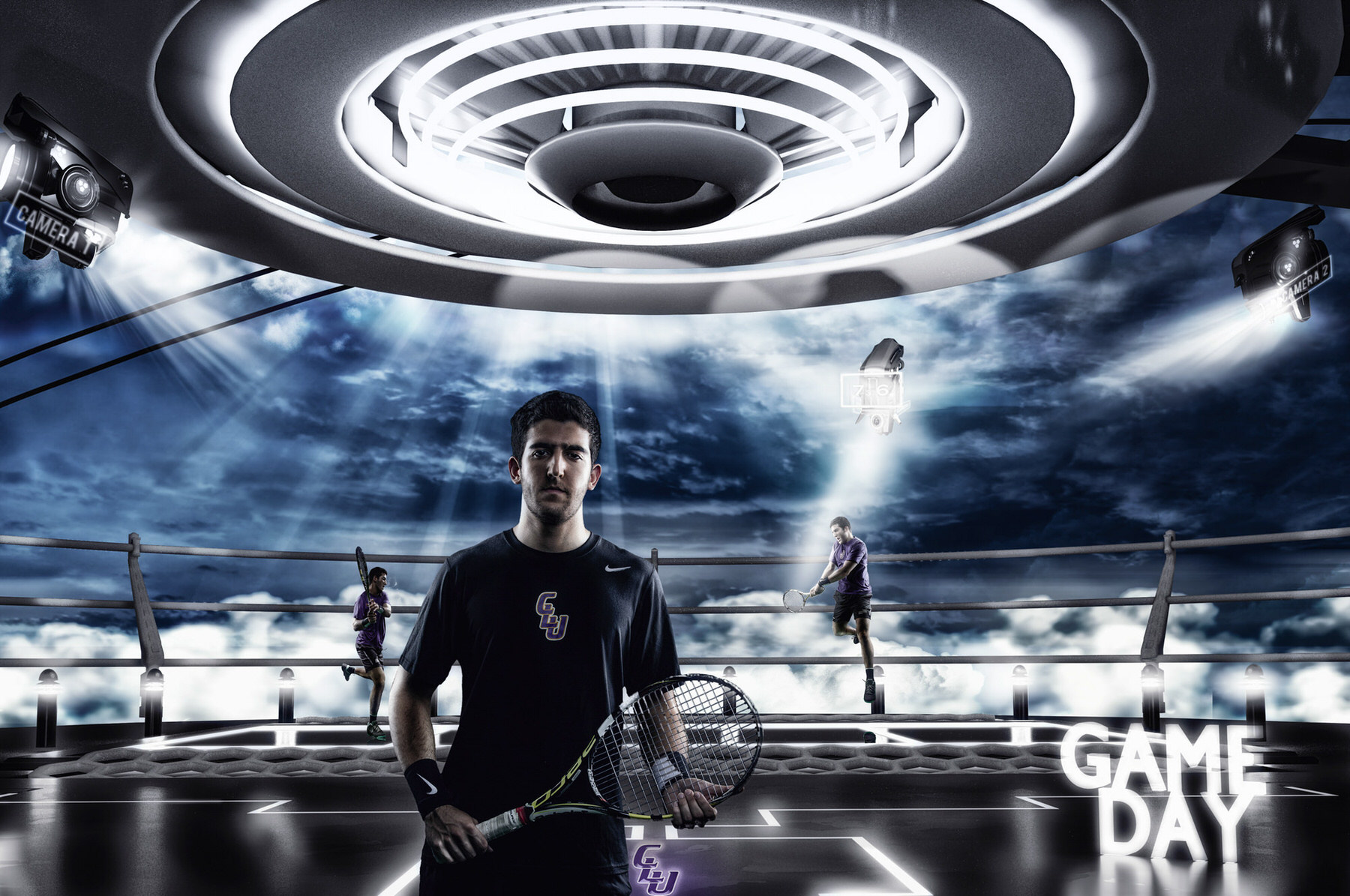 What project is taking most of your time and energy right now? (In addition to also going to school!)

Yeah, I’m almost done. Just one semester to go. I’m actually studying business; it’s not even art-related. Right now I’m trying to build a super, well-rounded portfolio to present to schools and athletic clubs and teams. Different styles of athletics. I’m working with a bunch of athletes from my school. We’re doing things like alternative photos to the very simple, white-background photos for individual athletes and really big banner photos.

If someone attempted to capture you in a single photo, what would be happening in it?

I’ve actually been thinking about this recently because I’ve been wanting to do a self-portrait with some kind of cg element to it. If you could imagine a very simple gradient on a backdrop, say in a studio setting. I’ve always been fascinated with robotics and futuristic, hard-surface modeling. So it’d be me standing there, with one of my arms like a bionic arm, but more stylized, holding a strobe and the other holding my camera.

What’s one of your favorite photos you’ve ever created? Explain why it’s so special to you?

This one was when I was just getting into the groove of compositing. I put the most work into it beforehand and it had the most amount of experimentation in it. I think I re-did it three times over. It took me a month and a half, starting over twice, and then once I finally got it to this point I was so happy with it. It wasn’t everyone else’s favorite, but it was my favorite, and it still is because I know the amount of work and frustration that went into it.

Discover the awesome potential of working in 3D. In our Photoshop 301 Tutorial, you will see, learn and do more advanced techniques to take your work to another level.