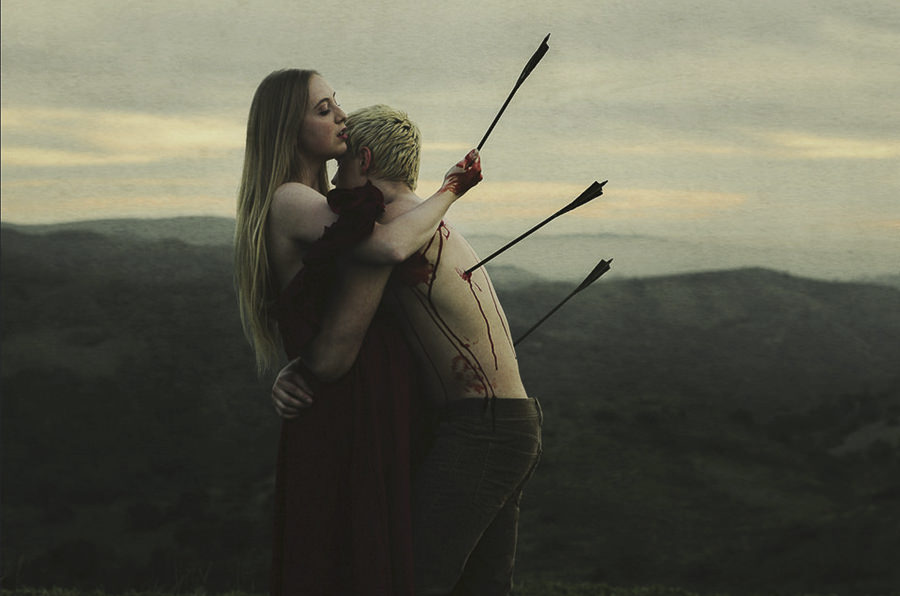 Visual artist and photographer Alex Stoddard focuses on the human form and the process of infusing it with natural surroundings. He also strives to create whimsical and surreal portraits. In our interview with Alex, we talk about doing a 365 project when he was only 16 and how it impacted his life and art. There is a huge improvement in your work from the beginning of your 365 to the work you are making now. How else has that project impacted your life?

I think I changed in most aspects of my life while my 365 was happening. Some of those changes were a direct result of the project and others might just have been normal for a sixteen-year-old kid. The improvement in my photography is probably the most noticeable, but a lot of the transformations were more subtle or only those that I saw myself. I think I became a totally different individual, personality-wise. I spent most of the year that I was engaged in the project by myself, so I had a lot of time to delve into my own mind and really come to know myself. I became comfortable with who I was and the things I couldn’t change, and thus I became more confident and self-assured. I lost a lot of friends but grew much closer with my family, as they became a part of the project themselves at times, assisting or modeling for certain pictures. I learned what I wanted to pursue career-wise and what I was passionate about. Towards the end of a self-portrait project, many photographers grow tired of seeing their own face in every image. Was this something you ever dealt with and if so, how did you overcome it when you wanted to quit?

Well, my 365 wasn’t confined strictly to self-portraits, so I occasionally shot other models when I just wasn’t feeling up to photographing myself. I did feel the urge to quit, though, many times. I put so much energy and time into my photographs in an effort to push myself and grow, and it became very draining… not so much on my will to take the photos, but my mind and the ideas. In those cases I felt like quitting, I would roll around on the floor and scream and kick whatever was nearest me and then pick myself back up and get on with my photo of the day. I always imagined how good it would feel when the project was finally over and I’d completed it that any serious thoughts of quitting always came second.

Many of your images are set in beautiful locations. Do you typically plan out the final shot and find the right place for it or draw inspiration from the place itself?

I will almost always draw inspiration from the place itself. Location is a huge component for me, right up there with the concept and clothing. They all tie in together.

There is definitely a signature look to your photos. Do you have any tips for developing a unique personal style?

Don’t try to rush it. I think you should experiment with all kinds of styles and techniques, both in shooting and post-processing. It me took a long time to develop my own personal style. I just shot and processed each photograph individually and gradually saw what worked for me and what didn’t. I think you should take note of each little aspect you see that attracts you when creating a photo and store that away in your memory for next time, and continue this process until you like everything about every photo you’re producing. It’s inspiring to see someone develop such an amazing portfolio at a young age. Where do you see yourself in 10 years?

Thank you! I realize that my age really shouldn’t matter, but rather my work should be considered on its own, but the fact that I’m only 18 honestly has been really beneficial in attracting attention. If my age is what it takes to be given more opportunities that lead to further growth and the continuation of my photography career, then I don’t mind. In ten years, I’d love to be making a living as a photographer. I want to be artistically fulfilled and working with other creatives and telling stories through my photographs. I’m attracted to shooting editorials and dabbling in fashion and the idea of producing a book.

In just a couple years you’ve had work shown in galleries, published, and worked with a few different clients. What do you feel is your biggest accomplishment and why?

That’s a tough one. It’s hard to judge which I am most proud of, because I feel the same excitement each time I’m given an opportunity. Two weeks ago, two of my pieces were part of a large annual advertising event in Los Angeles called Promax BDA. They were sold as part of a silent auction alongside a few other huge names in the photography industry like Matthew Rolston, Art Streiber, and Jill Greenberg. I was invited to the event and got to “mingle” with them and the heads of FOX, CBS, and ABC. My “mingling” was more like staring at them, wide-eyed and stuttering and blushing, though. It was completely surreal.

What were the positives and negatives of the increasing number of followers as your work became more popular?

The positives were pretty clear all along: an audience to my work, an added reason to push myself even harder to improve and impress. More people following meant more opportunities, more print sales, essentially fueling my career.

The negatives kind of overlap with the positives, in a way. Like I said, knowing people were watching made me want to better myself. That was all well and good, but it eventually got to the point where I was creating for my followers instead of myself. I was taking photographs that I knew would please them instead of pursuing what I was attracted to and what would satisfy my creative needs. Ultimately I managed to take a step back from my work and take a look at what I loved to shoot and what the cost would be if I shot that instead of what I knew people wanted to see.

Were there any struggles you didn’t anticipate when shooting models and client work?

Definitely. When I first starting shooting models and doing client work, I noticed something was different. The photographs weren’t turning out well because I was so nervous and my thoughts became jumbled when shooting. When taking self-portraits, I have all the time I need to sit and concentrate and plan out the perfect angle, lighting situation, and settings. I can take as many photos as I need until I have the perfect shot because I don’t have someone sitting and waiting for me. I don’t feel like I am wasting someone else’s time. It’s kind of like talking on the phone versus sending an email. A person has to be quick with his response on the phone, whereas he could sit for five minutes in front of his computer ensuring that he words his response perfectly. In case you were wondering, I usually don’t answer the phone. Do you plan to continue shooting self-portraits?

Absolutely. At least until I become too old and fat to do so. Part of why I love photography so much is actually the modeling aspect. I enjoy being a part of the scene, playing a character, portraying emotions that are often so alien to me. I think my best work is my self-portraiture. What would your advice be to someone interested in starting a 365?

I’d say define to yourself very early on want you want to get out of it. Is it growth you seek, or simply a documentation of your life over a year? This will decide how much effort you need to put into creating each day’s photos. If you want to get better, you will need to push yourself outside of your comfort zone. You’ll need to do the things that scare you and then go beyond them. You should start immediately and be prepared for frustration, but always keep the end goal in mind.