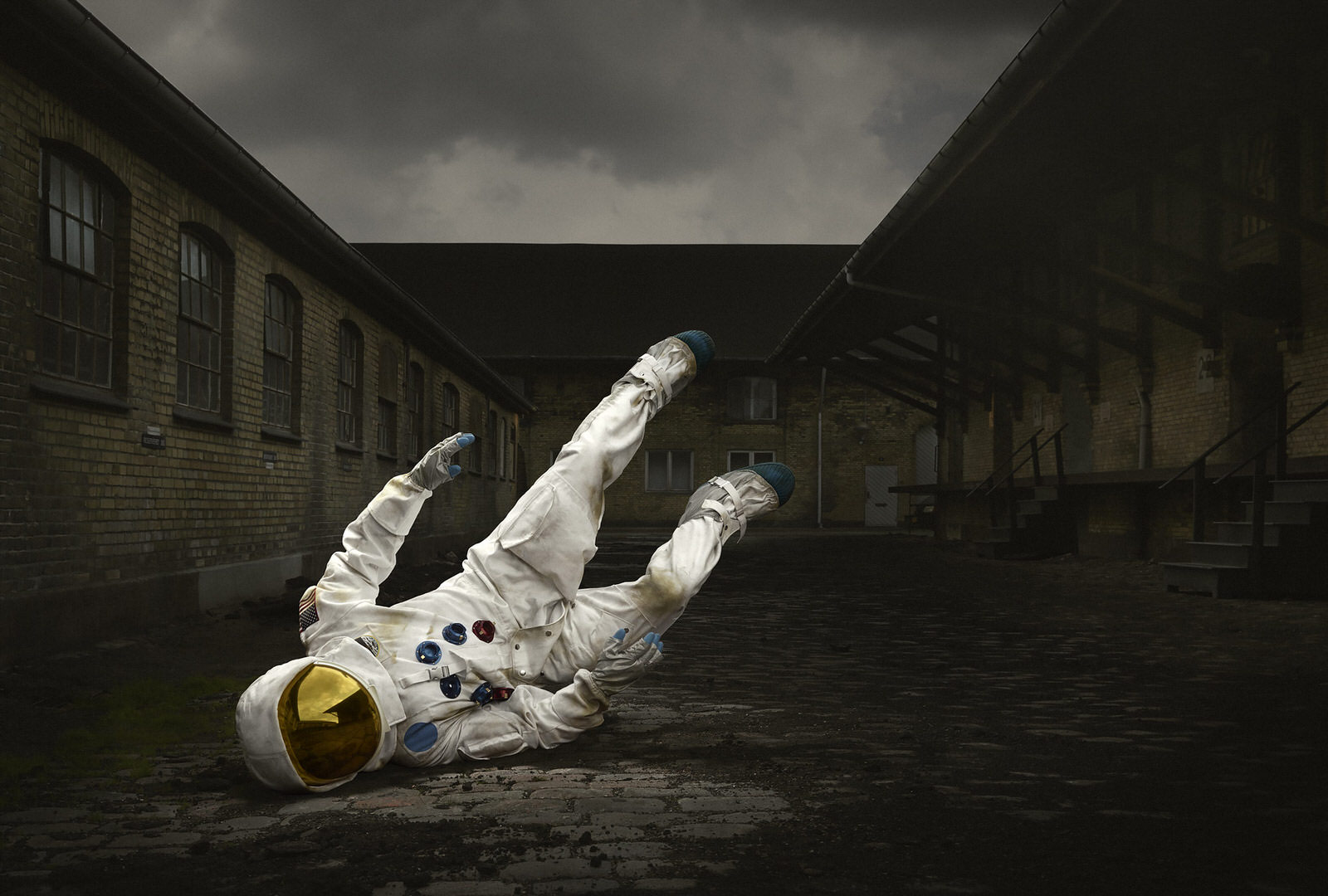 Copenhagen-based freelance advertising photographer Ken Hermann aims to create beautiful artwork that makes people think – and with his project, Crash Landed, he’s been able to do exactly that.

The series depicts an astronaut returning to Earth, trying to readapt to everyday life. While the images are whimsical and surreal, they also evoke a very human feeling of isolation. To achieve this specific look, Ken invested a significant amount of time planning each aspect of the shoots. 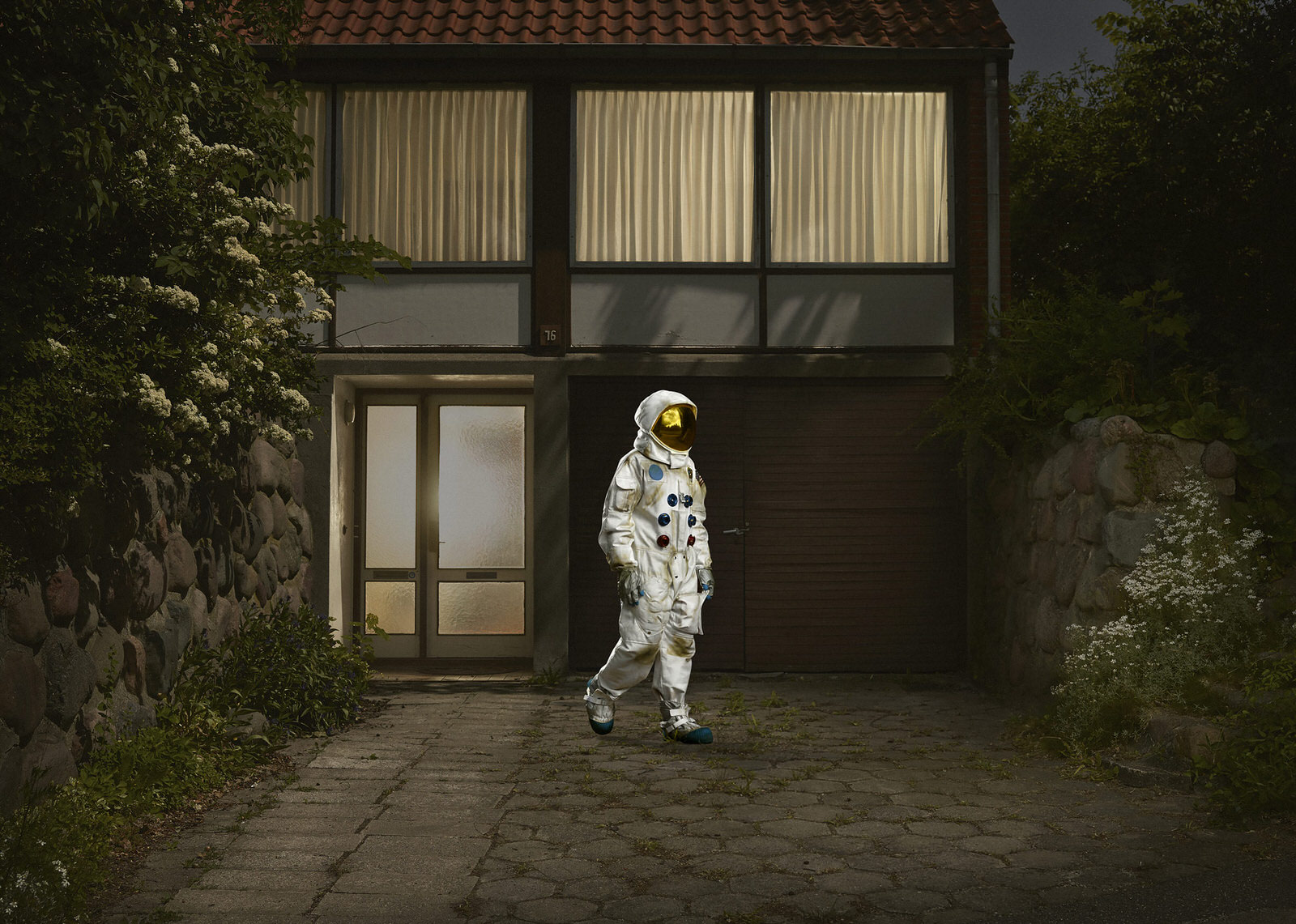 “The idea was to make him look like he just (crash) landed from his spaceship,” Ken says. “We spent the first couple of hours setting up the light and getting the model/spaceman in the right position.”

The setting for each shot was carefully scouted ahead of time, chosen to combine with cinematic lighting to build the particular environment Ken was hoping to capture. For the initial landing shot, Ken decided to have his astronaut fall back to Earth in a gritty, industrial area. 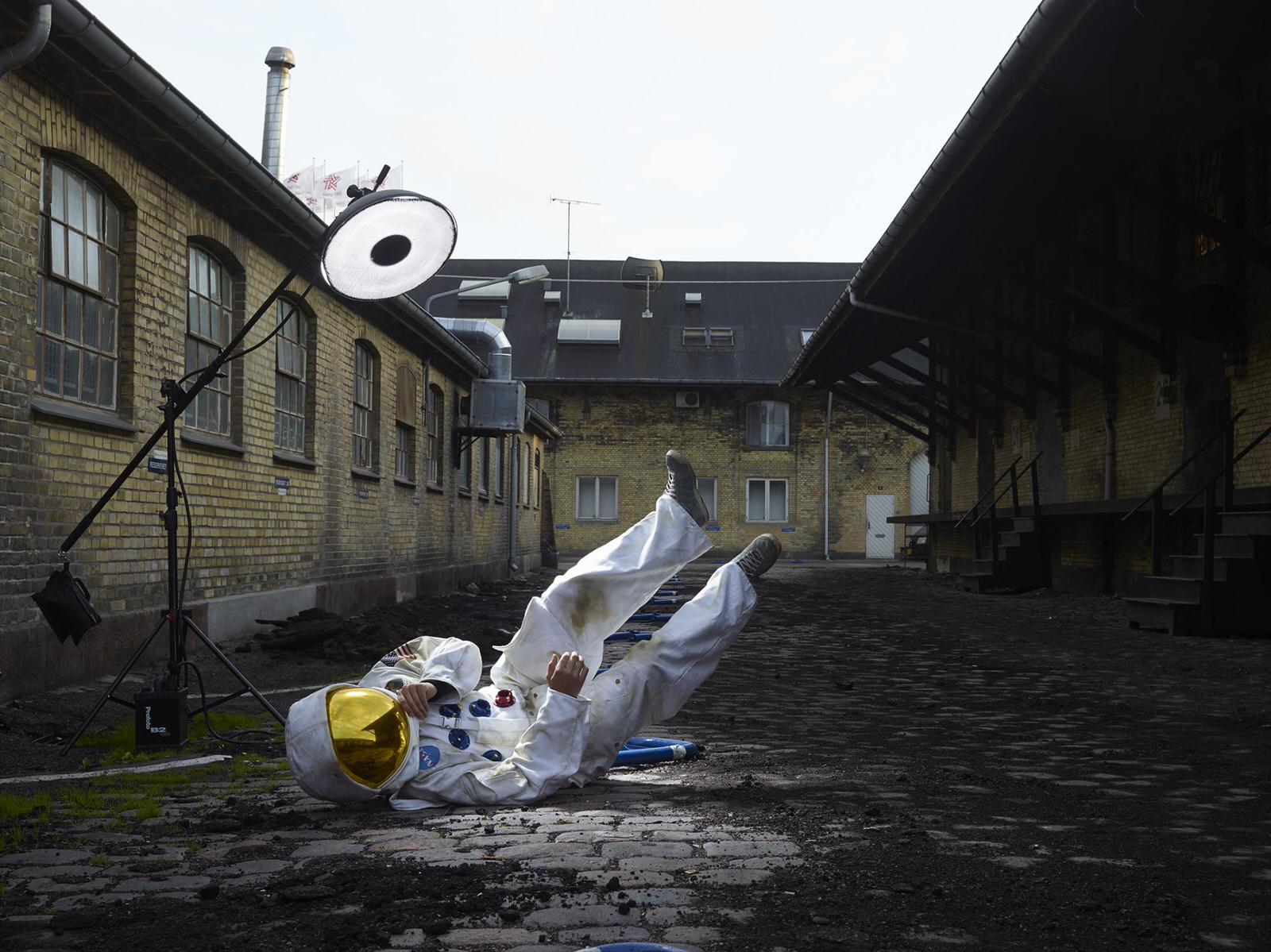 “The location is the old part of the meat packing district in Copenhagen, which was a perfect fit with this kind of old alleyway feel to it,” he says. “I wanted it to be timeless and avoid cars, bikes, and stuff that would give too much away.”

Using a Phase One +45 medium format camera and lighting provided by Broncolor, Ken set about capturing his astronaut’s arrival back on his home planet. Using artificial lighting combined with the natural light already available in the space allowed Ken to create the otherworldly, dreamlike atmosphere of the series – which he shot with a Schneider LS 55mm f/2.8 lens, set to an aperture of f/8, ISO50, and shutter speed of 1/60.

The final image, however, is a composite of several shots. Ken used Capture One to convert the RAW files, and did his post-processing work using Adobe Photoshop.

“First, I was creating the perfect light on the spaceman, and then creating the environment after,” Ken says. “On the actual shooting day, there was a big, red van parked in the location, so we had to come back a few days later to shoot the background, and combine everything in post.” 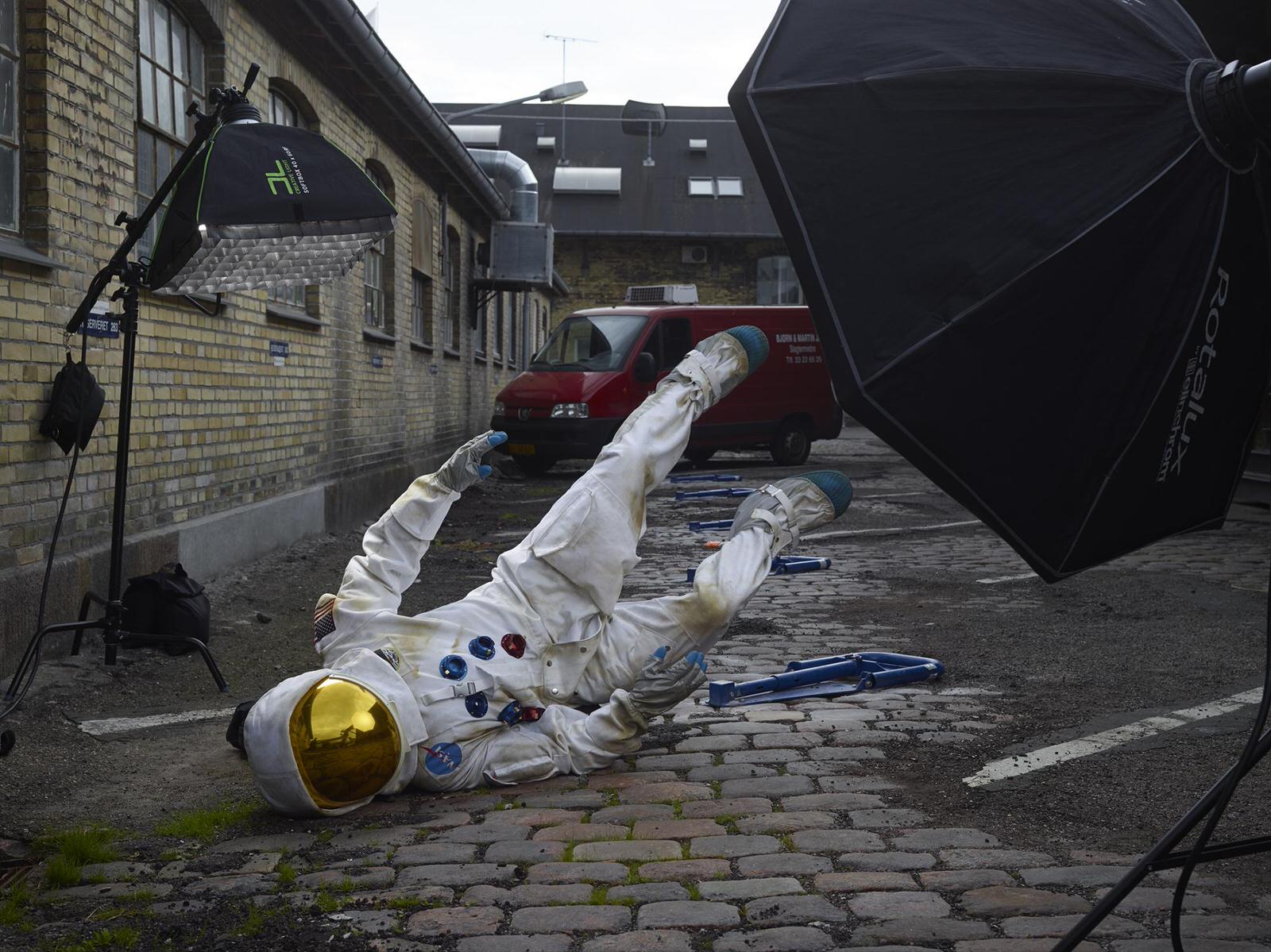 The end result is a dramatic image that showcases the rough transition the astronaut experiences as he crashes back down to Earth – both physically and mentally. Ken’s approach to photography typically sees him weaving cultural and political content into his artistic compositions, and the Crash Landed project is no different.

“For me, it’s very important that the look is very atmospheric and cinematic, and looks professional,” Ken says. “I want to create beautiful images, but also something that wakes people’s curiosity and makes them think.” 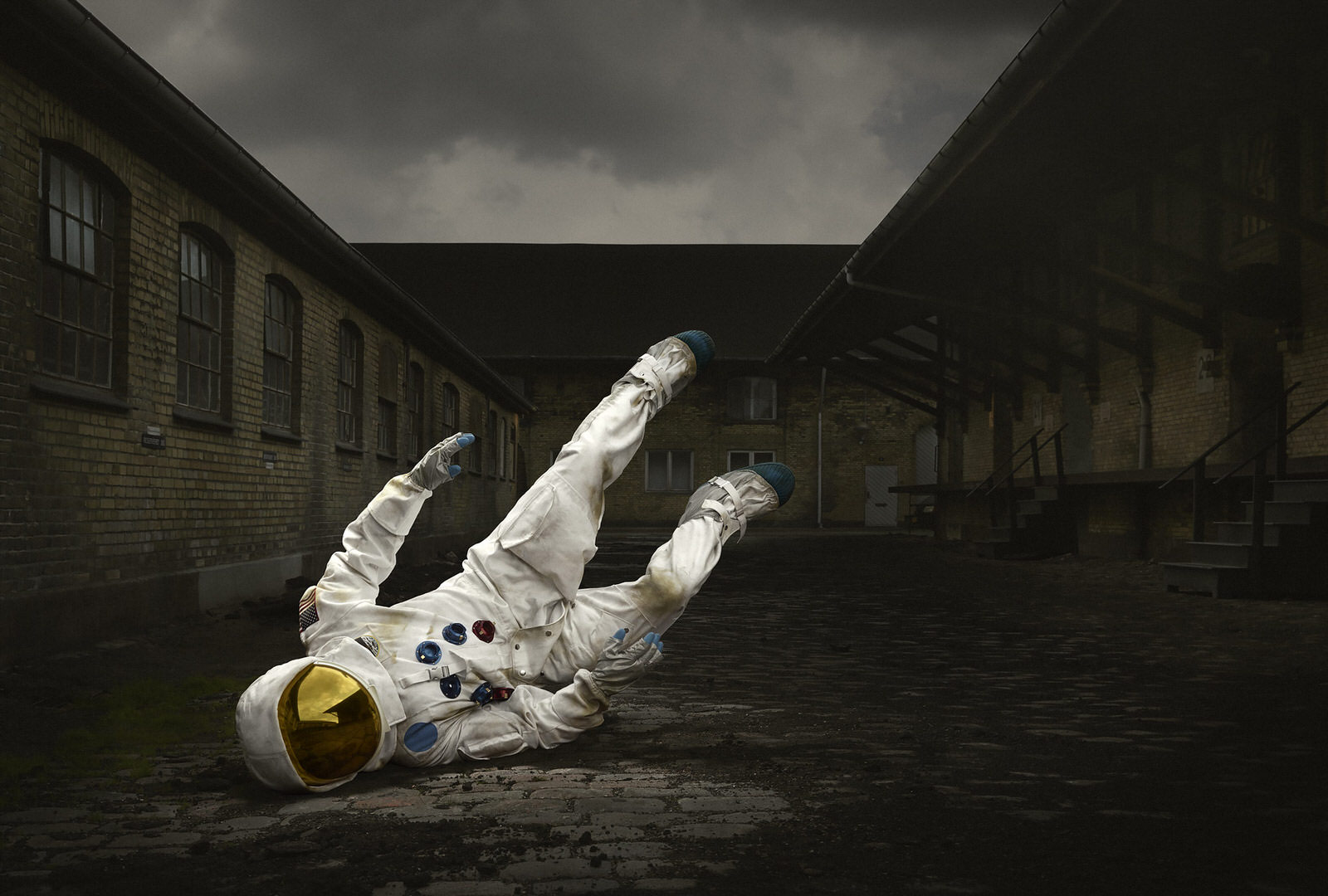 Ken’s photography explores the connections between people and their environment, portraying everyday life through filters of imagination and creativity. To see more of his work, visit his website or Instagram.