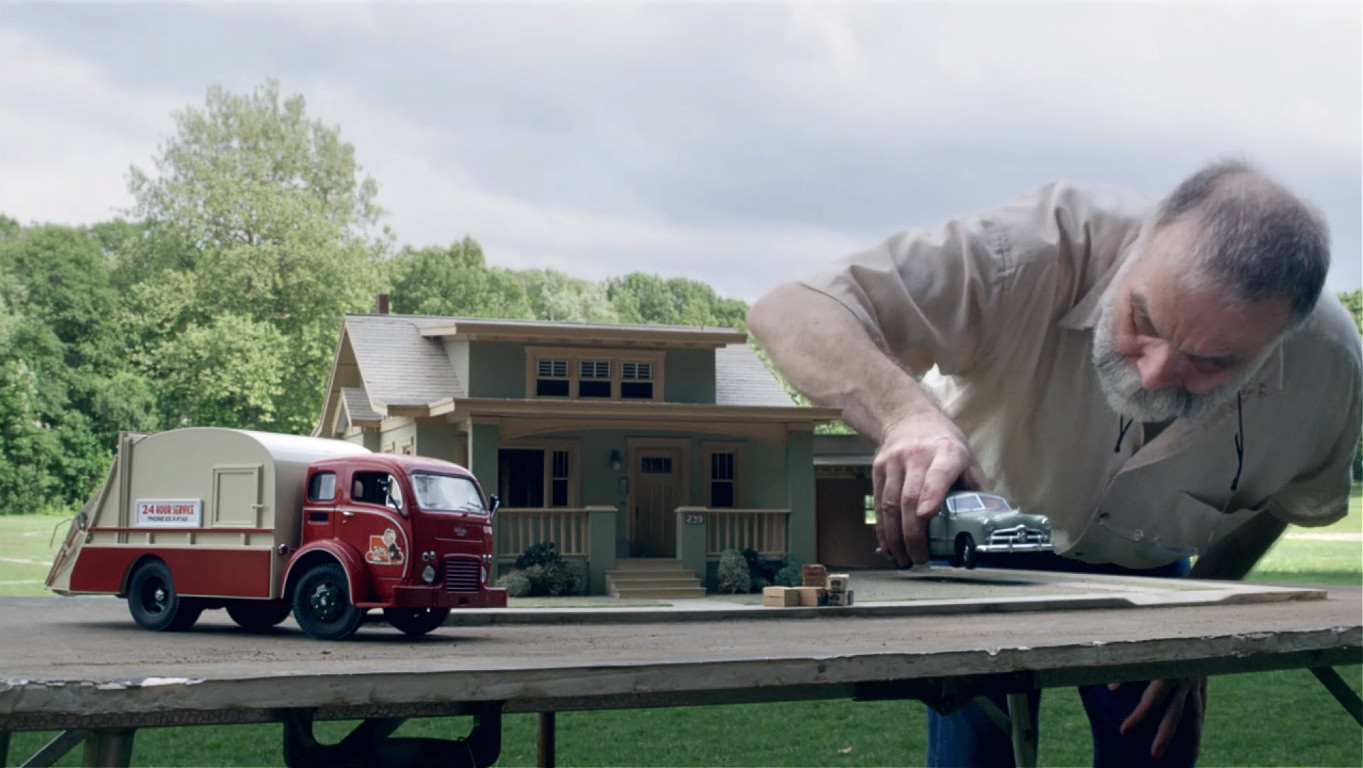 A few years ago, Michael Paul Smith’s Elgin Park photos became a massive hit on Flickr, earning him recognition from industry-leading publications and websites who began lining up to interview him and feature his work.

Elgin Park is a wholesome mid-20th century American town. The quintessential small town where kids ride bikes down tree-lined streets, teens meet at the diner after school for milkshakes, where there’s still a milkman, a bagboy at the local grocer, a cinema in the town center. It is the town where many of us remember growing up, and one that we long for today. 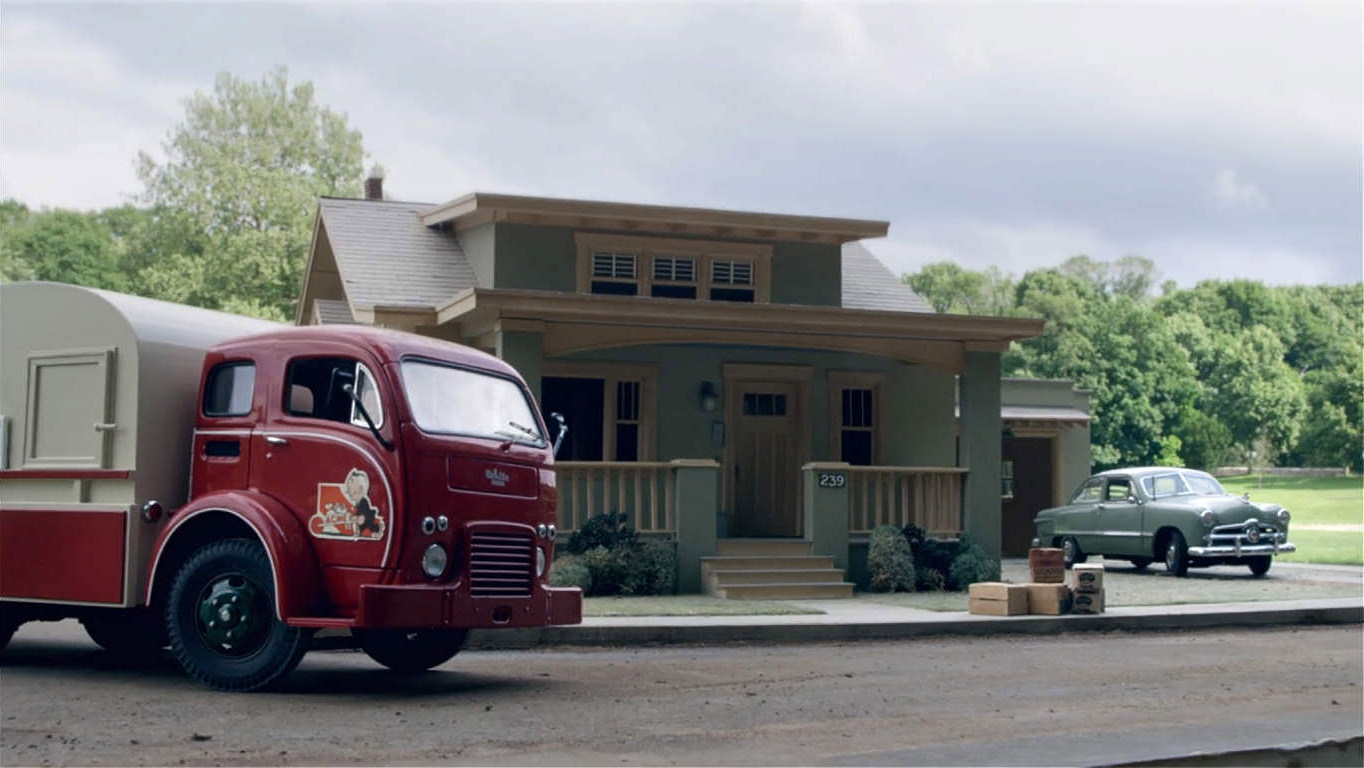 But, it is all made up. A 1/24th-scale recreation of American life between the 1920s and 1960s. To bring Elgin Park to life, Michael uses his collection of over 300 diecast model cars and trucks that he has been collecting for over two decades. He builds the homes, shops and other props using Gator Board, styrene plastic and basswood.

Then he sets off with his hand-made sets in tow to find natural settings around his neighborhood to use as backdrops. With just a Canon SX280 camera, he shoots at angles that enhance forced perception so the scenes look natural and real.

And while his images show a way of life that has long passed and that have brought some of his viewers to tears as they remember that time fondly, Michael doesn’t see them as nostalgic.

My photographs are not about nostalgia. Nostalgia to me seems a little musty, something, you know, left in a shoebox. I see my work as visual memories. Not quite exactly how it might have been but there is a force in the photographs that go, “Oh yes, I remember that!”

All of Michael’s Elgin Park images are composed in camera; he doesn’t use Photoshop to digitally manipulate them in any way. The very minimal post-production he does consists of slighting desaturating the color or adding a tint to the final image, or maybe removing a person in the background.

While he began shooting on a little 6-megapixel point and shoot, he eventually upgraded to the 14-megapixel Canon SX280, which he sets to automatic mode and composes the scenes on the viewing screen. 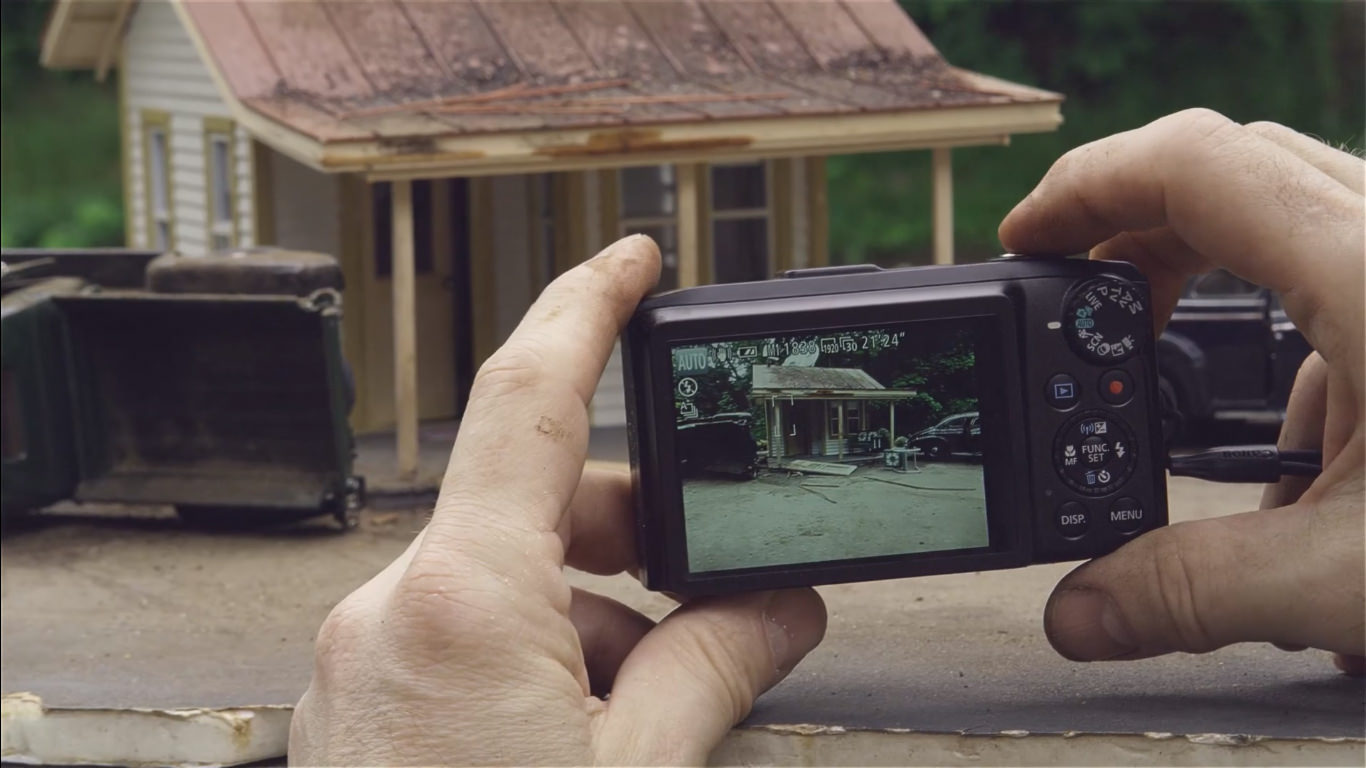 As Michael explained in an interview with Fstoppers, “What I have found is that 14 megapixels is almost too much for what I need to take convincing diorama shots. There is too much information being recorded which makes every little detail show up in the photographs. When working with miniatures, at least for myself, too much detail distracts from the total scene. Also, to capture a “retro” feeling, there needs to be a blur of sorts. If you go through old photos there is a slight lack of clarity to them. I think psychologically it gives them some emotional distance.”

As for how he constructs the models in his scenes, Michael uses resin-coated paper, styrene plastic and basswood, plus any other found objects he thinks might look good. 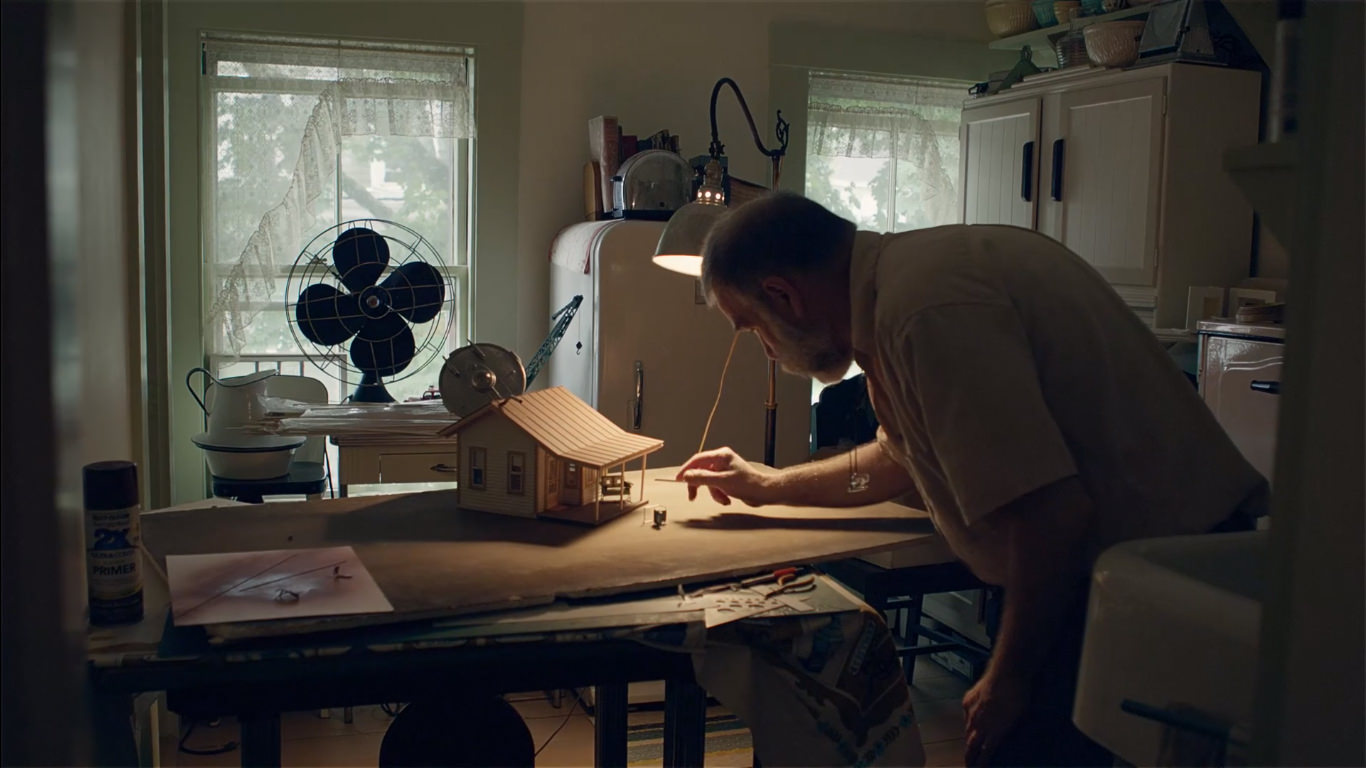 To craft everything, he’ll use a number of tools, including X-acto knives, sanding blocks, rulers, paper, super glue, and paint. To add in elements like snow or rain, Michael uses baking soda or mists water by lightly spraying it over the set.

Since he doesn’t have a car, Michael can often be found towing a luggage cart all over town. On it, he carts a folding table, his model base, boxes of model cars and buildings, and any supplies he needs. 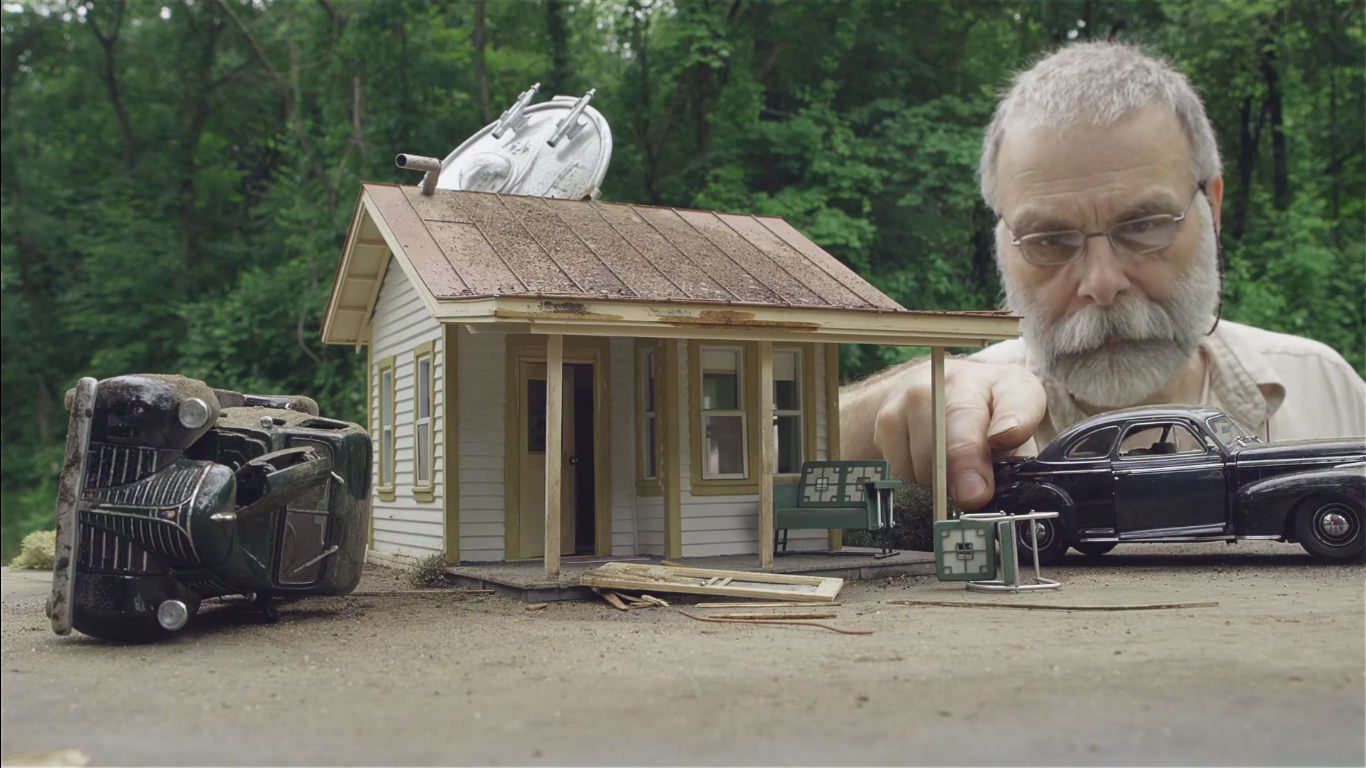 This short film by documentary director and producer Danny Yourd of Animal provides an intimate look into the artist’s process and life. It has some great behind-the-scenes shots so it’s definitely worth checking out:

“For a long time, I never showed my photographs to anyone,” Michael said in a 2013 Flickr blog post. “I just thought people wouldn’t get it. Seemed kinda quirky to me, you know? Here’s a grown man with little model cars and buildings that he’s creating. But after a couple years, stuff was just languishing on my computer. It was brought to my attention that Flickr existed, and so I posted them, and within a couple months, there were about one million hits. It’s unreal.”

The response to his project has been absolutely incredible. Michael has released two books of his work, “Elgin Park: An Ideal American Town” and “ELGIN PARK: Visual Memories of Midcentury America at 1/24th Scale.” He continues to recreate historic, mid-20th century Americana and his scenes just keep getting better! You can keep up with the project and Michael’s work on his Flickr page.