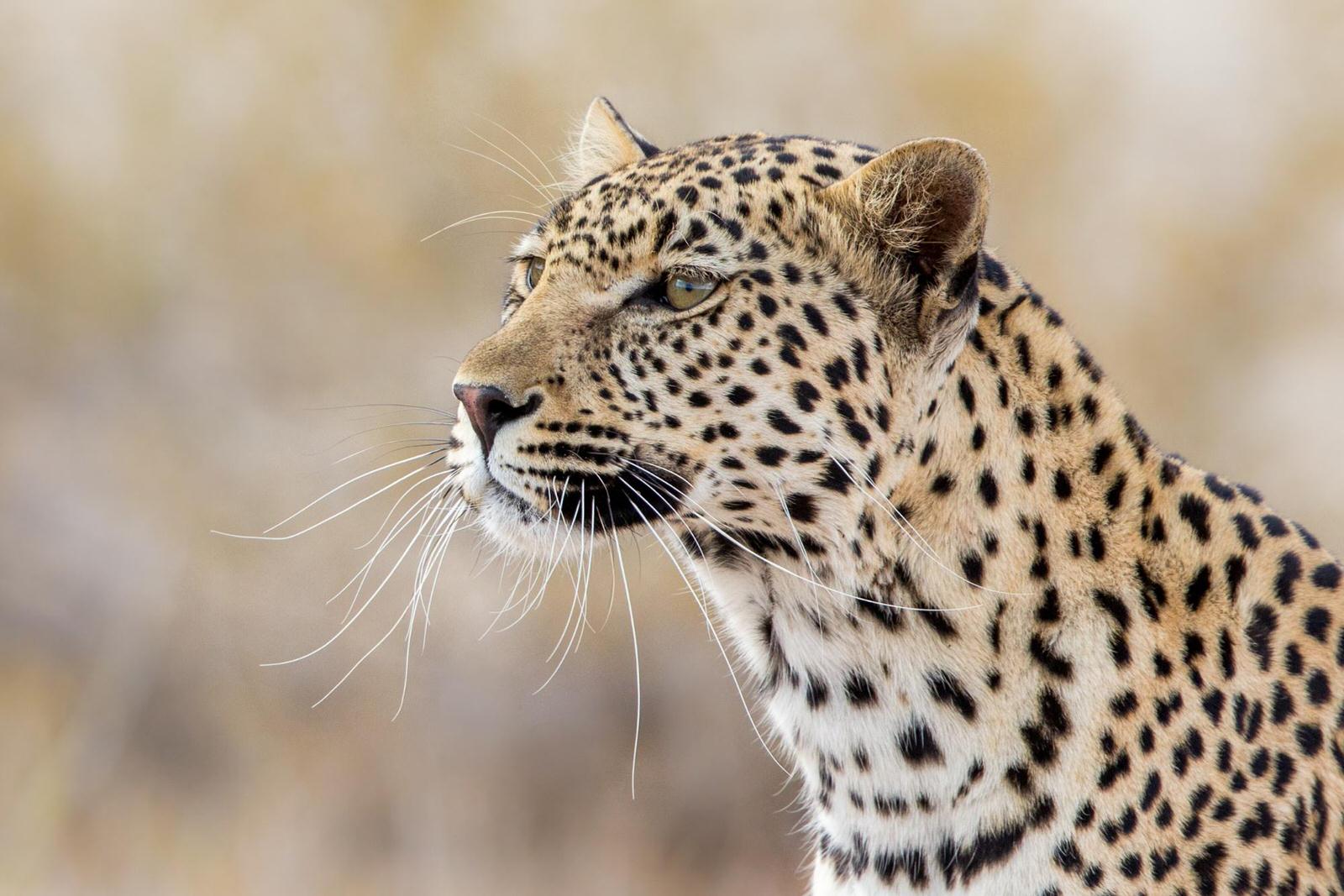 When hobbyist wildlife photographer Gerda van Schalkwyk first visited the Kgalagadi Transfrontier Park in 1992, she wasn’t there to take pictures. With no photographic equipment on hand, Gerda and her husband, Willie, took in the vastness of the semi-arid, sand-filled basin and found the “long stretches of nothingness” appealing.

Since then, the South African couple have been visiting the park regularly, particularly on the South African side. According to Gerda, Kgalagadi (jointly managed by South Africa and Botswana) forms one of the largest national park systems in the world – at nearly 15,000 square miles, it offers an expansive ecosystem relatively free of human interference. 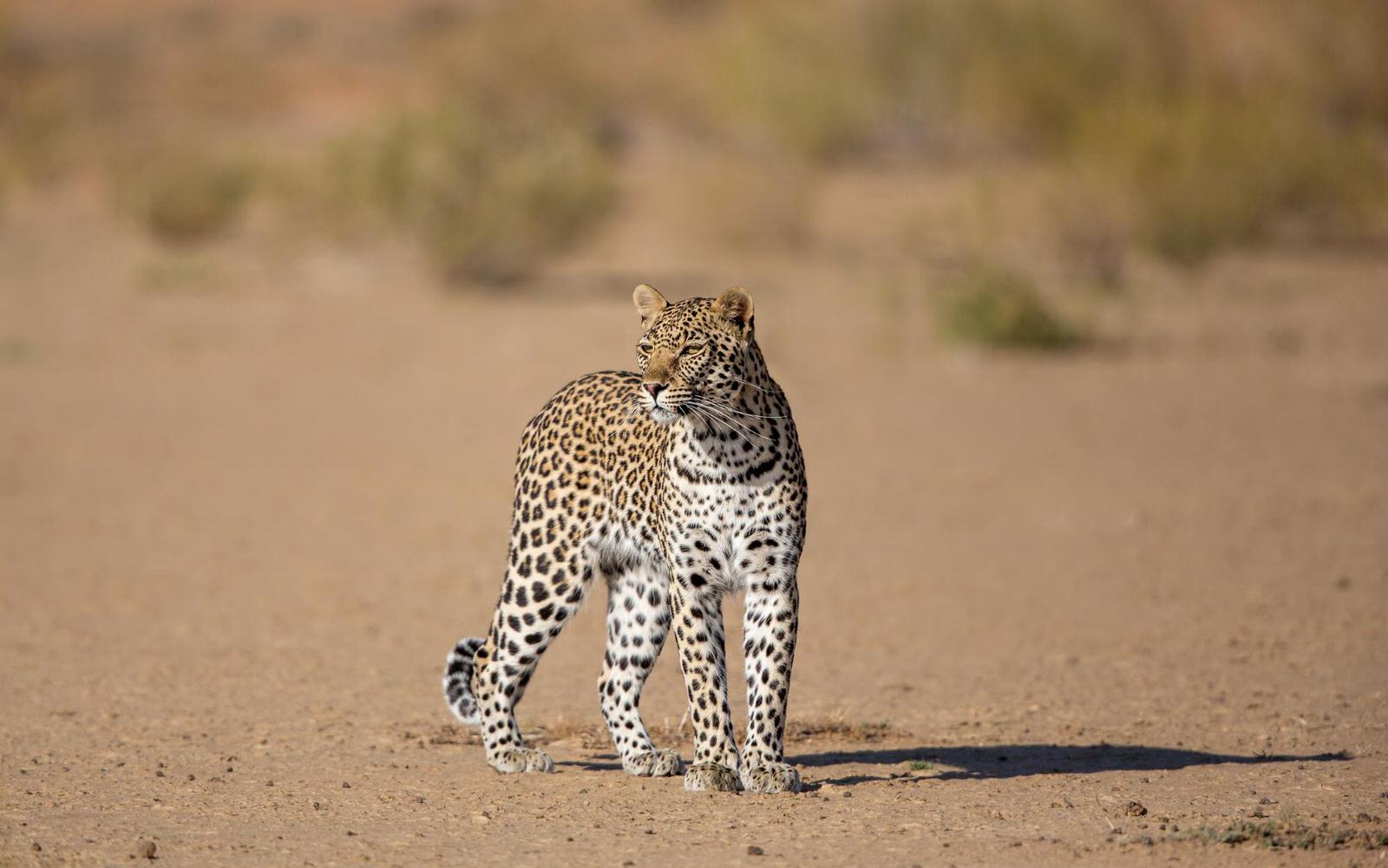 “Kgalagadi is a self-drive destination, and much of its allure lies in uncertainty and anticipation,” says Gerda. “No one knows what awaits at the next watering hole, or around the next bend in the road. Nature has her own pace, and Kgalagadi’s wildlife will reveal itself to the patient visitor when and where it chooses.”

On the last day of a 14-day visit in February 2015, Gerda and Willie were traveling down one of the park’s limited tourist roads, which follows along the ancient riverbed of the Nossob. Gerda was in a “state of resignation,” she admits – certain that she wouldn’t be seeing any leopard that year.

“Leopards are the holy grail of the Kgalagadi,” she says. “Although not uncommon, they are the least-frequently seen of the big cats of the park.”

However, they were running behind that morning. Gerda had misplaced her glasses, resulting in their departure from the camp being much later than usual. And this time, when they approached the Leeuwdril watering hole along the tourist road, she spotted movement in the shade of a large tree close to the water. 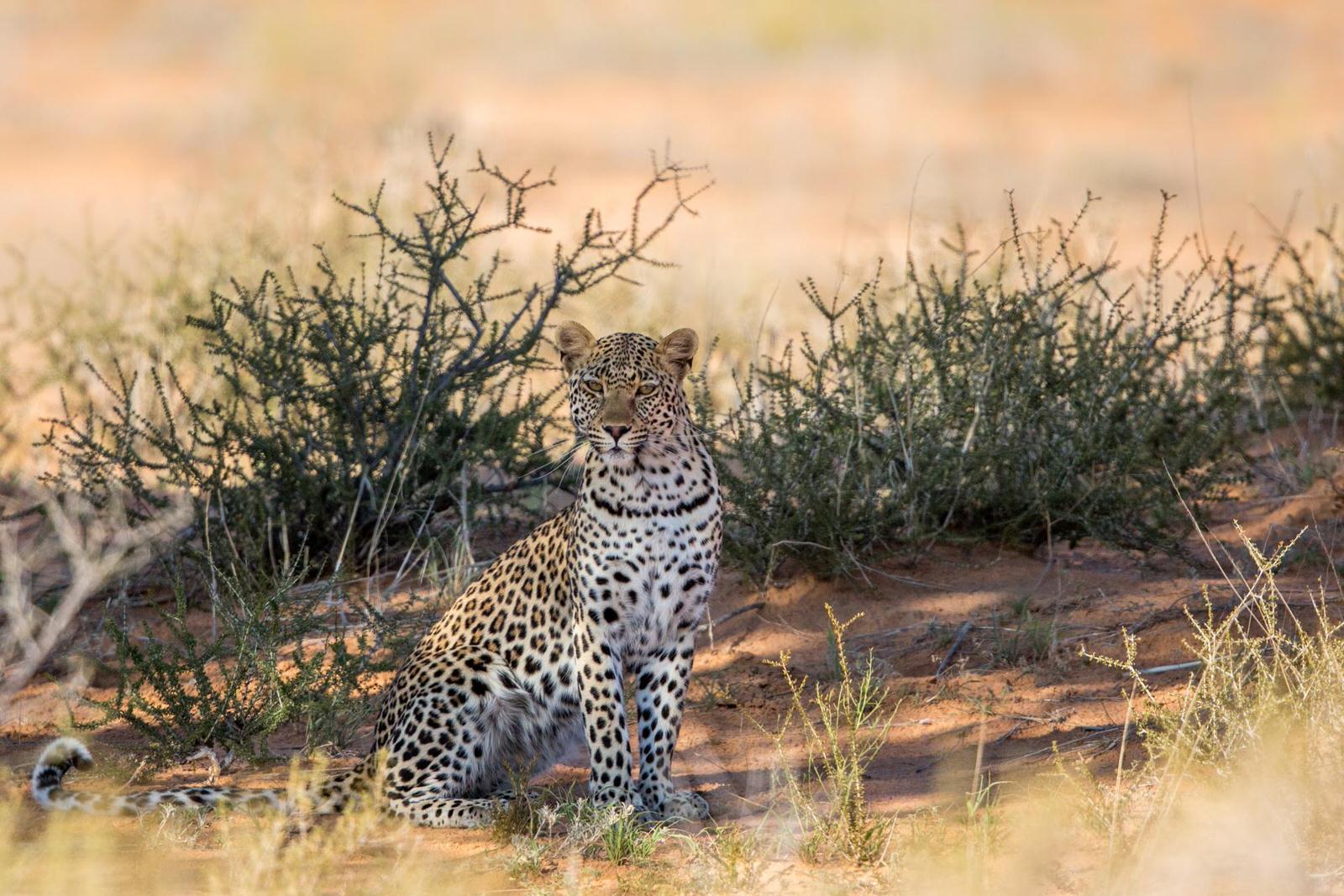 “This beautiful lady does things her way – she did not drink from the water trough, she jumped up onto the holding tank and quenched her thirst from the dam,” Gerda says.

Gerda and her husband spent the next two hours following the leopard and photographing her as the elegant animal spent her morning on the dunes, until she found a large camelthorn tree and positioned herself on a low-hanging branch. It was clear to Gerda that she intended to remain there for the rest of the day.

“She marked her territory, she rested in the shade of trees, she stalked ground squirrels, and, at times, she disappeared behind vegetation and low dunes, while we waited anxiously to see if she would appear again,” Gerda says. “Wildlife photography is for patient people.” 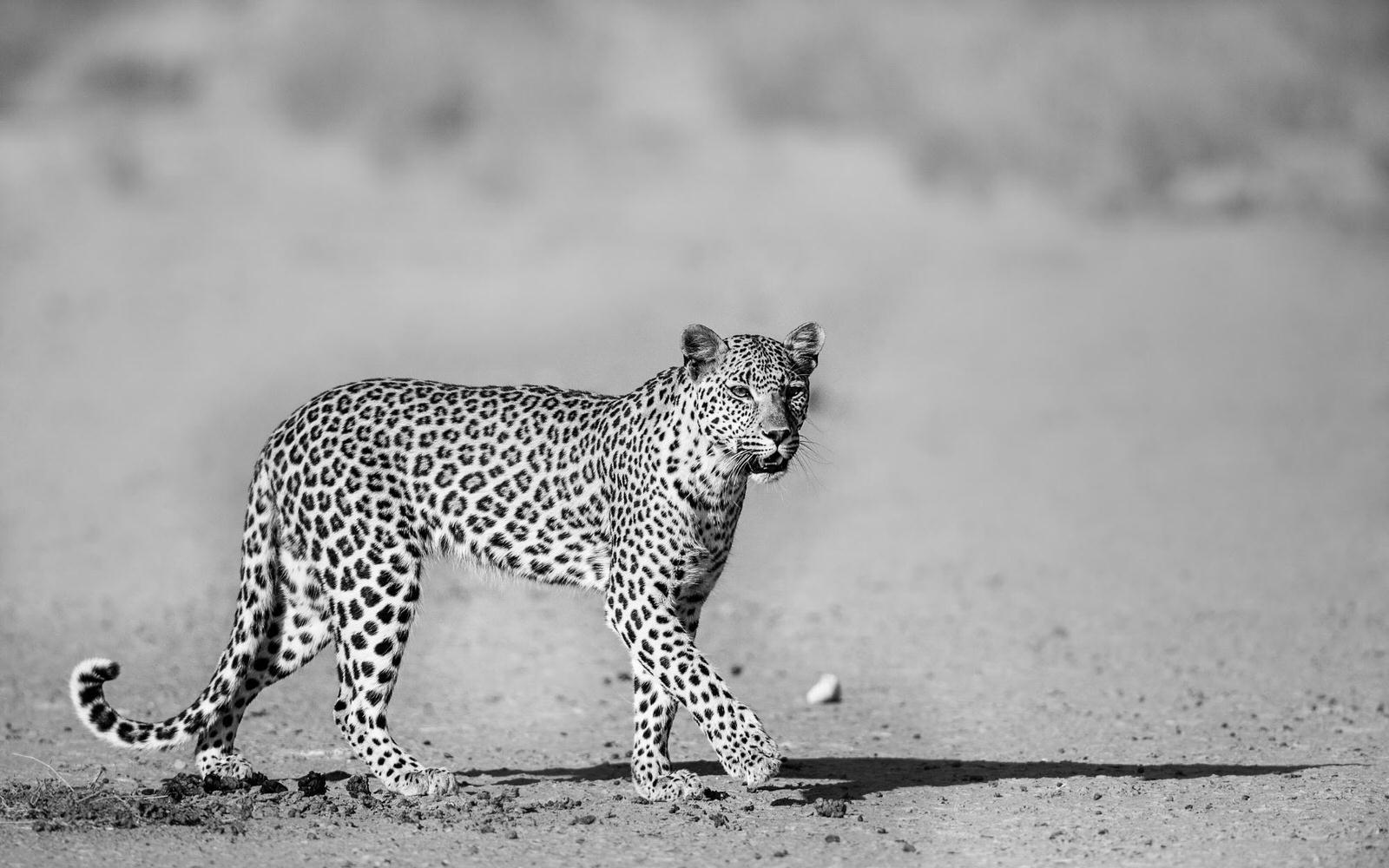 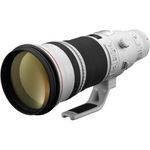 Unable to leave the vehicle, Gerda got creative in her efforts to capture the leopard as she came within 50 yards of the road. Using a Canon 5D Mark III with a Canon 500mm f/4 and a +1.4x converter, Gerda shot at f/5.6 with a shutter speed of 1/8000 and her ISO set at 500 – with beanbag support on a rolled-down window. 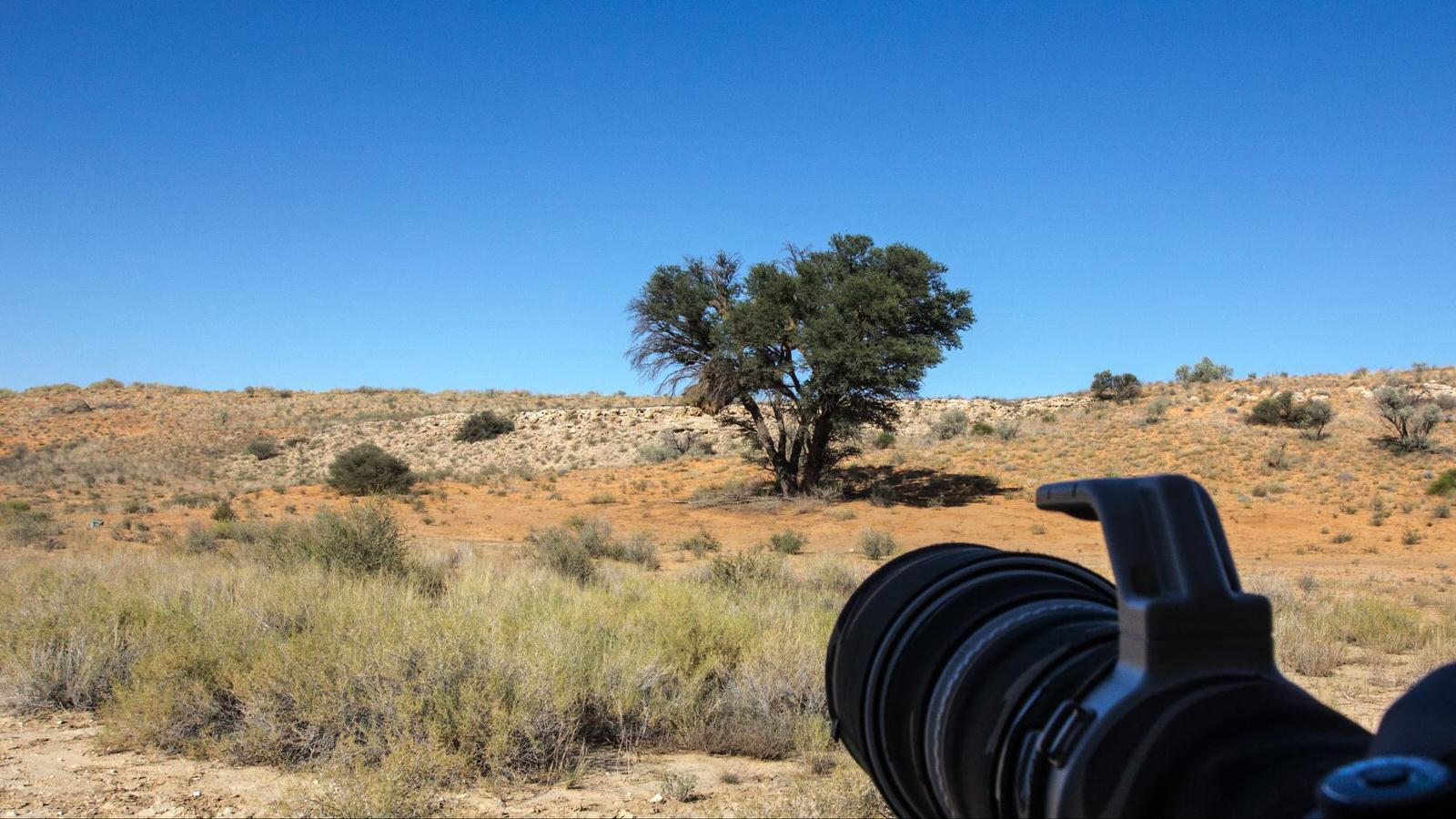 The bright sunlight was slightly behind the leopard, Gerda says, casting her shadow in line with her body. In post-processing, Gerda decided on a black and white conversion to play up the contrast – and showcase the leopard’s gorgeous patterned fur against the stark, sandy background.

That afternoon, Gerda and Willie drove by the tree where they’d last seen the leopard on their way home. 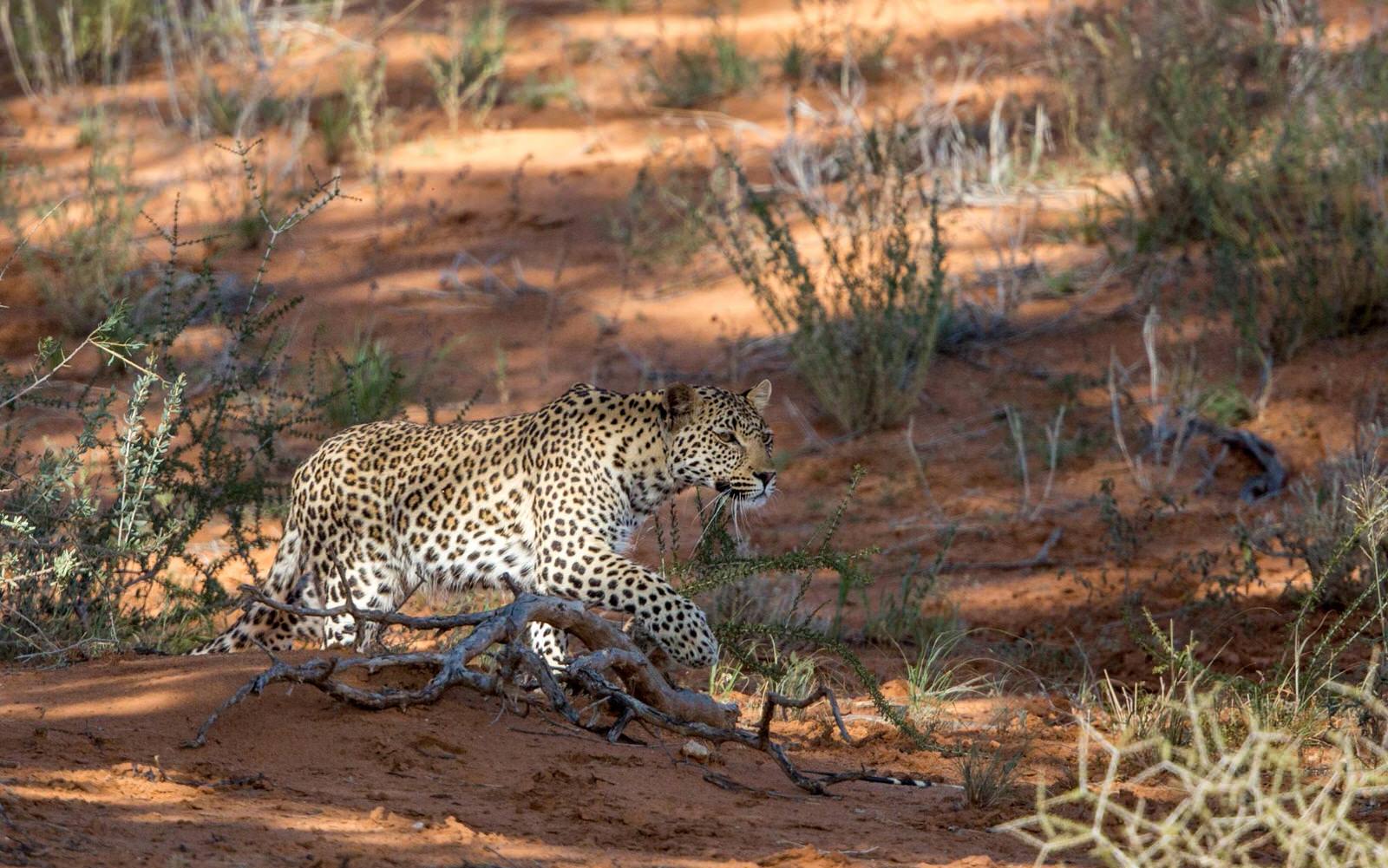 “We were lucky; she was just waking up from the day’s slumber,” Gerda says. “Again, we watched and followed as she started walking toward three ostriches up the dune, but then lost her as she stalked them over the crest of the dune and out of sight. A wonderful end to our annual two weeks in this magical place.”

Gerda’s Flickr stream offers an intriguing look into life in the Kalahari for a wide range of feathered and furry creatures – and will likely continue to grow as she continues adventuring through the Kgalagadi each winter. More South African wildlife can be seen on her husband Willie’s Flickr page, as well.