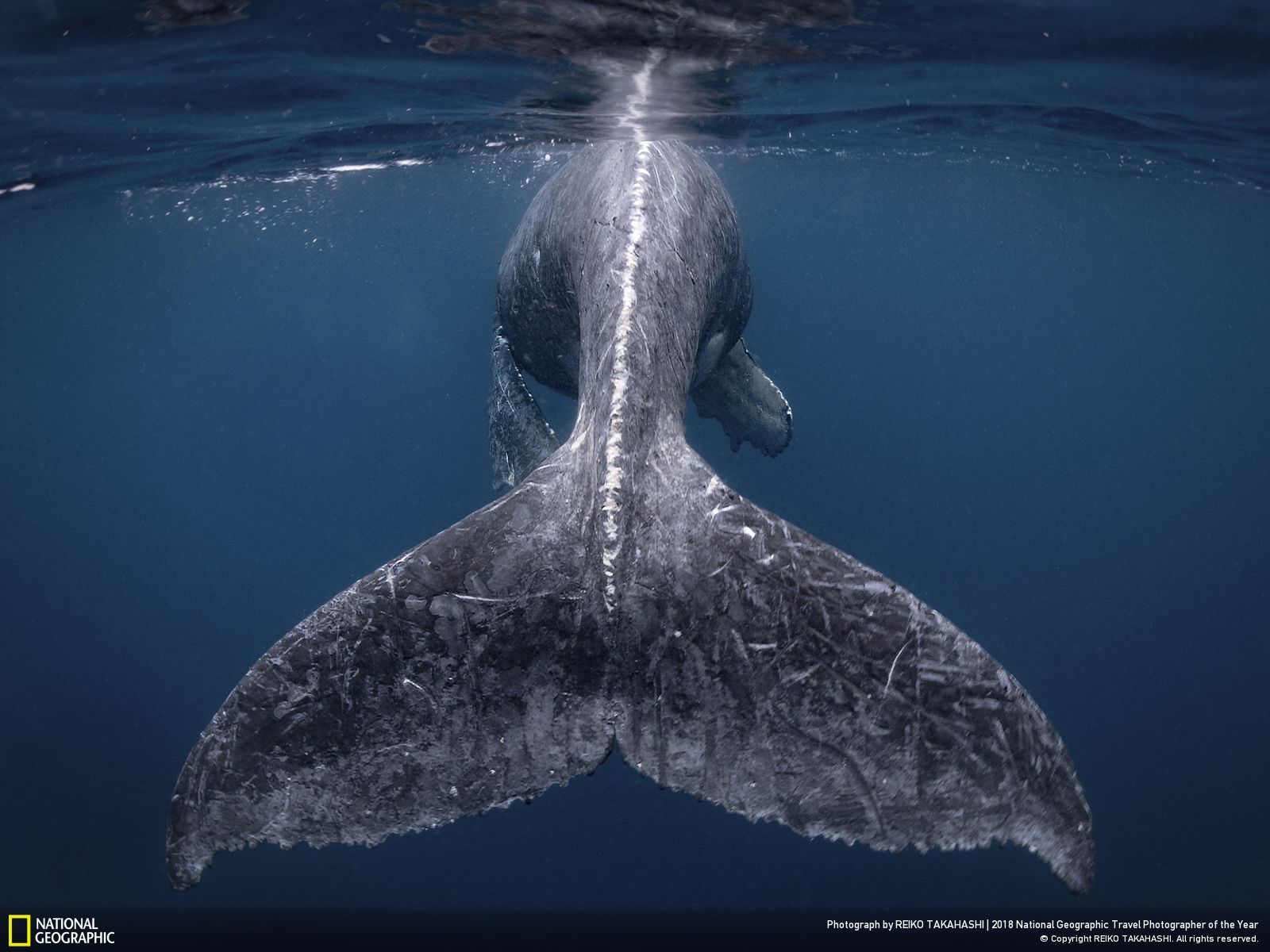 The winners of National Geographic’s 2018 Travel Photographer of the Year Contest have been announced and the photos are absolutely awesome. Of the impressive 13,000 entries this year, the judges spent months pouring over inspiring images from around the globe to choose the winners.

Taking 1st Place in the Nature category and the $10,000 Grand Prize of the competition was Reiko Takahashi, whose image “Mermaid” beautifully features a humpback whale calf near Japan’s Kumejima Island.

You can see all entries across three categories – Nature, Cities, and People – on the National Geographic contest entries page. Here are the winning photographers in each category, plus the People’s Choice selections. 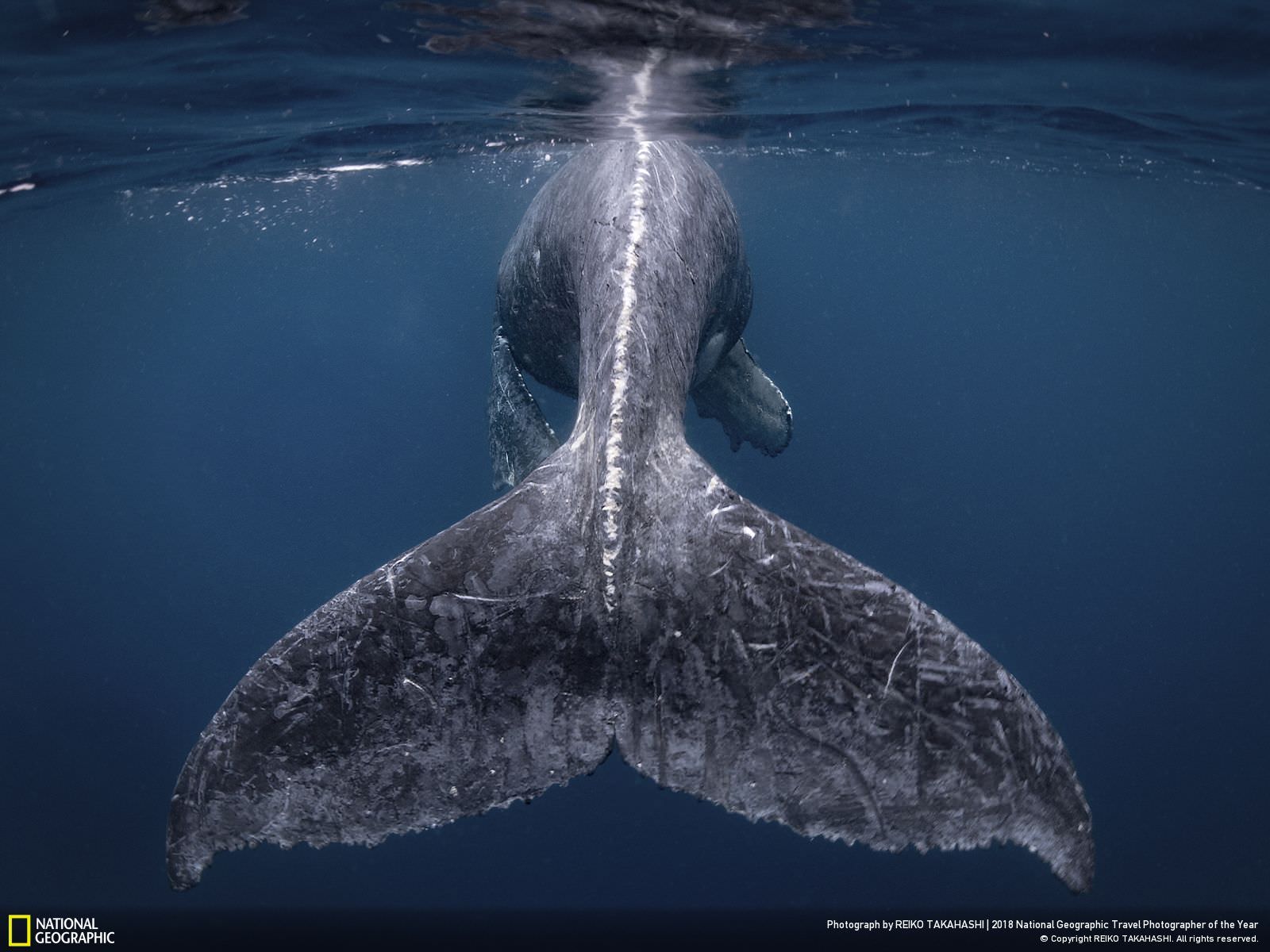 © Reiko Takahashi – I was fortunate to have encountered a humpback whale with her calf on my first day snorkeling near Japan’s Kumejima Island. Most of the time, the calf stayed close to her mom. At one point, the calf began jumping and tapping its tail on the water near us—it was very friendly and curious. Finally, the mother, who was watching nearby, came to pick up the calf and swim away. I fell in love completely with the calf and its very energetic, large, and beautiful tail. 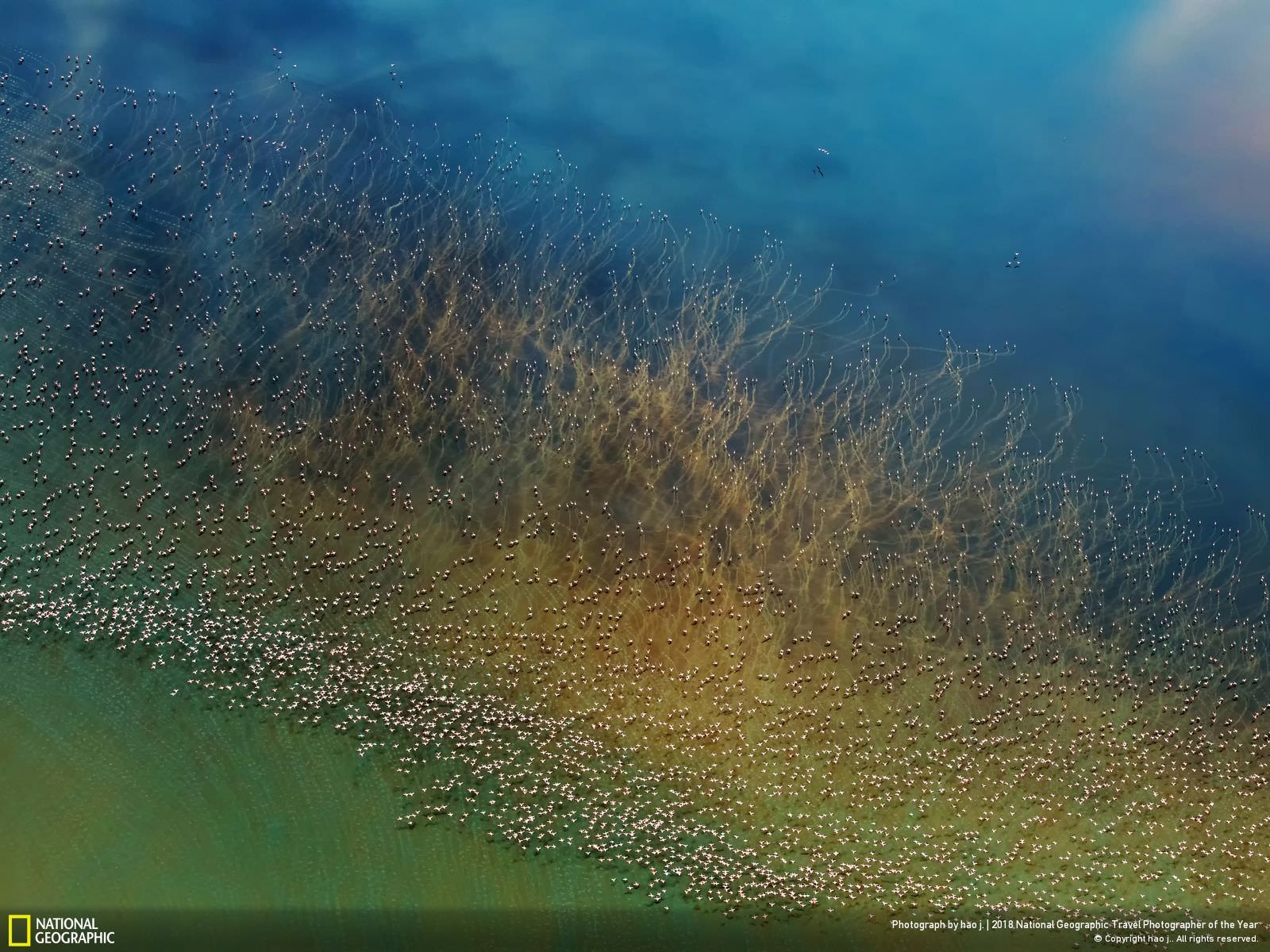 © Hao J. – Thousands of flamingos are seen taking off from the colorful Lake Natron in Tanzania. Before taking off, flamingos need to take a short run on water to build up some speed. At that moment, their long, red legs create a series of water ripples on the surface of the lake. Looking down from the helicopter, these ripple lines look like giant aquatic plants flowing in the water. This photo was taken from a helicopter. 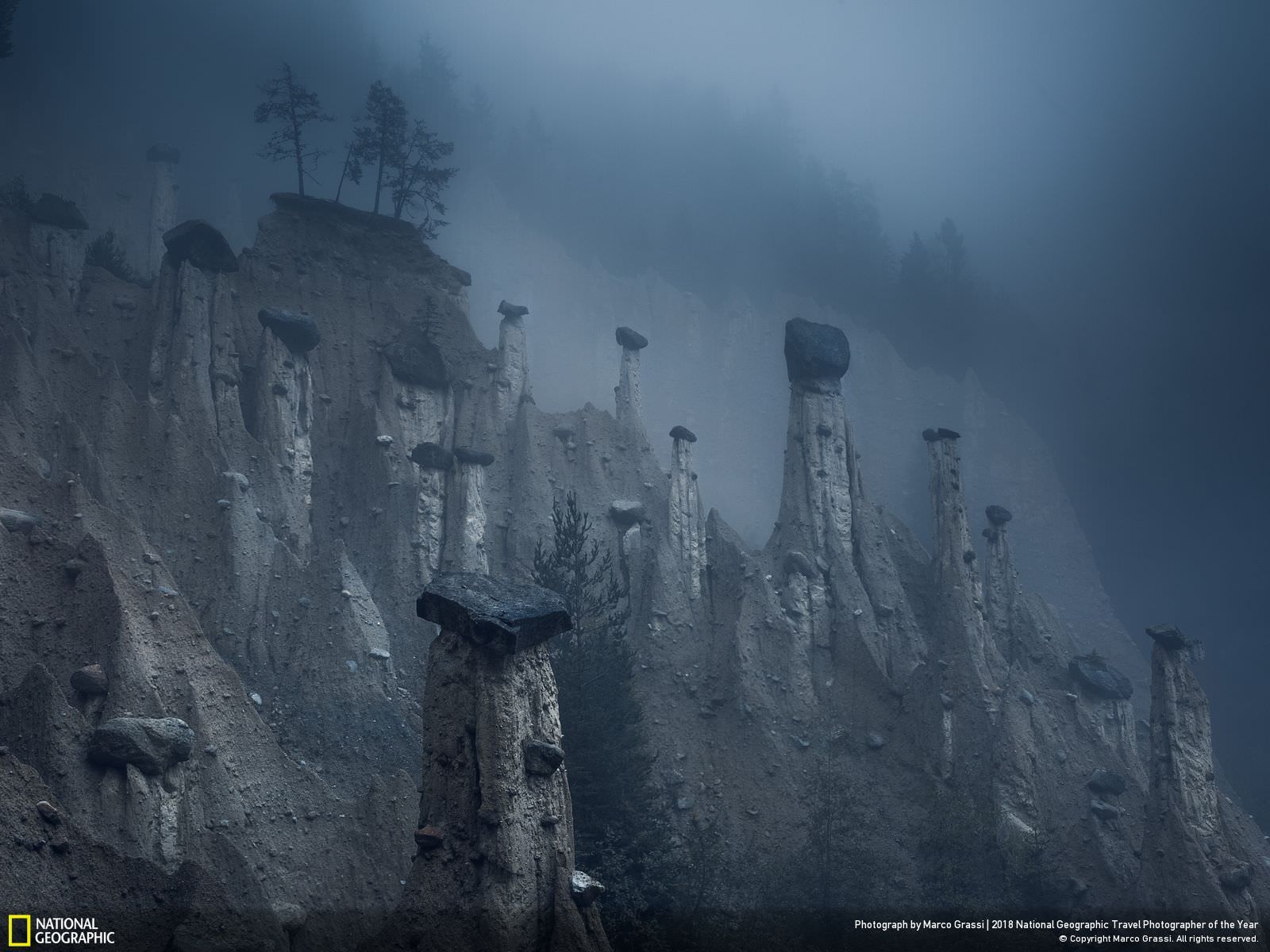 © Marco Grassi – These natural sand towers, capped with large stones, are known as the Earth Pyramids of Platten. They are situated in Northern Italy’s South Tyrol region. Formed centuries ago after several storms and landslides, these land formations look like a landscape from outer space and continuously change over the years and, more accurately, over seasons. This natural phenomenon is the result of continuous alternation between periods of torrential rain and drought, which have caused the erosion of the terrain and the formation of these pinnacles. As the seasons change, the temperatures move between extremes and storms affect the area, pyramids disappear over time, while new pinnacles form as well. 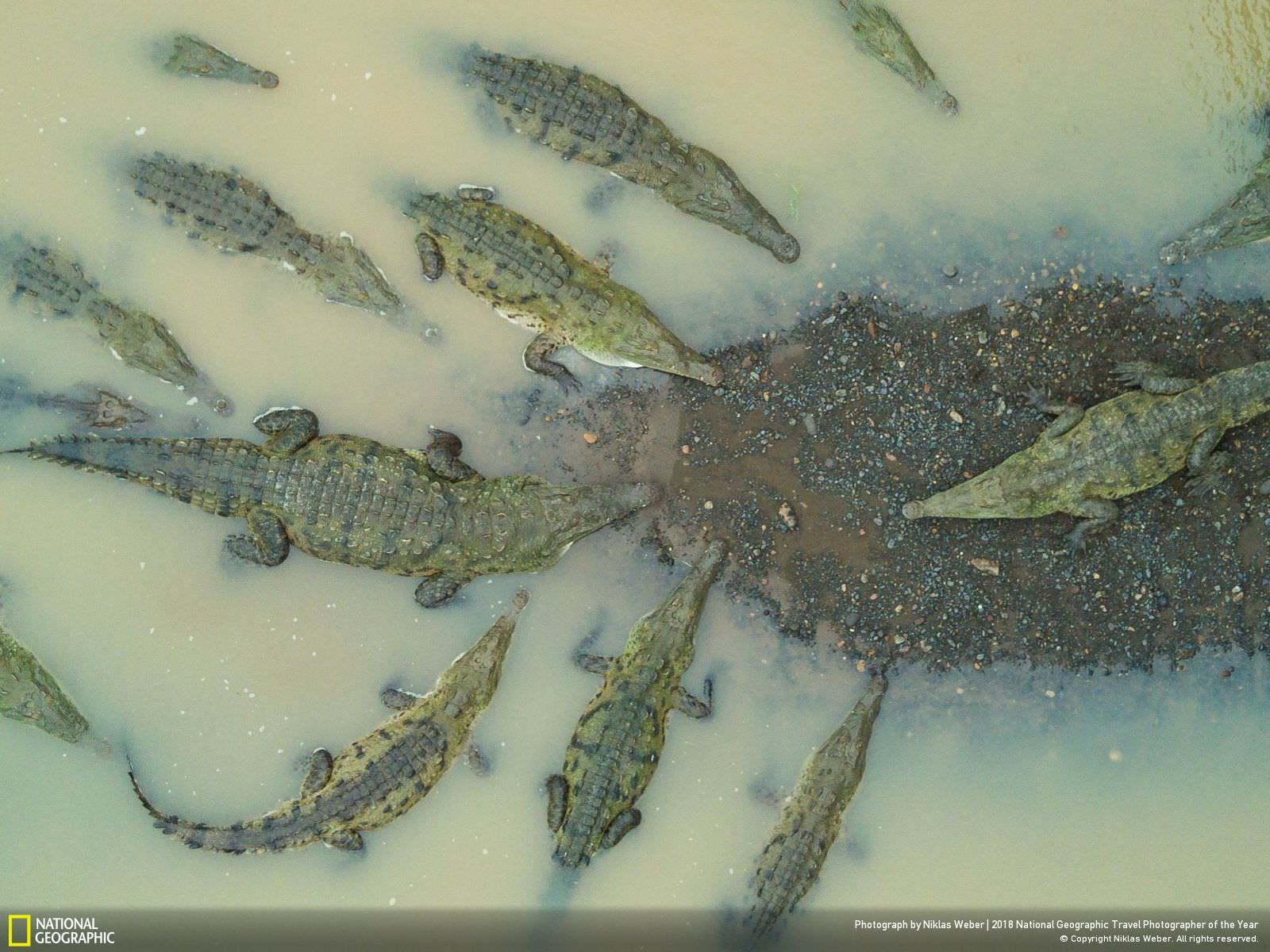 © Niklas Weber – When we arrived at the Río Grande de Tarcoles in Costa Rica, I saw a fantastic formation of the sharp-mouthed crocodiles. I couldn’t help myself, and I started my drone and began to photograph them from the air. My heart was beating like crazy because I was incredibly excited, on the one hand I was a bit scared for the drone, on the other hand I was so happy about the unique moment. 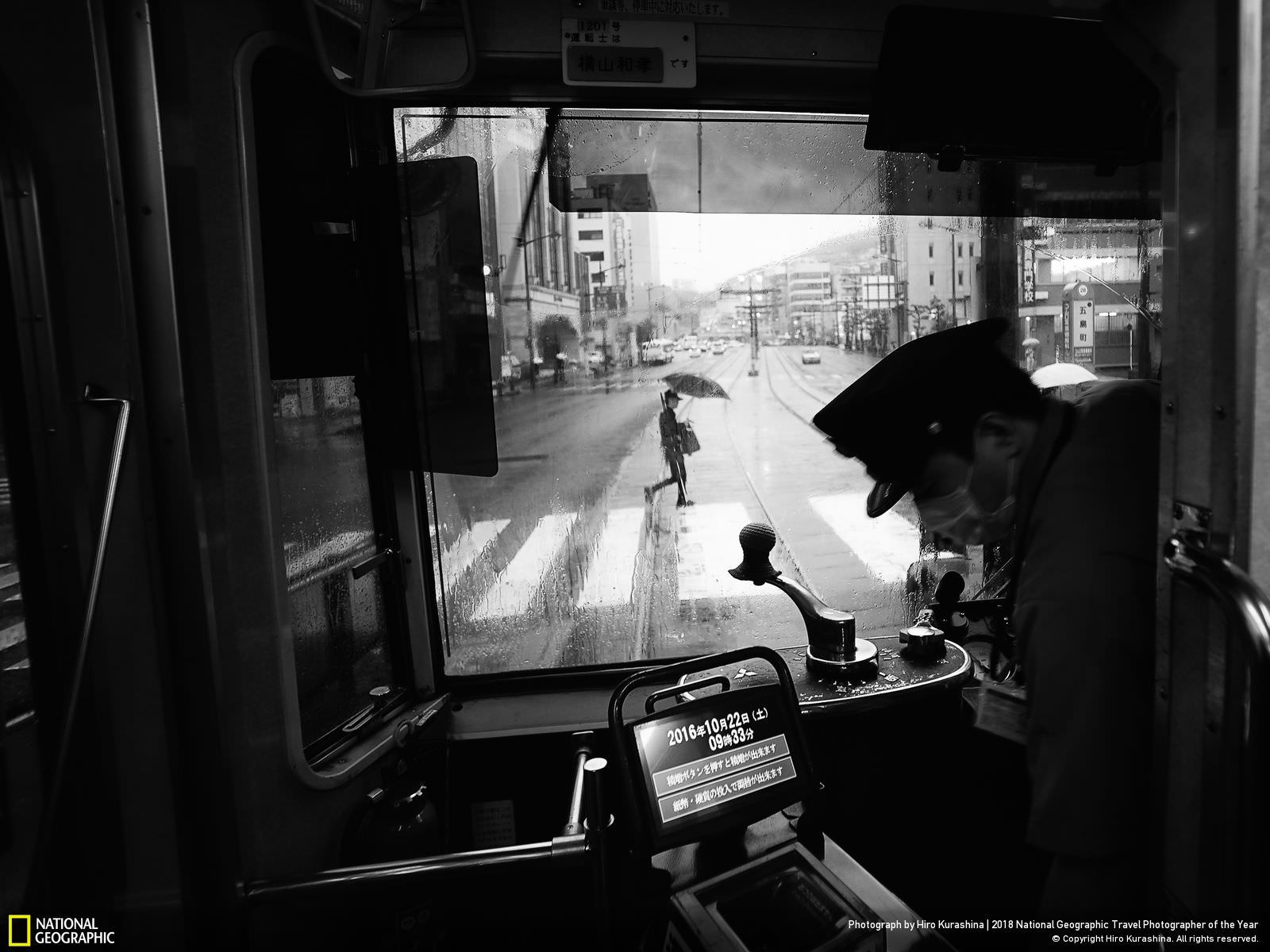 © Hiro Kurashina – This is a view of the main street from a tram in Nagasaki on a rainy day. The tram is vintage, but retrofitted with modern ticketing equipment. A conductor is no longer on board—only the lone driver. The quiet streetscape seen through the front windshield of the tram somehow caught my attention. This view presents quite a contrast to busy urban centers in Japan, such as Tokyo and Osaka. The ride on a vintage tram through the relatively quiet main street was a memorable experience during our week-long visit to the historic city of Nagasaki. 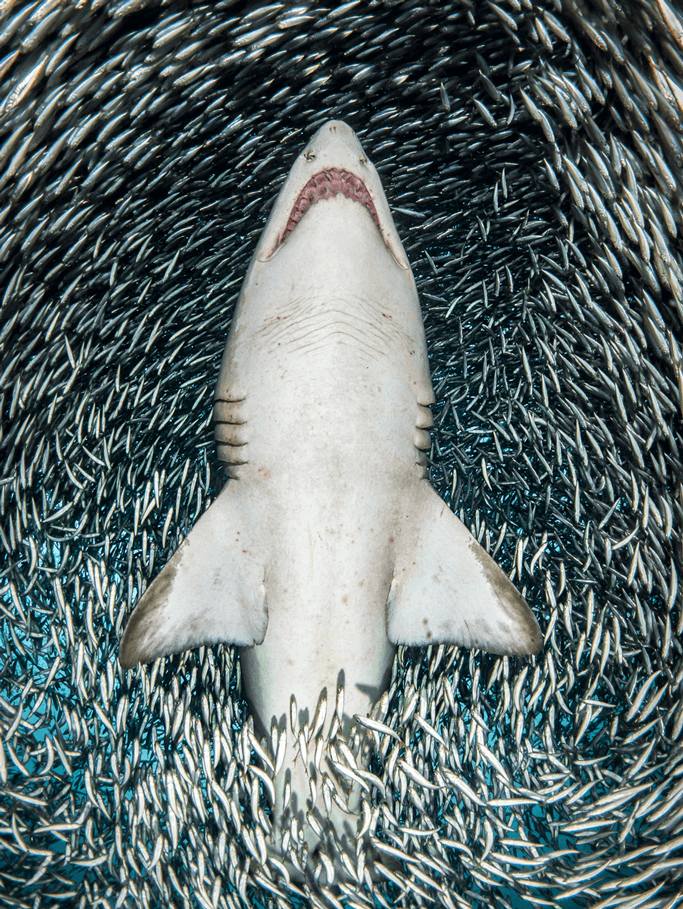 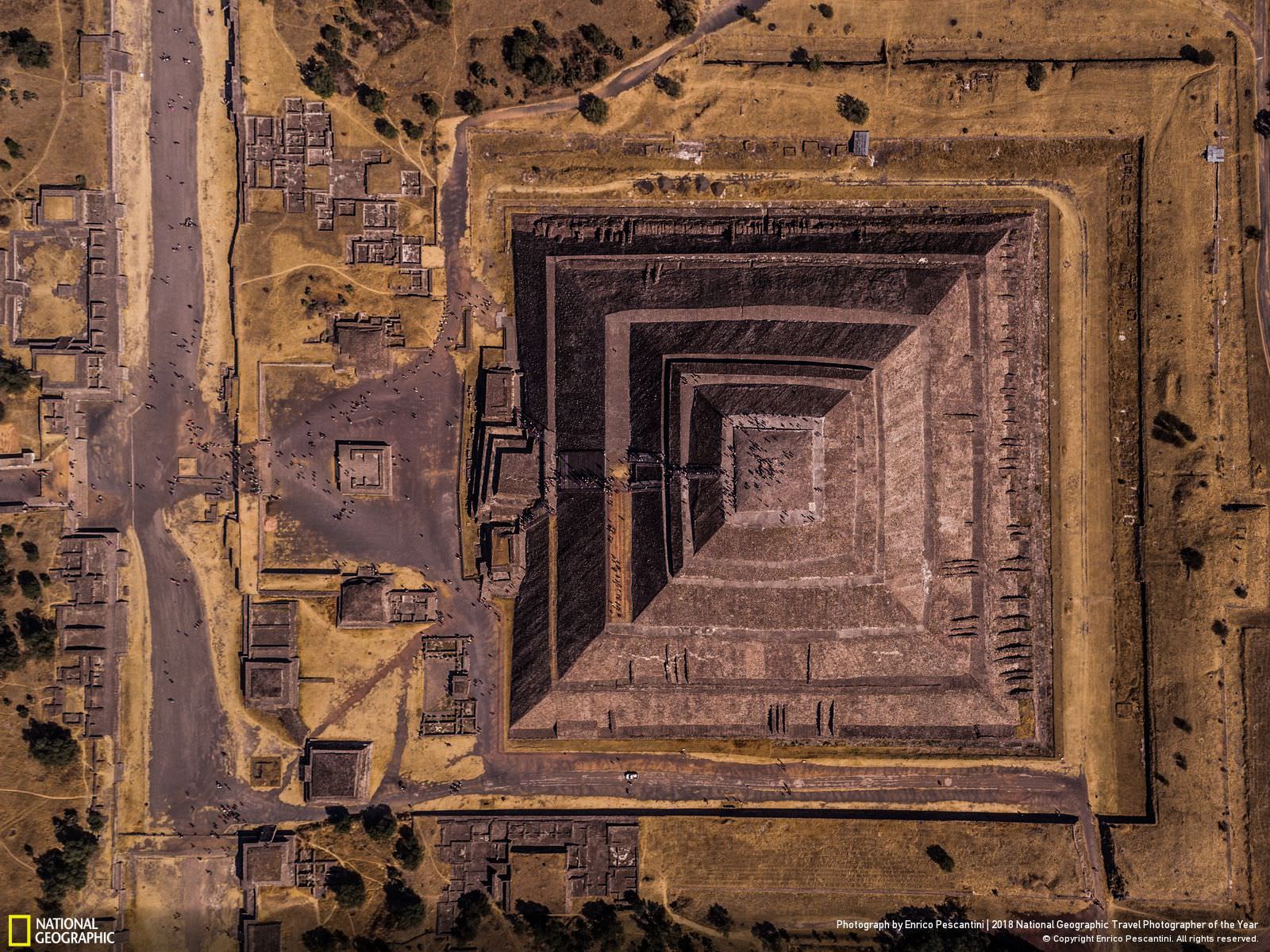 © Enrico Pescantini – Teotihuacan means ‘the place where the gods were created,’ and that’s the exact feeling visitors have when they walk along the Avenue of the Dead at this Mexican archeological site. This pyramid was dedicated to the god of Sun, and I found it mesmerizing how the rising sun in the picture conquered just half the image, while the other half is in the shadows. I have always loved archeology and ancient civilizations, so I couldn’t wait to visit Mexico and explore the remains of the pre-Columbian civilization. I planned my visit to Teotihuacan at sunrise, to get a combination of golden sunlight, play of shadows, and few crowds around. I flew my drone to see if the image I had in my mind was really out there:luckily for me, this frame was just waiting for my camera! 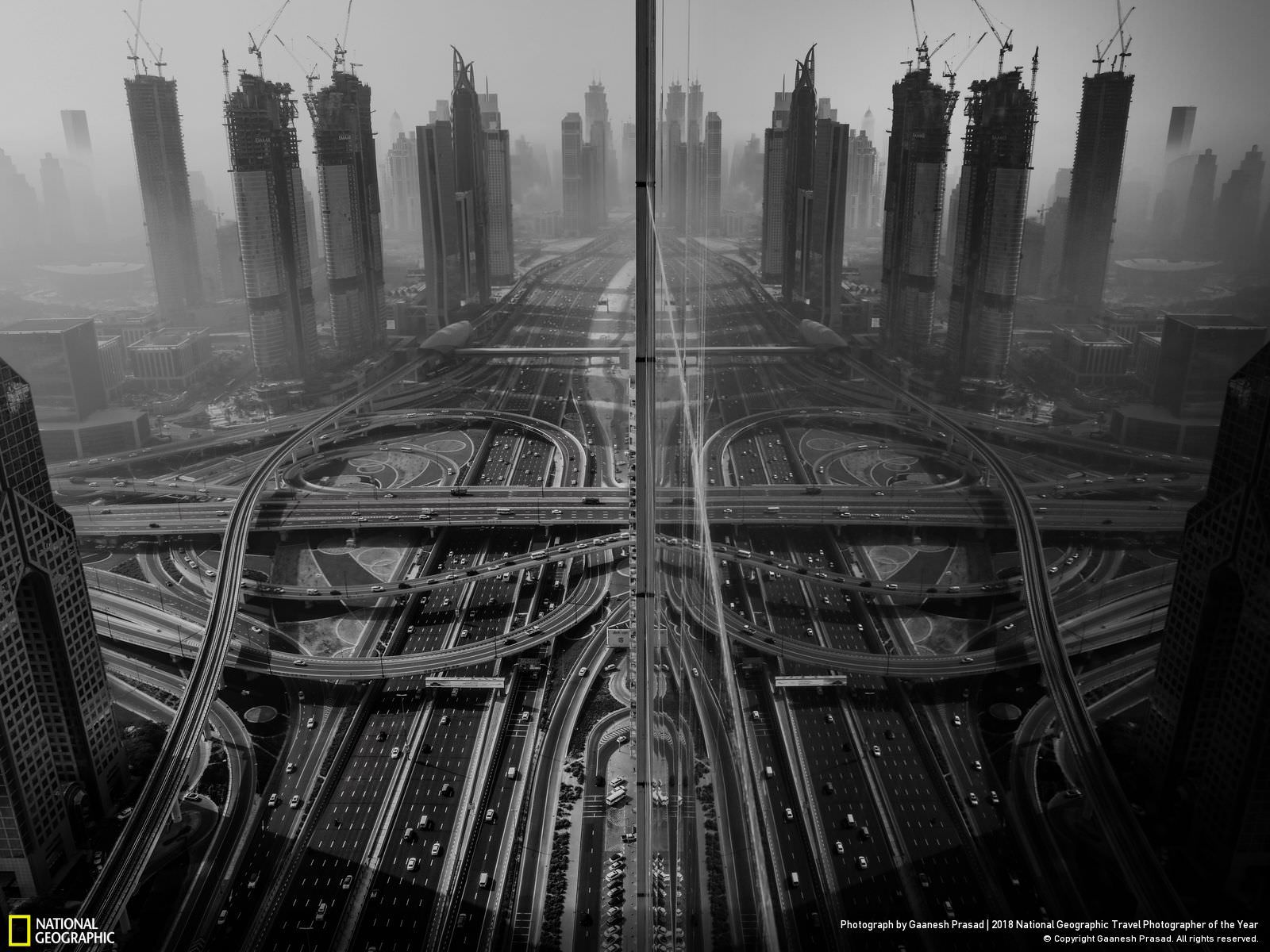 © Gaanesh Prasad – On an early morning, I wanted to photograph the fog, which is epic in Dubai every year from December to January—and almost every photographer’s dream in this part of the world. Sadly, I could not get access to the rooftop and so I peeped through the glazed window on a lower floor. I was overwhelmed and excited to see how beautiful the city looks, and my excitement was quadrupled as soon as I saw the reflection of the road and building on the building facade that I was in. I immediately opened the window to the maximum permissible amount and clicked a single shot with stretched hands. 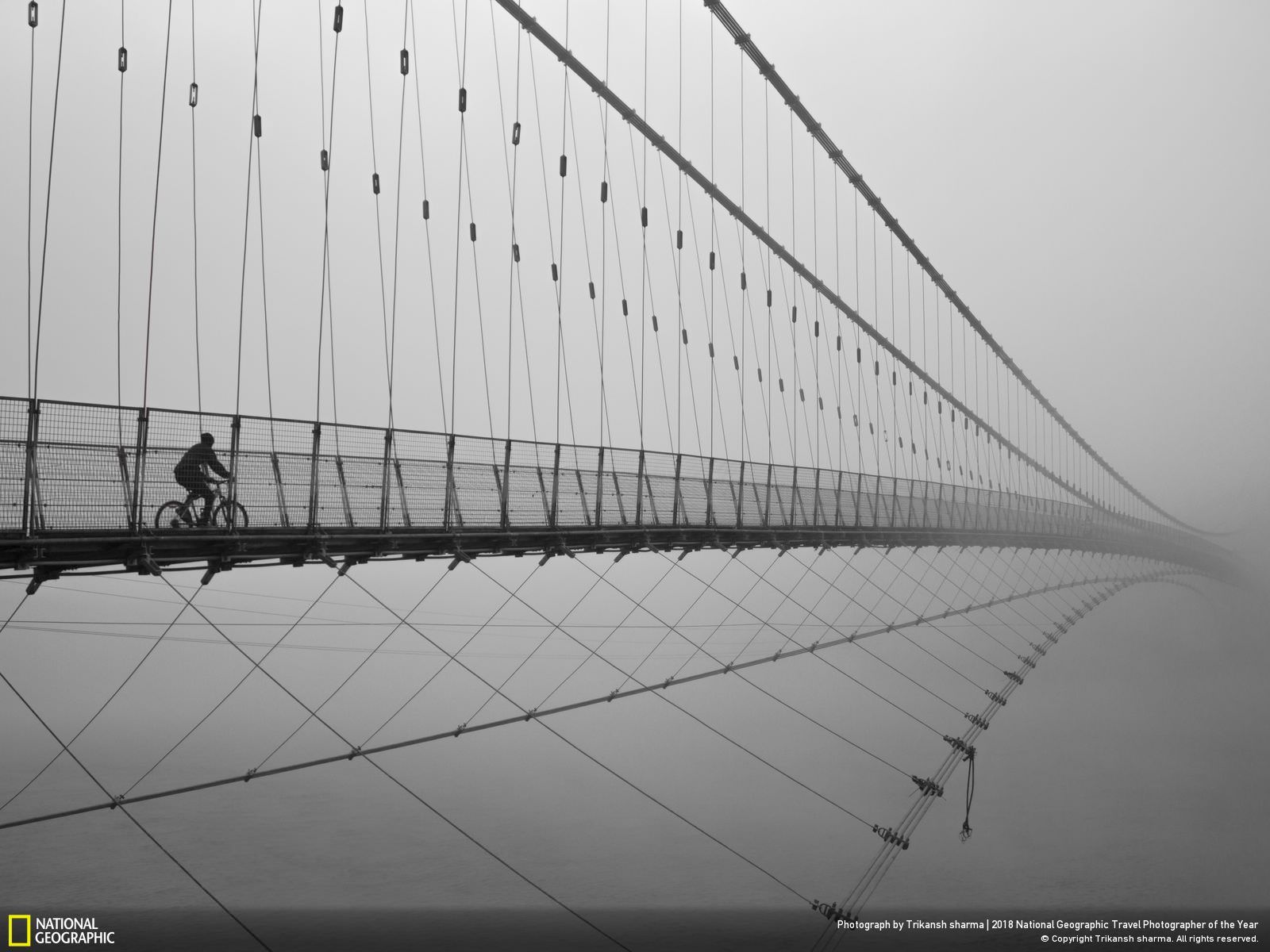 © Trikansh Sharma – A traveler is seen riding across Ram Jhula bridge in India. When I was at this location, I suddenly noticed a man on a bicycle coming towards the bridge—luckily the bridge was otherwise empty. I framed this moment in my mind—which is a good example for travel photography—and then pressed the shutter to capture the image. In this photograph, the bridge has no ending point and looks as if the man is traveling towards heaven. 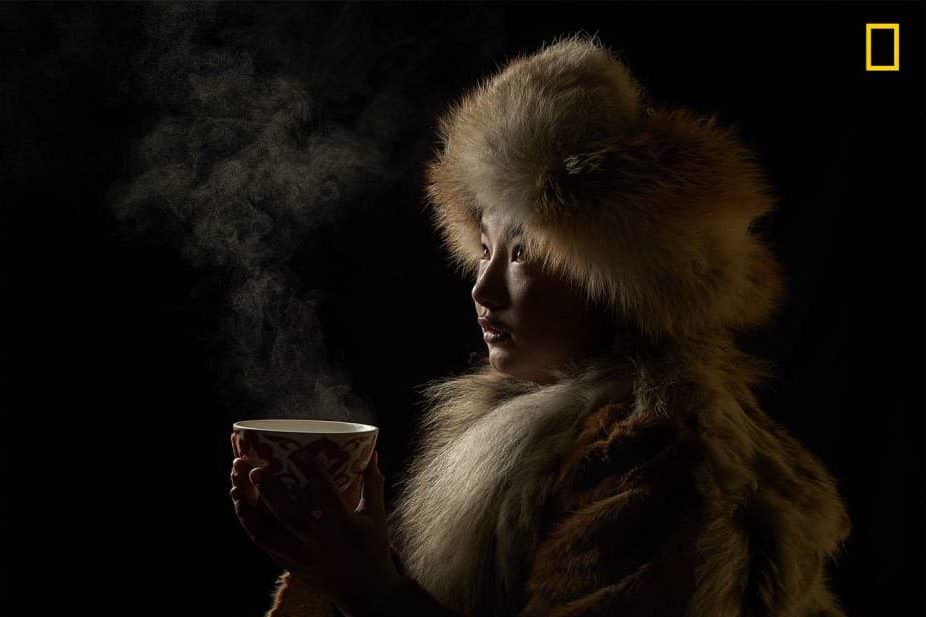 © Alessandra Meniconzi – I’m fascinated by the ancient Kazakh method of hunting with Golden Eagles. I followed a family during their migration from winter to spring camp. Mongolia is sparsely populated, but the inhabitants have a very hospitable and welcoming culture. Tea for Kazakh is one of the attributes of hospitality. It isn’t just a drink, but a mix of tradition, culture, relaxation, ceremony, and pleasure. Damel, seen here wrapped in heavy fur clothes, drinks a cup of tea to keep warm from the cold temperatures.

TATI ITAT
Estrela, Rio Grande Do Sul State, Brazil
“Leida and Laelle—I Will Lift You Up” 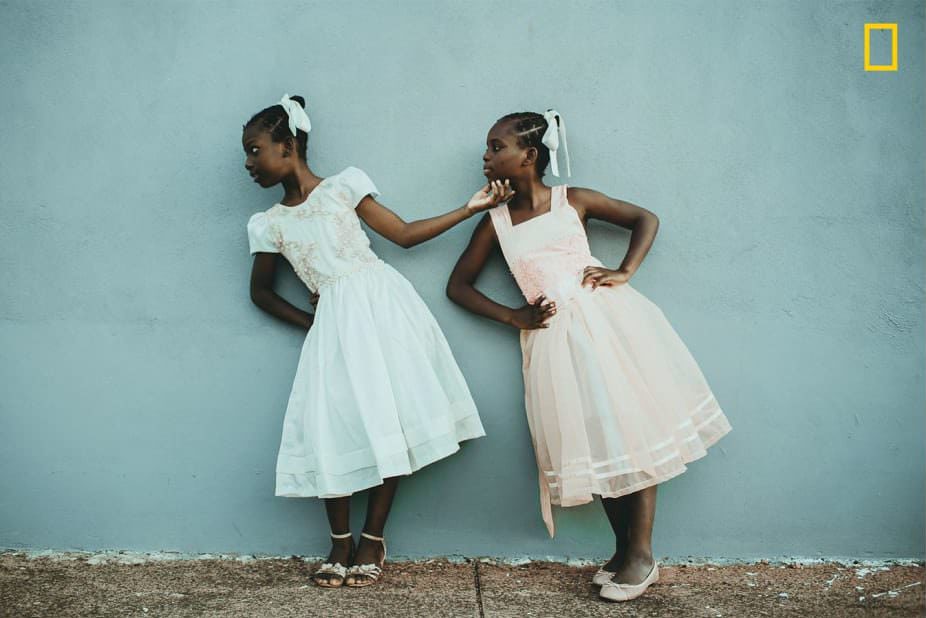 © Tati Itat – Since 2016, I’ve been involved with Haitian immigrants and refugees living in my city, Estrela. I have become friends with some families, and especially with twin sisters, Leïda and Laëlle. They say living in Brazil is like living in paradise—very different from the reality of their country of origin. They dream of becoming models and teachers, as a way to earn money to bring their other relatives from Haiti to Brazil, to live all near one another. On this day, they were playing in front of their home, improvising exercises to develop their imagination and creativity, as if they were actresses, and playing an imitation game with poses. Laëlle reached for Leida’s face and lifted her head up, showing her where she should look. At this brief moment, I took the photo. 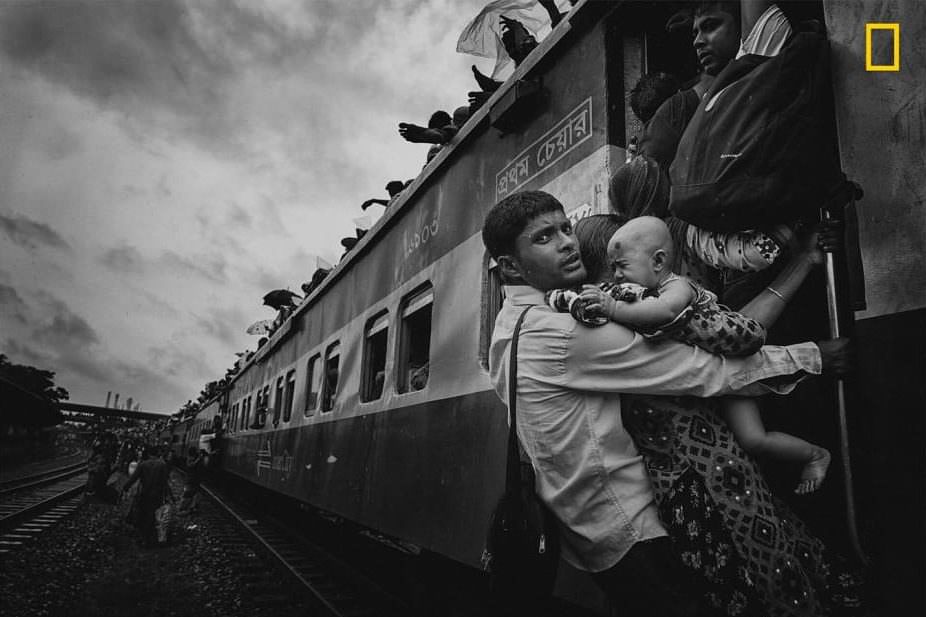 © MD Tanveer Hassan Rohan – This photograph was taken from Dhaka’s airport rail station during the Eid vacation. People were returning to their village homes to spend Eid with families, and the rush at the last hour was immense. One man caught my attention: he was dangling on a train’s handle with his family, trying to get inside the train. At that time, rain started and the train began to slowly move. The family had tickets to board the train, but couldn’t get to their seats. There are many people like him, who come to Dhaka for work—leaving their families and home villages—so when they get vacation, they don’t want to miss the opportunity to spend time with dear ones, no matter what. 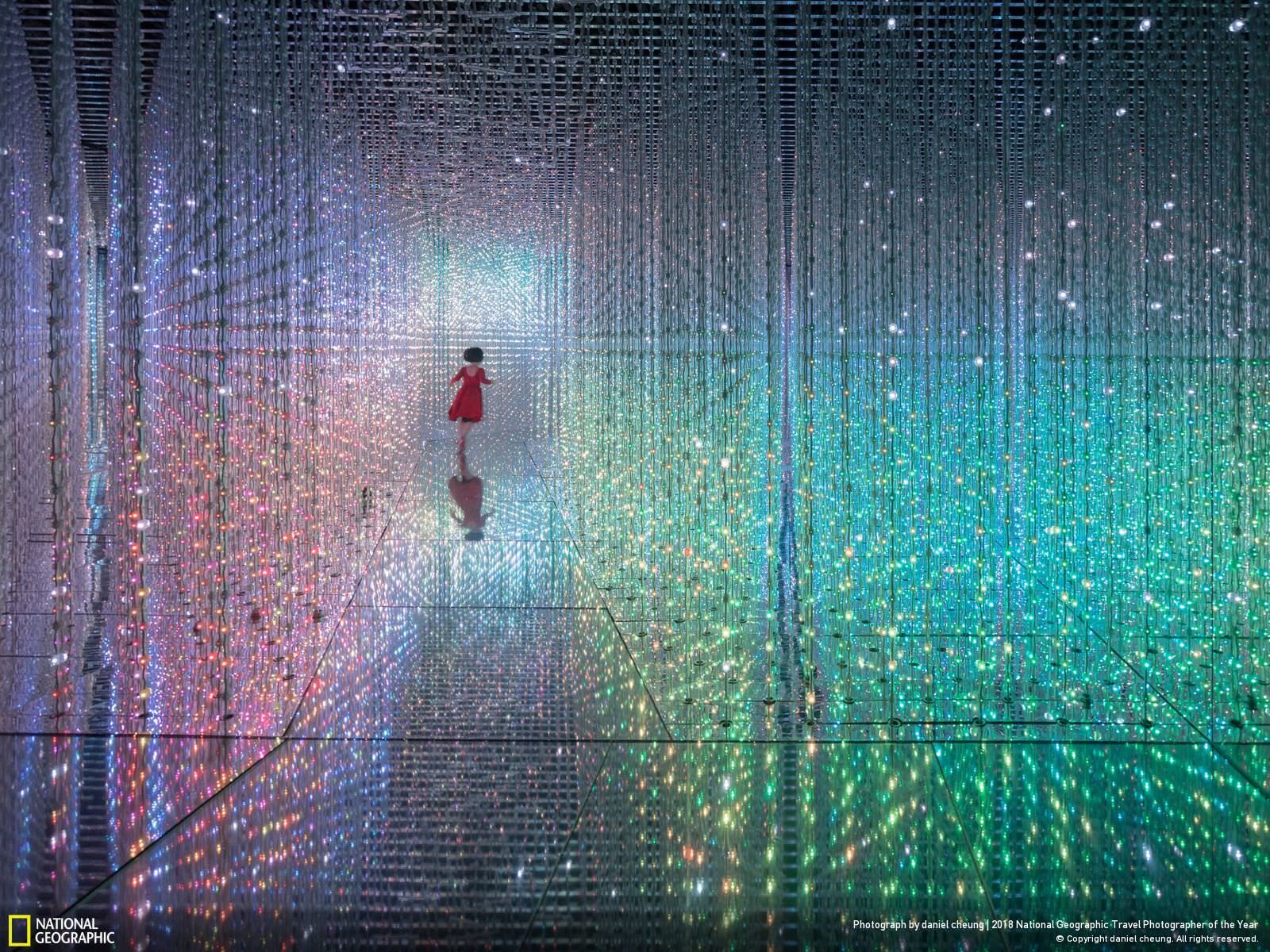 © Daniel Cheung – The light illusion is created by artwork that uses an accumulation of light points to create a sculptural body. I saw a little girl in red dress running around the space. Luckily, she ran out again at the right moment—I found this is called “the decisive moment.” I couldn’t wait to press the shutter as the lights were perfectly aligned to create a beautiful moment—like a girl crossing a time tunnel.

Be sure to check out all of the amazing photos, including the Honorable Mentions and all the People’s Choice selections. And, if you have a favorite and want to have it as your desktop or phone background, you can download wallpaper images!