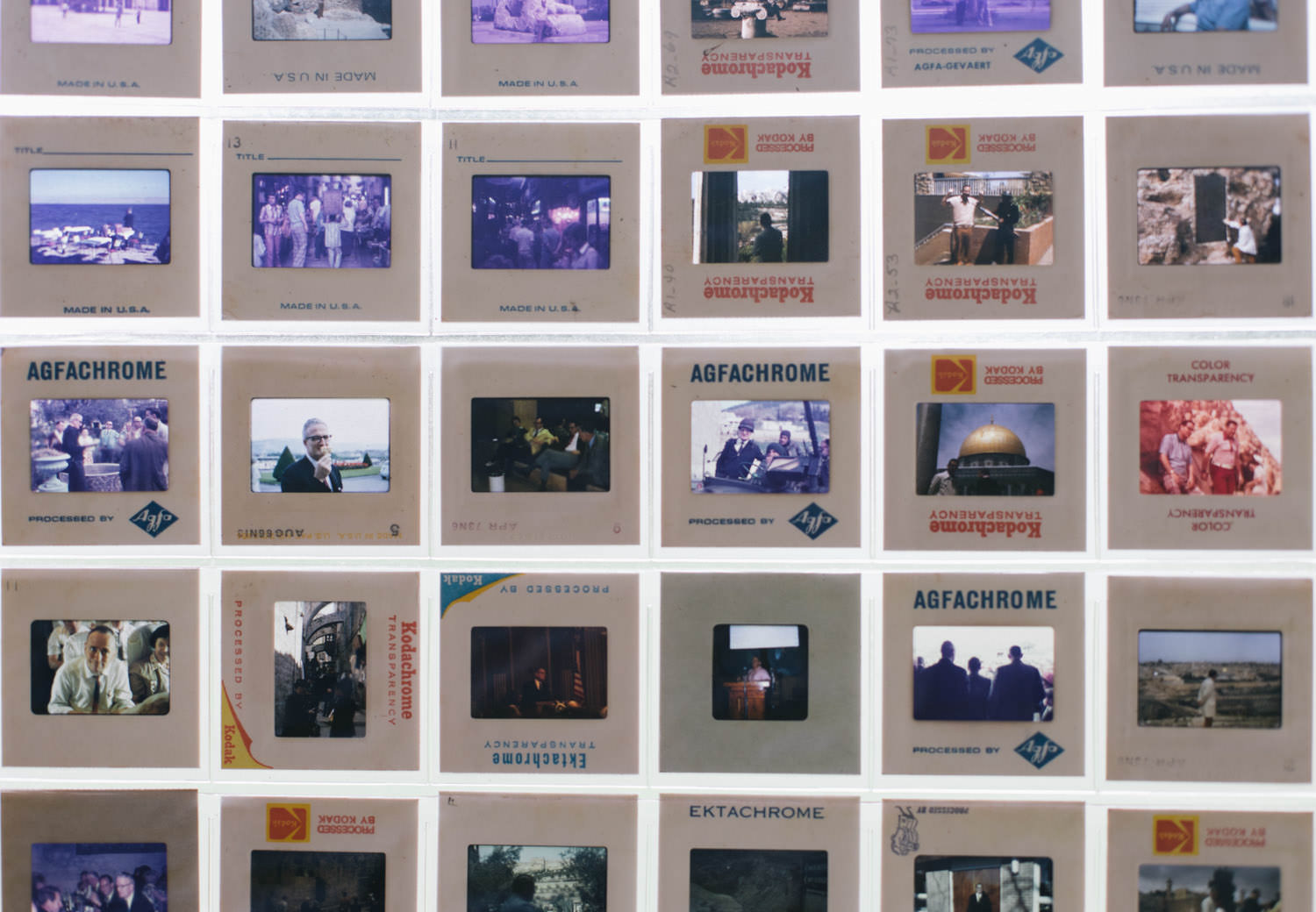 Justin Eisner is a freelance photographer and director based in Chapel Hill, North Carolina. While the bulk of his photography portfolio shares lively shots of rappers and musical artists in the heat of performance, there’s another project that’s been stealing away his time as of late.

Recently, he received a text from his mom informing him that she’d found a box of his grandfather’s old film slides. Always fascinated by his grandfather’s travels and hobbies, Justin collected the box of film to learn more.

In this interview, we learn of the steps that led to Justin’s film photography recovery work in honor of his grandfather, the John Millheim Project. We also learn what bringing these photos back to life has taught Justin about art, family, and himself.

Where were you when the idea struck?

There isn’t a singular moment to define the “light bulb” moment of this project. One thing led to another and eventually I had all the tools to make this idea a reality. One day my mom texted me saying she had found a big box of old slide film that was from my grandfather’s travels. I’ve always been pretty fascinated with my grandfather’s hobbies. He collected everything. Baseball cards, coins, stamps, photography. This was no exception to my fascination and eventually I had a box of hundreds of tiny slide film squares but nothing to watch them on. Some friends and I looked through pages of them by holding them up to the light in my room and couldn’t believe the stuff we were seeing. There was stuff from literally all over the world. China, Africa, Germany, Switzerland, Australia, the list goes on.

A few weeks later I stumbled on a projector at a local thrift store and purchased it with the intention of being able to view the slides in a more kosher fashion (rather than holding them up to the light). I thought the thing was broken til I realized I needed to get a new lens for it. I picked one up from the local camera store and next thing you know I’m staring at a portrait of MLK up on my wall. It was wild. I hadn’t seen this shot since it was in one of the roli deck looking things you drop the slides in. Honestly it was kind of a surreal moment once I started flipping through the slides.

I met a guy a little while back who works at the local hospital. We talked for a while about different things and this project got brought up. He just so happened to be needing to get rid of a bunch of the slide decks and offered them to me. A few days later I filled my car with empty slide decks and made a new friend out of it. He also had an extra scanner he was getting rid of and that’s when I found out I could digitize these little square objects. After much frustration and countless YouTube video tutorials, I finally got the scanner up and running. Now instead of the slides on the wall, they popped up on my computer screen. Another surreal moment in this project’s fruition.

When did you decide to make a series out of it?

I decided to make a series out of it when I found a scrapbook of the letters my grandfather sent my great grandmother during his time abroad. After reading through the crudely preserved post cards taped to a crudely preserved scrapbook, context of the photos were brought to light. I’m a big believer in the purpose behind something. Especially when it has to do with art. Sure, the pictures were aesthetically pleasing and looked nice. But having a background story to add to some of the photos was definitely the point when I knew I wanted to take this further.

What has it taught you about your family history, and yourself?

It’s been cool to see how great of a relationship my grandfather had with his mother. In that day and age you had to be so much more intentional about communicating with someone, especially when they were thousands of miles away. The amount of letters he sent and the substance in them is really sobering sometimes when I struggle to reply to a simple text from my mother. You take it for granted how easy it is to communicate nowadays.

What have been the challenges of developing the film? (Are you ever afraid of destroying it?)

Honestly, in the fashion that I’m doing it, the process is not difficult at all. I just have to drop four of the slides into the scanner and press a button. A few minutes later, the photos show up on my computer and it’s on to the next four. The hardest part with the project itself has been deciding on where I want to take it. There’s so many awesome variables to it between the slides themselves and the letters that I haven’t really decided on what to do with it. For now I’ve just been digitizing them and organizing them. I’ve put them up online as well, but without the letters. I’m thinking about making a physical book out of it, but I need to find the time and resources.

What have people’s reactions been to the project?

I haven’t really promoted the project too much on social media as I’m still trying to decide on the direction in which I want to take it. I have a website up as well as an Instagram, and so far people have really enjoyed seeing the photos, especially my family members. I gave my grandmother a bunch of post-card sized prints and that was pretty neat.

Do you have any advice or encouragement for those who might be getting started in new creative projects?

I think when people try to rush things that’s when they lose steam and quit. When they let their side projects become their priority and stuff doesn’t pan out in a timely fashion, it’s kind of disappointing. You put a lot of pressure on yourself because you think it’s a great idea and you want to be affirmed in your ideas. It’s human nature to desire affirmation, but that desire is elevated when you’re creating something. The things we create are essentially an extension of ourselves and any negative reaction (or not as much of a reaction as you hoped for) does a number to anyone who’s being honest with themselves.

Some advice that I would give to people who are venturing into a new “creative project” would be to go into it with an open mind. Planning is half the battle, but when new variables are introduced don’t be afraid to deviate from the “plan.” Some of my best work has been born out of my willingness to adapt and change things up.

Make your art for yourself. Don’t stray away from what you like in order to appeal to the masses. It’s exponentially easier to start with this mantra and make stuff than it is to keep up with an “image.”

Yes. I took it about two years ago when I was down in Haiti on a humanitarian outreach trip. It’s probably my favorite photo because, from a technical standpoint, it’s sound, but also the emotion shown on the children’s faces adds to it as well. For such a colorful photo their look is quite somber.

Learn how to quickly add a vintage film border to any image!